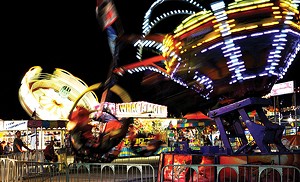 Photo by Lee Milner
The Illinois State Fair is canceled. The announcement from the state concerns both the fair in Springfield as well as the Du Quoin State Fair.

Springfield Mayor Jim Langfelder had said he hoped there would be a way to go forward with some agricultural aspects of the fair. Along those lines, the Department of Agriculture will host a Junior Livestock Expo in Springfield in September for those ages 8-21 to show animals. The 4-H General Project Show will proceed online, details are still to come according to a release.

The cancellation will come with a heavy financial cost; both fairs brought in more than 600,000 visitors last year.


“The Illinois and Du Quoin State Fairs have been some of my favorite opportunities to celebrate our agricultural communities and the residents who make Illinois so exceptional,” said Gov. JB Pritzker in a statement. “But it’s because the fairs are such a treasure to so many thousands of people that my administration, like those of our neighboring Midwestern states, must make the difficult decision to cancel the 2020 State Fairs in light of the risk posed by COVID-19. This is the right choice based on guidance from the Illinois Department of Public Health and other experts: we have to prioritize keeping our people safe. Our state fairs are unmatched across the nation, and I look forward to gathering again to showcase the best of Illinois when it is safe to do so.”

Kevin Gordon, Illinois State Fair Manager expressed disappointment. “Our staff has been working hard to top what we did last year, and we feel like we were on track to do so. With that being said, we also understand that this is an unprecedented event. We have fantastic vendors, fairgoers, partners and exhibitors that we will miss seeing this year on the Fairgrounds," Gordon said in a statement.

More from a release: If you have purchased an Illinois State Fair mega pass, admission booklet or parking pass contact the State Fair office at 217-782-6661 or email agr.fairinfo@illinois.gov.