When Springfield was chosen as the fair site, fire stations blew their whistles and people danced in the street 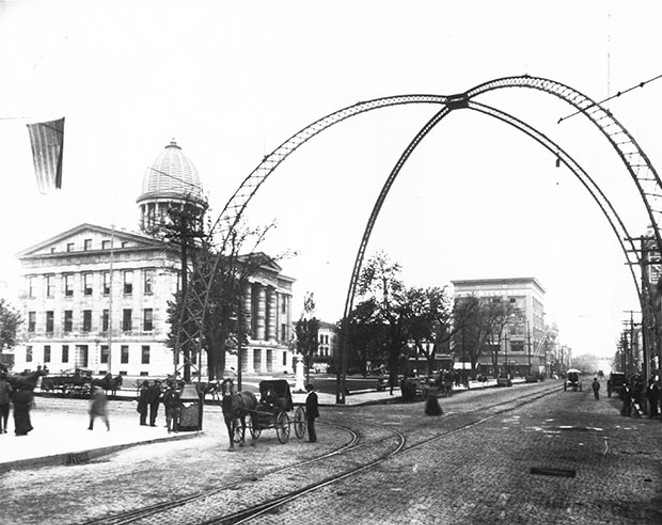 PHOTO COURTESY SANGAMON VALLEY COLLECTION
Washington Street looking west from Sixth Street in 1901. Iron arches once stood at the four intersecting streets next to the square.

Barkers called out their wares and vaudeville actors entertained spectators while carriages pulled by horses rolled down the street. Then when it was dark enough, balloons attached to small lights were released into the sky. This was the nightly scene along Adams Street and the grounds of the Old State Capitol during the early years of the state fair.

The entire downtown Springfield square was illuminated by lights placed in a circle around the dome of the Old State Capitol and strung out to the steel arches which once stood at the four intersecting streets next to the square. The arches, too, were covered with lights to make the scene more festive.

During the Gay Nineties, Springfield became a hub of activity during the fair, which was then held in September or October. Thirty to forty trains unloaded daily at the Union Depot (now being restored in downtown Springfield), where patrons could then be transported out to the fairgrounds. Residents of Springfield welcomed relatives who came to stay the entire week so they could attend the fair events daily.

The first state fair was in 1853. Called the Royal Jubilee, it was held in Springfield on a 20-acre plot, it’s boundaries being Amos and Douglas Avenues running east and west, and Washington and Monroe Streets running north and south. After the first fair, it traveled to different sites each year, hitting Chicago, Alton, Centralia, Freeport, Jacksonville, Quincy, Du Quoin, Ottawa, Olney. It returned to Springfield in 1879 and in 1880. Then in 1894, a state board in charge of the fair decided to choose a permanent location. The city of Springfield offered a site of 154 acres plus a $50,000 cash bonus, free water and a lighting system as an incentive for the board to choose the city as the site. Also considered were Chicago, Aurora, Peoria, Decatur and Bloomington.

When the announcement was made that Springfield had been chosen, fire stations blew their whistles and people literally danced in the streets. That night the Leland Hotel catered a banquet and party held by leading Springfield citizens in celebration of the announcement. 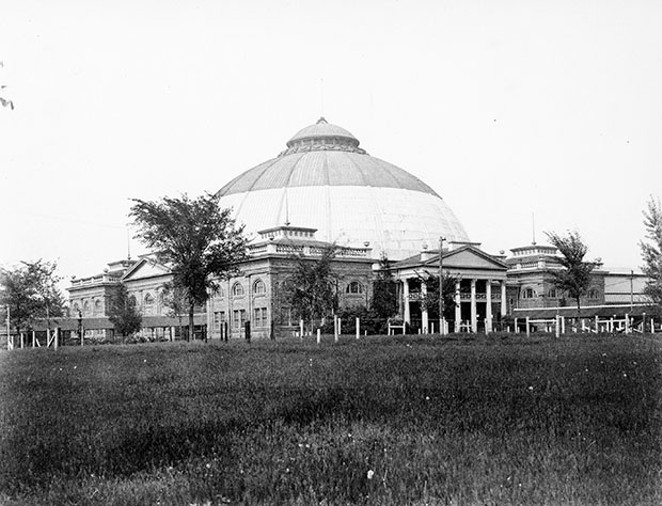 PHOTO COURTESY SANGAMON VALLEY COLLECTION
The Dome Building. Originally the Horticulture Building at the 1893 World’s Fair in Chicago, it was moved to Springfield in 1894 and was reconstructed for the 1895 fair. This building was lost to fire on August 11, 1917.
The first fair at its permanent location was in 1895. It was a spectacular event. Standing out among the buildings was the Dome Building, a massive structure with a glass and copper dome that had originally been built in Chicago for the 1893 World’s Columbian Exhibition held in celebration of the 400th anniversary of Columbus’ discovery of America. The state fair board bought the Dome for $69,000, had it dismantled piece by piece, and reconstructed it in Springfield. This was the second largest dome in the world, the first being in Petrograd, Russia. It’s white-columned entrance and covered walkways connecting it to other buildings made it the focus of the fair. Inside, horticultural exhibits pleased the fairgoers.

It was again the center of attention on a hot August night during the middle of World War I. Fifteen hundred soldiers who were preparing to enter the war had been stationed in the building; at 6 p.m. flames were spotted on the second floor. The fire was believed to have been caused by defective electrical wiring or sparks from a small furnace. Soldiers climbed up to the site and attempted to put out the fire, but within 15 minutes they had to retreat. The wooden floors, wooden cornices and wooden porticos had caught fire too quickly. Other soldiers entered the offices and were able to rescue the muster rolls of the infantry corps and some of the furniture.

Within 20 minutes firemen arrived and sprayed the flames, but the intense heat had already caused the steel girders to begin bending. Thirty minutes after the fire started the huge glass dome crashed to the ground; the noise was heard blocks away.

PHOTO COURTESY SANGAMON VALLEY COLLECTION
The Exposition Building was built for the 1895 fair. It was the first building to be constructed on the grounds and is still standing.
Springfield citizens came out in droves to see what the intense light was; infantrymen assigned to guard duty had to turn them away. But the next day a steady stream of curious people came out to the site to see their once famous building now a mass of twisted steel beams and smoldering rubble.

The Exposition Building was also built for the 1895 fair at a cost of $67,000. It was actually the first building to be constructed on the grounds and is still standing. Decorated inside in red, white and blue bunting and draped with American flags, it displayed the many wares of the merchants who traveled to Springfield to show off their new products.

The main fair entrance at that time was at the intersection of Sangamon Avenue and Peoria Road. (The main gate, newly restored this year, was built in 1910.) Admission was 50 cents for adults, 25 cents for children, 75 cents for one person on horseback and $1.25 for four people in a carriage. The main attraction in 1895 was the “Fall of Pompeii” exhibit. This was a body of water 250 feet long and 75 feet wide which was used to represent the Mediterranean Sea. The fall of Pompeii was graphically depicted. The fair also included a Midway with vaudeville acts, circus attractions and lots of food.

Although the fair was held in the fall when the weather was cooler, drinking water was necessary. Huge barrels of water with tin cups attached to them were placed throughout the grounds. The fairgoers back then wouldn’t have arrived wearing shorts and halter tops. Women dressed in long, fancy dresses and wore feathered hats; men wore suits, bowler hats and carried canes.

By the time the 1896 fair arrived, several new buildings had been built. Machinery Hall, a domed building with huge arched windows and a tower, held the exhibits of all the farm machinery and the agricultural displays. In the 1960s this building came to be known as the Farm-a-rama Building. The Poultry Building was also built at a cost of $63,000. This building, now used for storage, still rests atop the hill overlooking Happy Hollow.

The Sangamo Club built its country club at the fairgrounds in 1896 and boasted the first golf in Springfield. It stood where the present fire station is located.

Colorful picture postcards could be purchased to send to friends back home. Saying “Greetings from Springfield,” the cards pictured scenes such as park areas inside the fairgrounds or some of the many buildings on the grounds.

An early fairgoer might not recognize the fair today, but a few spots would be welcome sights to their eyes, namely the Poultry Building and the Exposition Building. And even though the dates have been changed, the festivities at the Old State Capitol have been abandoned, and the fairgrounds has expanded, they would still welcome the entertainment and food provided by a tradition they began way back in 1895.

From today: Cinda Klickna taught high school English in Springfield for many years and  recently retired as president of the Illinois Education Association.  She has written freelance articles, many for Illinois Times, since the 1980s.

This article was first published in Illinois Times Aug. 15, 1985.