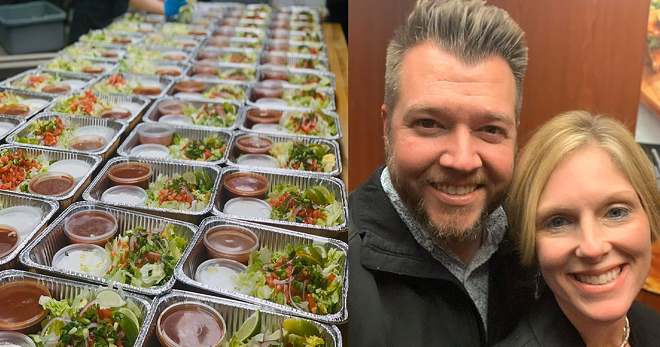 Restaurant servers work for tips; their paychecks can be virtually non-existent once deductions are accounted for. And chefs and cooks largely live “paycheck-to-paycheck,” as Brian Reilly says. “One week can really make a difference with day-to-day bills.”

Reilly, of Dawson, is the owner of Cured Catering, a venture he started with his wife Melissa about three years ago. Dining rooms are shut down as officials try to stem the spread of coronavirus, which means many in food service are out of work. The Reillys are going through their own hard time, as weddings and other events booked out into the summer months are being canceled.

Reilly started Staff Meals after realizing many people in the industry would be cash-strapped. The idea is to make meals for those out of a job. Donations go to cover some of the associated costs, and Reilly has used some food he had in stock. Getting others to chip in has proven successful. “I think so many people just want to help, but it’s hard to find a way to help from the confines of your home,” says Reilly.

Reilly says with the help of his wife and a couple others he was making 500 meals a night that were picked up free of charge. But, there have been challenges, like the venue. With the “stay-at-home” order announced, he lost access to the kitchen he had been using. It only took about a day to find the next best fit. Reilly recently found a kitchen in Riverton to use, and he hopes to be up and running again next week.

In the meantime, a second effort has sprouted up — Staff Meals x2 is providing meals out of Casey’s Pub (2200 Meadowbrook Rd.) on certain nights. Reilly has donated some of the ingredients and the two efforts are running in concert. There is a Facebook page for both, where people can message to get on a list to pick-up the meals.

On Wednesday, Gov. JB Pritzker announced a new application to address loss of income and wages in the hospitality business. In Springfield, District 186 is providing packed breakfasts and lunches for kids. And the Central Illinois Foodbank has a “food locator”, while micro-pantries continue to spread throughout the city as citizens take care of each other on their own behest.

Reilly says those seeking food through the Staff Meals effort won’t be asked to prove the circumstances of their employment, though it is meant for laid-off workers from the service industry. And there’s another target consumer: health care workers, “So they can put a hot meal on the table and not have to worry about cooking for their family while they are on the front lines.”