Springfield's economy gets a wake-up call 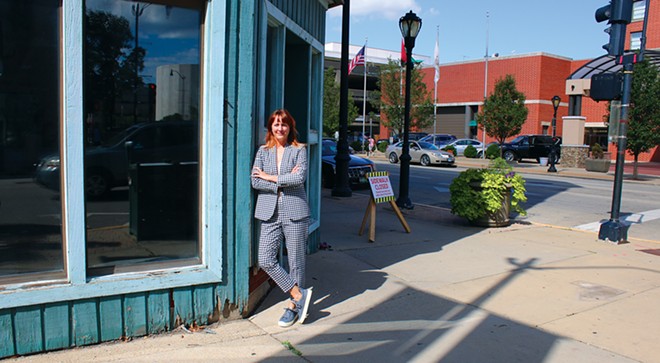 Photo by Joseph Copley.
Lisa Clemmons Stott, executive director of Downtown Springfield Inc., has lately been fielding lots of calls from entrepreneurs with ideas for redeveloping downtown property. Here she stands at Seventh and Adams in front of a building that was once the home of Harry S. Clayton Furniture and, more recently, Jade's Emporium. The building has been purchased by new owners with plans to convert the upper stories to 10 new apartments.

In the five months since the COVID-19 pandemic hit the U.S., Springfield's economy has suffered in roughly the same ways as most other cities in Illinois and the nation. Owners of beloved mainstay restaurants – one of the industries hit hardest by the pandemic – have called it quits, and retail has been forced to come up with unique solutions to stay afloat in an economic downturn with no end in sight.

At the same time, local consumers' response to COVID-19 has varied widely, from spending more than usual on local businesses if they've been able to hold onto their jobs, to belt-tightening if they haven't been so lucky, especially as the extra $600 per week approved by Congress in the early days of the pandemic expired earlier this month.

The Springfield metro area has seen a 31% drop in employment in the leisure and hospitality sector, according to the latest data available from the federal Bureau of Labor Statistics. Alarming as that figure is, it's a recovery from the nosedive measured in April, when leisure and hospitality employment in the Springfield region had dropped off at a staggering 61% amid Illinois' peak COVID-19 infections and hospitalizations, when bars were still completely shuttered and restaurants could only offer meals for pick-up and delivery.

Perhaps more than any other metropolitan area in Illinois, Springfield's economy is reliant upon tourism – whether from those traveling to explore Abraham Lincoln sites, or the hundreds of lawmakers, lobbyists and other staff connected to the General Assembly's usual legislative session, always looking for dinner and drinks.

"One of the stark realities of COVID is how much we depended on our tourism economy," Clemmons Stott said. "We've lost millions of dollars due to loss of hotel rooms. We're not able to host conventions, the legislature's [not in session], we're not able to attract the million tourists that come to Lincoln sites every year. Downtown businesses didn't realize how much we depend on those tourists until they're taken away from them."

The cornerstones of Springfield's economy – state government and health care – are unlikely to disappear in the long term, Springfield Sangamon Growth Alliance President and CEO Ryan McCrady said. He acknowledged the COVID-induced shifts like the Hospital Sisters Health System laying off 10% of its staff earlier this summer and a large amount of Springfield-based state employees working from home for the foreseeable future will force businesses to rethink "point of delivery," whether for food, retail items or services.

"The retail environment is set up based on the way customers behave," McCrady said. "I think behavior is going to change. People are not going to act the same post-pandemic as before."

But McCrady agreed with Clemmons Stott, saying Springfield's economy should build resilience while focusing on its own residents – and attracting new ones.

"I don't think we can count on the things that we've counted on forever," McCrady said.

Aside from hospitality and leisure, the Springfield metro area has also seen significant drops in the construction and manufacturing industries. However, BLS data show an 18% rise in "information" jobs from June 2019 to June 2020, outpacing all other central Illinois metro areas, many of whom have seen big drop-offs in those job types, which include computer-based work that can be done from home.

Clemmons Stott said permanent shifts in both workers' desire to work from home and employers' willingness to let them could be a net positive, especially to downtown Springfield. She pointed to two studies focused on Springfield in the past decade, each showing that there was a market for more residential housing in Springfield's downtown area and that more full-time residents could build up local businesses.

Clemmons Stott imagines the selection of vacant property downtown being turned into everything from more apartments to businesses in any traditional downtown – including a bodega, a pharmacy and a space that could host a farmers market when the weather turns cold.

And she's not alone. Clemmons Stott said she's had a record number of would-be entrepreneurs contact her about new ideas this summer, even in the midst of a global pandemic and recession.

Earlier this summer, an article from Business Insider made waves locally after naming Springfield the best city in America to relocate to after the pandemic subsides. Both Clemmons Stott and McCrady said they hope that prediction bears out.

"Communities like Springfield have an opportunity to attract residents as we go through and hopefully come out of this pandemic," McCrady said. "The world's going to look different than it does today...people are going to have a different value proposition when they decide where they want to live and businesses will have a different value proposition when it comes to where they want to locate."

Naturally, McCrady hopes it's in Springfield.

Hannah Meisel is a journalist with nearly seven years of experience reporting on Illinois government and politics.