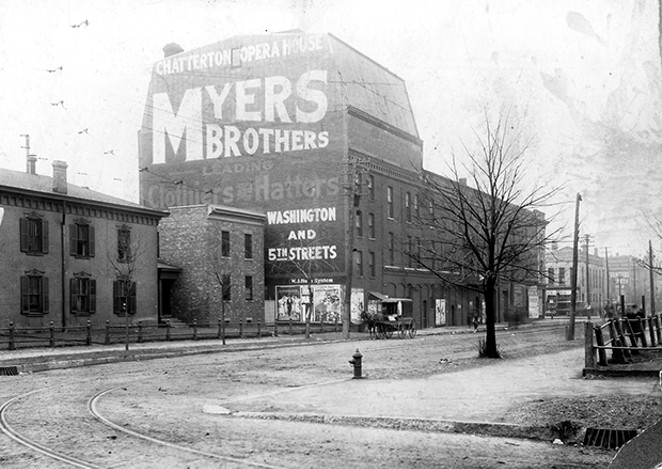 Courtesy Sangamon Valley Collection, Lincoln Library
Chatterton’s Opera House, on the southeast corner of Sixth and Jefferson, entertained Springfield for 45 years, from 1879 to 1924.

Springfield residents are entertained at our various venues: the Hoogland, the Muni Opera and the Legacy Theater. Shows also come to the Bank of Springfield Center, what Bob Hope during a performance there in 1979 called a “gorgeous garage.” But during the 1800s, Springfield was a mecca of theaters, opera houses, halls, saloons and stores that offered entertainment of all varieties.

This was the entertainment that citizens enjoyed, long before motion pictures led to the building of movie theaters.

From 1855-1879 patrons were entertained at Watson’s Hall, Cook’s Hall, the Metropolitan, Burkhardt’s Hall, Concert Hall and Rudolph’s Opera House as well as areas within stores and saloons. Theaters were often located on the second or third floors of buildings. The American House, a hotel owned by Elijah Iles, offered plays in the dining room. One of the most popular sites was Chatterton’s Opera House, which opened in 1879 and provided entertainment to Springfield residents for 45 years, closing after a fire in 1924.

It was known as the place where anyone who was anyone came. Famous, up-and-coming and already established “stars” came to Springfield as they traveled the performance circuit between St. Louis and Chicago.

Chatterton’s stood at the southeast corner of Sixth and Jefferson, where the Abraham Lincoln Presidential Library now stands. Originally the site was where Rudolph’s Opera House was located, built in 1866 by Rupert Rudolph, a master brewer at Reisch Brewery, for a reported $160,000. After his death the opera house was owned by George Bunn, Sr. A fire in 1876 destroyed most of the building but it was rebuilt. Three years later it was sold to George Chatterton who owned a jewelry store on the west side of the square.

Chatterton’s could hold 1,500 people, 600 on the main floor with red plush seats. The balcony had wooden seats, all surrounded by gilt and cherubs with a large chandelier hanging from the middle of the ceiling. On a night of a play, the livery cabs lined up to drop off the well-dressed patrons. 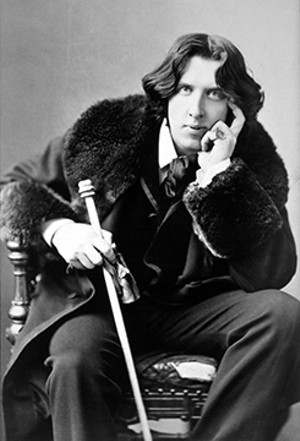 Photo By Napoleon Sarony
Oscar Wilde in 1882, the year he appeared in Springfield.
Plays drew huge crowds. Of course some of the 19th century actors may not have recognizable names today. But other names are still remembered. John Phillip Sousa and his 60-member band performed six times between 1895 and 1911 at Rudolph’s and Chatterton’s.

Beecher, a minister and brother of Harriet Beecher Stowe (author of Uncle Tom’s Cabin 1852), had a “full house” for his $1 per ticket lecture on “Ministry of Wealth” on March 15, 1877. Nine years later, April 7, 1886, he returned to present his lecture, “Reign of the Common People.” He was accompanied onstage by John Palmer, the former governor, who introduced Beecher. For an hour and 45 minutes, Beecher outlined the history of learning that was once only open to men and the rich, and he expounded on the importance of education: “Men want to go up and the only way to go is through the schoolhouse. The interest of government demands the education of people.” The Illinois State Register reported that “he was listened to with the utmost attention.”

Oscar Wilde – in Springfield on Feb. 27, 1882 – garnered quite a bit of newspaper coverage. Wilde had been traveling throughout America speaking about the English Renaissance, a movement that focused on aesthetics and the arts. Wilde’s 11-month speaking tour is documented in Declaring his Genius – Oscar Wilde in North America by Roy Morris. In some cities he had been welcomed with receptions by city leaders and women’s groups; in others he was met with catcalls. His performances elicited either enthusiasm and applause or disgust and booing. Author Walt Whitman toasted him, while author Ambrose Bierce called him a fraud.

Wilde was only 27 years old when he was touring America and was known for his poetry and novels (The Picture of Dorian Grey) but probably even more for his long hair and flamboyant dress. He wore black silk stockings and satin knee breeches, often sporting a feather or huge sunflower stuck in his lapel.

Wilde’s homosexual life was alluded to in newspapers. Then homosexual behavior was illegal. Later in England he was found guilty of “gross indecency” in 1895 and sentenced to two years in jail with hard labor. Wilde’s young male followers were described as “pallid” but with rouge on their cheeks, hair cut with bangs, a style many associated with homosexuality.

In Springfield around 250 people showed up at Chatterton’s that could hold 1,500. They heard Wilde speak about the English Aesthetic Movement and the importance of art.

Wilde was given less than glowing coverage in all the Springfield papers. The Springfield Republican said, “Wilde is a secondhand fool who has written verse that he will be ashamed of when he gets older.” The Springfield Register described him as having a “melancholy cast of countenance,” and the Springfield Journal said Wilde had “created a furore(sic) among all classes” and called him an “exaggerated boy of two or three years who has suddenly expanded to the size of a man, small clothes, flowing locks and all.”

His speech focused on art: “It is my purpose to tell you …. the aesthetic movement has a very practical object. We are now trying to bring together the handicraftsman and the artist as they were in the Grecian art… we are not opposed to machinery and new inventions.” But, he says, “Shrieking slander through a tube or speaking folly through a wire is no benefit to the world.” For children he claimed, “They should be taught some art to make them industrious and give them something to look forward to.”

At few years later in 1885, humorist Mark Twain drew the largest audience in the season at Chatterton’s. He was accompanied by author George Cable. The Springfield Journal contrasted the two. Twain gave “a droll recitation of his own funny stories and ended with a ghost story that was impressive as well as vehemently ludicrous.” Cable delivered part of his novel, Dr. Sevier, “with realism and wondrous grace.” Whereas Cable was “precise, alert with a voice full of quavers,” Twain is like “the man from way back who has sat down by the stove at the corner grocery, gathered his cronies about him and is telling a story as only he can tell it.”

Cinda Ackerman Klickna taught high school English in Springfield for many years and is interested in the many people – authors, actors, presidents, etc. – who visited Springfield.

Cinda Klickna is the Secretary-Treasurer of the Illinois Education Association.
More