Hunt no more. The Mushroom Farmacy takes a favorite food out of the woods. 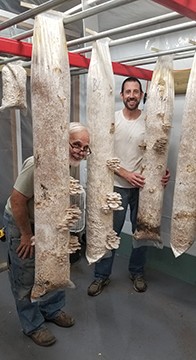 Ben Kruger, left, and August Jones in the colonization room with oyster mushrooms

Now that cooler fall temperatures have finally set in, foodies in the know will soon be enjoying one of autumn’s most delectable seasonal offerings. Wild mushrooms pop up seemingly overnight in local woodlands and farm fields, waiting to be plucked by an experienced mushroom hunter and taken home to be fried in butter or stirred into savory soups. Unfortunately, wild mushrooms can be as tricky as they are delicious. Their growth is highly sensitive to temperature and moisture, and only those who are knowledgeable about edible varieties should harvest and eat wild mushrooms, as there are many lookalikes that can be extremely poisonous.

Now, thanks to the Mushroom Farmacy, a new venture started by August Jones and Ben Kruger, fungi-hungry foodies won’t have to traipse though the woods to get their hands on exotic varieties of delicious and nutritious mushrooms. Jones teamed up with Kruger to begin designing and building a facility where these mushrooms can be cultivated and sold to the public year round. Kruger owns and operates Beaver Creek Woodworks on North 10th Street in Springfield. Jones and Kruger are longtime family friends, and Jones recounts one day he was visiting Kruger in his woodshop. “I looked up and there was this giant mushroom growing on the ceiling. And I thought, we could probably raise mushrooms in here.” The building which housed Beaver Creek Woodworks was formerly Tri-County Foods, a wholesale butcher shop, and the room with the mushroom on the ceiling had once been an enormous walk-in freezer. Jones, who was raising and selling produce at the time, realized the thick insulated walls would be perfect for creating the kind of warm, moist environment necessary for growing mushrooms.

Jones and Kruger spent the next two and a half years researching and building the facilities required to grow specialty mushrooms such as oyster, shiitake, maitake (hen of the woods) and lion’s mane mushrooms. As I toured the facility, I was amazed at the technical detail and precision that goes into cultivating this crop. Much of the equipment was one-of-a-kind, hand-built by the pair, along with their friend, Jeremy Dooley, who helped design the electrical components of the equipment.

It’s a long and somewhat complicated process. Essentially, Jones sterilizes jars filled with rye berries in a huge homemade autoclave, then inoculates them with a Petri dish of mushroom spores (which are kind of like mushroom seeds). Once these have fully colonized, the contents of the jars are mixed with a mixture of moist, shredded straw and packed into long perforated plastic bags. These bags are then transferred into a colonization room, where they hang from bars on the ceiling. Finally, eight weeks after they start out in little Petri dishes, beautiful lobes of mushrooms are growing on the bags, ready to harvest.

Interest in these types of specialty mushrooms have been on the rise lately, not only from foodies who covet their delicious, earthy flavor, but also from health-conscious customers who seek them out for their medicinal benefits. For centuries mushrooms have been used to heal, and are widely used in traditional Chinese medicine. They are rich in antioxidants, polysaccharides and beta-glucans that are thought to build disease resistance and enhance one’s immune system. Some of the first Western medical antibiotics were extracted from mushrooms, and medicines that we still use today, such as penicillin and tetracycline, are derived from fungal metabolites.

Specific mushroom varieties, including the types grown at the Mushroom Farmacy, are known to have powerful health benefits. Lion’s Mane, for example, is highly valued for its support to the brain and nervous system. Maitake, also known as Hen of the Woods, is known for its immune boosting properties.

As delicious as these mushrooms are, Jones says that to really get the most health benefits folks should consume them dried and taken as a tea. The Mushroom Farmacy currently has fresh and dried Blue Phoenix and Pearl Oyster Mushrooms, soon to be followed by cinnamon cap chestnut mushrooms, pink and gold oyster mushrooms, and eventually the coveted lion’s mane, maitake, shiitake and beech mushrooms.

Cooking with specialty mushrooms
These mushrooms can be used much as you would standard button or baby bella mushrooms. Store them in a paper bag in your fridge, not in plastic, and use them within five days. When ready to cook, wash them well under running water and pat dry. If there is a tough stem on the mushroom, remove it. I like to finely chop these tough stems in a food processor, then cook them in a little butter until all the water has evaporated. Frozen in little packets, the chopped mushroom is a wonderful way to extend burgers or meatloaf.

Sauté your prepared mushrooms in butter and olive oil with a little salt and perhaps a bit of garlic or onion until golden brown. They can also be tossed with olive oil and salt before roasting in a hot oven or grilling. I recommend using a grill pan so nothing falls through the grates.

Sautéed or roasted mushrooms are delicious all on their own as well as on bruschetta, steaks, pasta or a rich bowl of risotto. Cooked mushrooms can be frozen for several months.

August Jones grows mushroom spores on organic, locally raised rye berries that he purchases from Tri-County Feed in Pana. I happened to have a jar of those same rye berries in my kitchen. Garrick Veenstra, with Harvest and Blooms Farm, sources that same grain from Tri-County Feed, which he mills into fresh rye flour for sale at his stand at the Old Capitol Farmers Market. I’d recently asked Garrick to set aside a couple pounds of rye berries for me. I love to use them in hearty grain salads and soups, and when I came home from my tour of the Mushroom Farmacy with several pounds of oyster mushrooms I was inspired to come up with this savory recipe. Making the rye risotto is a bit time-consuming, but unlike regular rice risotto, it keeps really well in the fridge for several days, making it a perfect make-ahead meal. This is a stunning stand-alone main course but would also be incredible alongside braised short ribs or roast chicken.

Heat the butter or oil in a heavy-bottomed soup pot or in the bowl of a multi-cooker like InstantPot. When the butter is hot, add the rye berries. Cook until lightly toasted, then add the chopped onion, celery and garlic. Cook for 2-3 minutes until vegetables are softened. Add the wine and cook until liquid is mostly evaporated. Add the salt and whole sprigs of thyme (omit salt if using salted broth). If using an InstantPot, add and 2 ½ cups of the chicken broth, then set the machine to cook for 25 minutes under pressure. If cooking over the stovetop, add 4 cups of broth and bring to a boil before reducing to a simmer. Cover and cook for 1 hour.

While the risotto cooks, prepare the mushrooms. Heat the oven to 450 degrees. Wash and pat dry the mushrooms before tearing or slicing them into uniform-sized pieces. Toss with two tablespoons olive oil and season with salt and pepper before arranging on a baking sheet. Roast 15 to 20 minutes until golden brown and crispy around the edges. Remove from oven and set aside.

After the rye berries have cooked, release the pressure if using an InstantPot, then set to sauté setting to reduce the remaining brothy liquid in the pot. Remove the thyme stems. If cooking over the stove top, remove the lid and increase the heat slightly and stir frequently. When the liquid has almost entirely evaporated add ½ cup broth. Continue to stir and cook until that liquid is almost evaporated, then repeat with another ½ cup broth, continuing until all the broth is used up. Stir in the roasted mushrooms and grated Parmesan, then transfer to a serving dish. Top with chopped parsley and serve with a wedge of lemon. –Ashley Meyer

Wine for the holidays