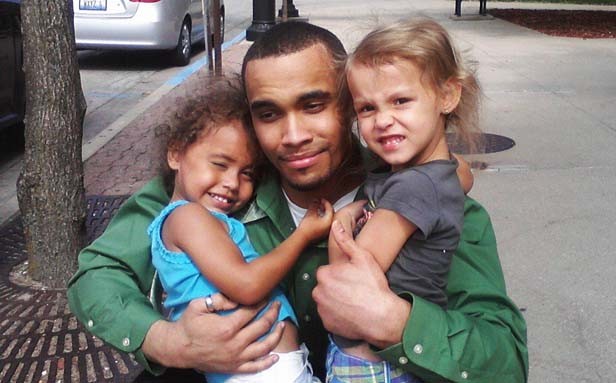 Richard Britts of Springfield told the police again and again that he never harmed his then three-month-old daughter, Saniya.

“Right now, I know all fingers are pointing at me, man, but I love my baby,” Britts told police in a January 2010 interview. “I would never hurt her like this, man.”

A jury last week found Britts not guilty on two counts of aggravated battery to a child, two years after he was arrested on suspicion of shaking his daughter. Britts found Saniya, now two years old, unresponsive and limp in her crib in 2010, and brain scans showed bleeding on Saniya’s brain, prompting charges against Britts.

It’s the latest case calling into question “shaken baby syndrome” – a triad of symptoms that some doctors say can only be caused by violent shaking. Other doctors, however, say existing medical problems can cause the same symptoms, casting doubt on a diagnosis that has landed several people nationwide behind bars.

The case began on Jan. 3, 2010, when Britts heard Saniya let out a “nerve-rattling gasp” in her crib. Britts picked up his young daughter, finding her body limp and unresponsive, with her eyes rolled back in her head. He called his wife, Shantell Britts, and then called 911.

“I didn’t know what to do,” Richard Britts told police in an interview. “I couldn’t stop my hands from shaking.”

Saniya underwent CAT scans at the hospital that showed bleeding around her brain, which led at least one doctor to conclude Saniya had been violently shaken. Being the last person to watch Saniya before she became unresponsive, Richard Britts was arrested and charged with two counts of aggravated battery to a child. Britts told police he didn’t shake the child, and he explained that seizures run in his family, with his mother and brother both taking medication to control them.

At Britts’ trial, jurors heard testimony from doctors with opposing views about what caused Saniya’s medical condition. Dr. Channing Petrak, a pediatrician at OSF St. Francis Medical Center in Peoria, testified that Saniya must have been shaken – and possibly hit – to explain the bleeding on her brain. But Dr. John Plunkett, a retired pathologist from Minnesota who studies cases involving allegations of baby shaking, testified that the child apparently suffered a seizure.

The jury last week acquitted Britt of both counts against him, and he was released from the Sangamon County Jail where he’d spent the past two years. Now, he’s trying to rebuild his life. One of his first acts was seeing his daughter, Saniya, who had no permanent medical damage from her apparent seizure.

“She’s perfect; she’s great,” Britt said in a phone interview. “She’s just peachy. It’s a blessing to be home and still standing. … It’s kind of hard to start over. I lost my job, lost my family. Some people might think I slipped through a gap, but they didn’t see all the evidence I had in my favor.”

Deborah Tuerkheimer, a law professor at DePaul University in Chicago, says she may include Britt’s case in an upcoming book examining shaken baby syndrome in the legal system. Tuerkheimer says the case shows juries are beginning to question shaken baby diagnoses.

“It’s still pretty arbitrary how these cases are coming out,” Tuerkheimer said. “In general, we’re observing a trend toward greater skepticism.”

Lindsay Evans, an assistant public defender in the office of the Sangamon County Public Defender, represented Britts at trial. She contrasts Britts’ case with that of Jennifer Bernal, a Springfield woman convicted in January of murder and sentenced to 40 years in prison for the 2008 death of 18-month-old Anthony Joseph Romanotto. Both Petrak and Plunkett testified in that case, too, Evans said, adding that Britts’ jury questioned the shaken baby theory more intensely.

“I think the tide is turning, and I think it’s turning slowly,” Evans said.

Britts says he’s pleased that his case can offer insight into an area of medicine and law that is still developing.

“If my case opens doors for them to understand that there can always be more than one thing that causes something,” he said, “I don’t mind being the one who informs the world of new knowledge.”