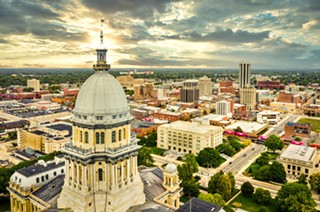 Mid-sized cities in "flyover" country face extreme challenges to survive, let alone thrive. Springfield has a significant number of positive attributes and several promising initiatives, but is far too willing to accept mediocrity.

Leadership of Springfield for the next two to four years is critical to its future. The mayor and City Council will face extraordinary public issues, from providing electricity to homes and businesses to affording basic citizen services. We need to not only have serious community conversations on a variety of topics over the coming months but develop action plans. Here are some issues that the city needs to focus on to make itself a better place to live and work.

Downtown Springfield. The importance of a thriving downtown needs a public discussion by all mayor and alderman candidates. Several recent surveys suggest people across the whole city, and even people in the county, understand that importance. There is not much evidence of commitment by the council. Recent public commentary has been pretty disheartening. The city must embrace an exciting, innovative and imaginative plan for downtown, and then make it happen.

Springfield Sangamon Growth Alliance. The city operates without any serious planning or economic development entity. The mayor serves as a director on the Springfield Sangamon Growth Alliance, and the city provides substantial financial support to the Alliance. Candidates for mayor and candidates for alderman need to engage in public discussion regarding how the city uses the expertise at the Alliance.

Mansion/Y Block. It's time to bring some closure to this eyesore. Serious underground sewer and storm water drainage infrastructure limits over half of the block nearest the Governor's Mansion to green space. The next few months is a really good time for some public dialogue . . . and some closure.

East side. A few years ago, a fairly comprehensive concept for serious upgrading and development of the east side area between 11th and MLK, Cook and South Grand was developed. The concept was a little bold, but actually practical and doable, basically creating a whole new community.

Free federal COVID money. Springfield voters should have a full accounting of how the COVID money is being spent and what it is committed for in the future. Hopefully the $35 million is impacting the community in many positive ways, enabling the city to improve its competitiveness in attracting new people and new businesses.

Budget priorities. As soon as the free COVID money is gone and forgotten, the city corporate fund will again dominate the financial picture. A new council will be forced to make some difficult decisions. The normal budget process gives more and more money to police and fire each year, to the detriment of city services and projects that might actually attract more people and businesses to locate here. The recent Springfield Fire Department Analysis report provides a blueprint for financial and management reform while retaining excellent fire and EMS services. A similar study on the police department needs be initiated.

CWLP. The future of the power plant needs a very public discussion. Not only do the users and ratepayers deserve a detailed report of the current status of the plant, the rather immediate coming changes are certainly of interest to any businesses that might want to locate here.

This upcoming cycle of elections for mayor and aldermen is the perfect time to ask questions and to explore possibilities. Managing the business of the city seems dysfunctional. It's not a stretch to suggest that the city has little to no vision, no planning apparatus to pursue a vision if there were one, and no structural ability to facilitate a plan, if a plan existed. This is not the kind of vibrant, growing community that attracts job seekers and job creators from around the world.

None of the above items, as important as they are, are actually game changers. Most will not be seriously discussed, and the city's shortcomings will still exist regardless of election outcomes. The only game changer would be a structural change to the way the city of Springfield does business. There is a reason Champaign, Normal, Decatur, Bloomington, Peoria and many others have professional city management. Under such a change in Springfield, nothing would affect the aldermen and their wards. The mayor would be elected citywide and remain the face of the community, preside at meetings, assign agenda items and facilitate communications. A city manager would have broad executive authority to carry out policy and oversee day-to-day operations. Petitions for a referendum to change to a council-manager form of local government could be filed in August 2024 for a vote in November 2024.

Springfield could indeed do a lot better!

Sixteen years ago, Bob Gray was co-founder of the Citizens Club of Springfield, and was president of the club until he stepped down from that post in July. During those years he championed civic discussion on a wide range of public policy issues, while keeping his own opinions mostly to himself. He has resided in the Springfield area since 1966.

The last study of Lake 2