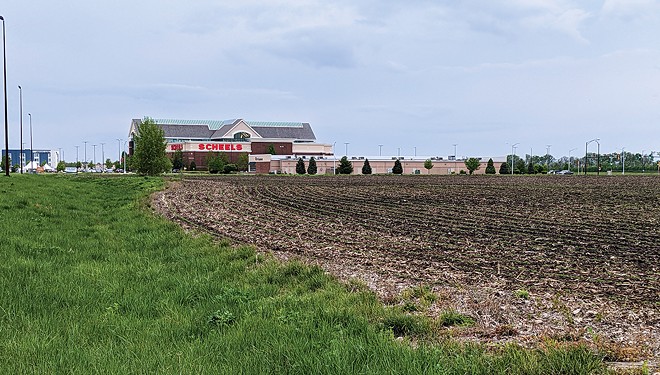 Photo By Bruce Rushton
The city of Springfield is considering a tax hike to build a youth sports complex on vacant land near Scheels.

The Springfield City Council is contemplating a tax hike to help pay for youth athletic fields near the MacArthur Boulevard-Interstate 72 interchange.

A proposed $36.25 million subsidy, including $30.5 million for construction and the balance for upkeep over 23 years, would be, so far as anyone can remember, the largest city grant for a private project in Springfield history. The city would raise hotel-motel taxes by 1 percent, rebate the city's portion of property taxes to the developer of the 90-acre site and also rebate 70 percent of any increase in sales tax proceeds realized by area businesses, including Scheels, after the project is complete. The city also would provide the developer with 1 percent of current hotel-motel tax collections.

In addition to eight fields that could be used for soccer, softball and baseball, the $61 million project would include a parking area. Project backers say that it would draw young athletes and their families from hundreds of miles away who would stay in local hotels and eat here and otherwise pump money into Springfield's economy as kids compete in organized sports tournaments. The idea has won approval from Downtown Springfield Inc., the Greater Springfield Area Chamber of Commerce, the Springfield Sangamon Growth Alliance and hotel operators who, despite an increase in hotel-motel taxes, might benefit from room rentals.

It would be a good deal for taxpayers, according to city tourism director Scott Dahl, who told the city council last week that 250,000 people a year would come to Springfield and spend as much as $30 million. "This is brand-new business," Dahl said. "Youth sports aren't going anywhere."

"If we get this done, other cities are going to be envious of this deal," said Ryan McCrady, president and chief executive officer of Springfield Sangamon Growth Alliance, a group funded by public and private money.

Others aren't so sure.

Ward 7 Ald. Joe McMenamin points out that a quarter of the city's hotel-motel taxes for 23 years would go toward the project, and he says that's too much. "I think the sports complex is a great idea, but it should be a private enterprise initiative, not a public, city initiative," McMenamin said.

A sports complex in the area isn't a new idea. In 1997, work began on nearby land for an 86-acre complex dubbed Xanadu, but the project fizzled. In 2014, another attempt to build a sports complex at the Xanadu site also failed. Backers of the current proposal say that a privately financed sports complex won't pencil out, and so public money is needed.

Under the tentative deal with the city, taxpayers would share financial burdens equally with the developer, says Steve Luker, a principal with Legacy Park Sports, the developer. "It's a 50-50 proposition – that's the most it would be," he said.

Scheels, which opened 10 years ago on land near the proposed sports complex, is in the mix. A planned outlet mall on the property now proposed for a sports complex never materialized, and so predicted retail synergies to benefit the sporting goods store haven't happened. Backers say that the project would entice Scheels to remain in Springfield after the current lease expires in 2032.

No private financing is in place. In addition to no detailed financial information from developers, Zerkle said that there are no construction plans or schedules, nor plans for longer operations and maintenance. "This is a very unusual set of circumstances because we don't have complete information," Zerkle told the council.

"I just want to remind everyone: There are so many safeguards in this agreement," DiCenso said last week. "We still have questions, we still have a long way to go. ... We have taken on projects with just as much information. We like to act like this is an unknown thing. But we've voted on giving millions of dollars to other projects that haven't panned out. Let's keep an open mind."

Ward 10 Ald. Ralph Hanauer during the council session questioned costs and asked how the project pencils, given winter months when there would be no soccer or baseball or softball games. In an interview, Hanauer said that he's willing to go 50-50 with the developer, but still has concerns. He said he questions how much the city should pay after the project is built.

"We're doing more for these guys than we've done for anyone else – any developer, ever," Hanauer said. "Now, they want us to go halves on the upkeep and maintenance. That should be their thing. Next thing you know, they're going to want the city to run it."