Springfield's Muni Opera is back after two silent summers, and the first show is a celebratory musical, SpongeBob Squarepants, which opened last week and runs thru June 5. This 2017 musical is based on the popular children's animated series that has been running since 1999.

I asked my nine-year-old great-nephew, Archer Adkins, about the TV show, since I'd not seen it. He told me he loved it. When I asked him what it was he loved about it, he thought for a moment and said, "because it was fun, kind of crazy and also very chaotic."

Chaotic? I thought that was interesting to hear from a nine-year-old. The story takes place on an ocean floor where a lot of flotsam has sunk over time. The community there is called Bikini Bottom. The main plot is about an earthquake that occurs and the assumed end to Bikini Bottom when the local volcano may erupt in 36 hours.

I realized there is a sense of chaos actually written into the show when I saw a run-thru last week, which, unfortunately, was a night of rain. The show is so big and has such a large cast and scenic elements, they were unable to do the whole show that night. What I did see was a wonderful parade of surrealism involving color, characters, costumes, cacophonous moments of blasts of wacky sound (kudos to the elaborate sound designed by Dylan Leach) and a strong storyline about everyone pitching in to help.

Director Craig Williams II says one of the show's strengths is "its flexibility with everything from casting, sets, etc., and we were encouraged to make it our own in every way." Williams has designed a pop-art set that is a character in itself.

The musical has songs written by a lot of people. Instead of one or two composers, the songwriters include Yolanda Adams, Sara Bareilles, David Bowie, Lil' C, Jonathan Coulton, Cyndi Lauper, John Legend, Tom Kenny, Lady Antebellum and others.

How does an actor play a sponge? Devin Leming, who played the title role in the last Muni incarnation of Peter Pan, plays the role of SpongeBob here. Leming is a Midsummer Night's Dream Puck-like actor and brings a lot of charm and fun to the role. He has great comic timing, a winning way with an audience, and a perfect style of performing this role.

Leming has strong support from an ensemble of great, versatile, highly comedic performers. Greg Donathan as Squidward wears a wondrously designed costume that stops the show. Wes Bridges is funny and touching as Patrick. Chrissy Mauck as Sandy Cheeks the geologist is a real find, a major talent. Courtney Wick as the Mayor exudes comic character outlandishness. Jim Leach is a hoot as Eugene Crabs. Mark Wheeler and Zoey Zara show how villains can be lovable.

"It's about how listening and understanding one another better, the community gets stronger and can collectively overcome anything," Williams says.

Good advice these days, and for the opening once again of a great outdoor theater in Illinois. Showtime is 8:30 p.m.

For tickets go to www.themuni.org.

Phil Funkenbusch is a theater-maker from Havana, Illinois where he is currently producing some new, grassroots theater projects. He can be reached at funkenbuschp@gmail.com. 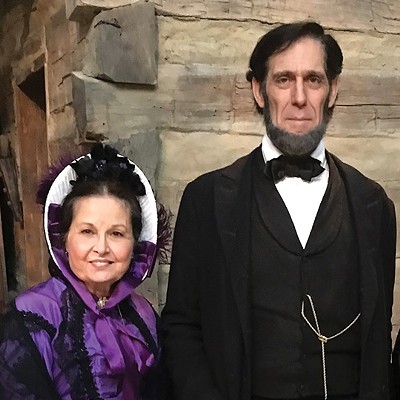