U of I begins COVID-19 saliva testing 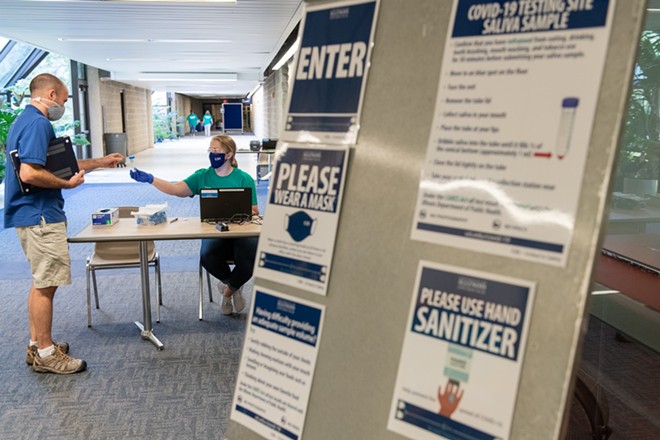 facebook.com/uis.edu
Testing at UIS is underway. The first day of classes is Aug. 24.

University of Illinois Springfield saliva testing for the new coronavirus is up and running as of Aug. 11. Researchers at the University of Illinois Urbana-Champaign developed the so-called SHIELD test. The tests are being used at all three U of I campuses. The university system said it wants to supply the tests throughout the state and nation.

Starting Aug. 17, anyone spending time on the UIS campus as a student, faculty or staff member must be tested once per week. "We're going to do surveillance testing, not symptomatic testing," said Karen Whitney, interim UIS chancellor, during a webinar last month. The conversation was about education and COVID-19. Whitney told attendees of the coming school year, "It's gonna be a roller coaster."

Interruptions should be expected, said Whitney. "We will pause, I have no doubt. We've got 4,000 students, 700 employees. Right now we probably won't have more than 10% of anybody on campus at any one time." Fewer people on campus, increased cleaning and required mask-wearing are additional mitigation measures in place, along with the mandated weekly saliva testing. For students who test positive? "We will have quarantining spaces on our campus so that our students won't have to upend their life," said Whitney.

On Aug. 10, the University of Illinois System announced a new "university-related organization" that will make the technology available nationally. The test has rapid results and costs less than nasal swabs, according to a news release. Results are ready within six hours. According to the release, "The quick turnaround time for test results is a key in curbing the virus, allowing isolation early enough to limit spread of the infection as well as narrowing down past exposure to allow more effective contact tracing. It also identifies and isolates people with asymptomatic cases who would otherwise spread the virus unknowingly."

More information on SHIELD testing at UIS can be found at: tinyurl.com/y2cjurvn.