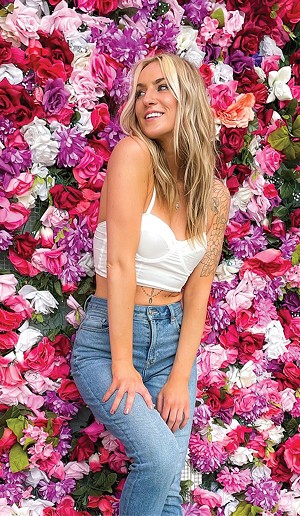 Known for her spectacular singing voice that landed her a spot on the national TV show, "The Voice," Gracia Harrison is now firmly entrenched into the world of country-pop songwriting as well. After garnering a great deal of attention from "The Voice" appearance, (she was the first, and only person to date who yodeled her way onto the show), the central Illinois native worked with some Nashville cats to produce singles and videos and went the usual route of picking songs written by Music City pros.

But now her most recent cut, "hey," released in May 2021, came from her pen and mind only, and demonstrates she picked up a thing or two from hanging around the big-time songsters. As Harrison approaches nearly 10,000 followers on her Facebook musician page and with over 2,000 likes on her new "hey" single video on YouTube, she is beginning the transition to a one-name artist, to be known simply as Gracia (it's pronounced "Graysha,'' as she explains on her LifeofGracia Twitter feed).

There's some movement with the single to back up the songwriting prowess as she's now played on the ACM New Music Friday Night playlist, got a good mention on the music industry website The Country Note and has been added to many well-represented Spotify playlists. She was also a finalist in our BoS female vocalist category this year.

Upcoming plans for Gracia include releasing more songs in the next few months, booking a tour of the Midwest to support the rising music and dropping a CD of new tunes in early 2022 to continue the progression from heartfelt country music singing yodeler to full-time, country pop songstress.