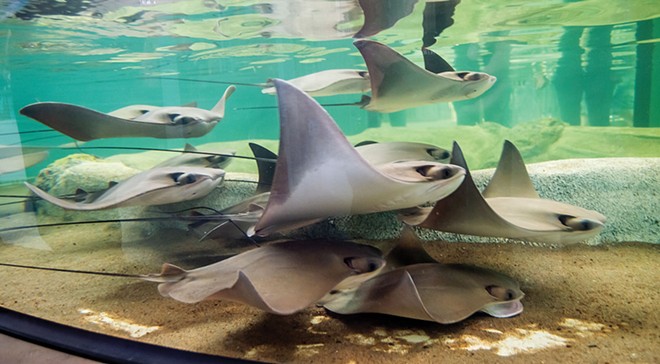 PHOTOS COURTESY OF THE ST. LOUIS AQUARIUM
A tank of stingrays is a popular attraction at the St. Louis Aquarium at Union Station. The rays’ stingers have been removed so visitors can touch them.

Plunging my hand into a shallow tank of doctor fish and having dozens swarm it tickled my fingers and my psyche. I giggled as they nibbled away any dead skin, the tank's attendant assuring me it was a perfectly safe pseudo-manicure.

Such a tactile experience is an integral part of enjoying the St. Louis Aquarium at Union Station, home to 13,000 animals. While the aquarium is not as large as Shedd in Chicago or the New England Aquarium in Boston, the St. Louis one provides an intimate experience with water creatures.

"It's very high-tech and high touch," says Nancy Milton, aquarium spokesperson. "We want people to leave with their hands wet."

In addition to experiencing doctor fish (red garra), visitors can stroke a (stinger-trimmed) ray, hold a stick to see archer fish spit to dislodge food and touch anemones, sea stars and sea urchins. At a water table mimicking a stream, "little kids love to splash and play but still are learning," Milton points out.

Of course, you don't really leave with your hands wet as the aquarium provides hand-washing stations after each encounter. Precautions against COVID-19 include an enforced mask requirement and timed entry with 50% capacity.

COVID-19 stalled the aquarium's takeoff after it opened on Christmas Day 2019. It remained open for three months but then had to shut its doors until June 2020, when it limited occupancy to 25%. Its popularity is now increasing, so visitors need to reserve tickets, especially for weekends.

Built in the area of a former mall at St. Louis' iconic Union Station, the two-story aquarium filled a niche missing in the city, Milton says. A 3-D virtual reality train ride pays homage to the station while introducing visitors to the city and the aquarium. 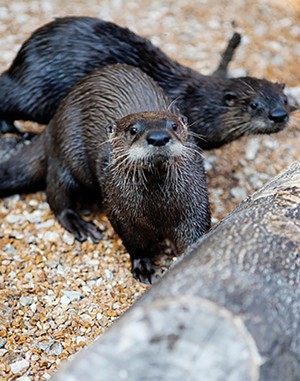 Sawyer, one of three river otters at the St. Louis Aquarium, spends his days playing and swimming as a visitor favorite.

The virtual show includes views from inside the Mississippi and Missouri rivers as a precursor to a gallery with a tank full of catfish, sturgeon and gar. "All we see on the top of the rivers is brown water," Milton says, and this display allows visitors to learn what is happening beneath the surface.

They also can view that at Shark Canyon, which houses the largest tank with 250,000 gallons, 60 sharks and rays and dive shows several times a day. Fish swim in front of and above visitors, giving them the feeling of being under water.

Viewers don't have to worry about witnessing a shark attack smaller fish because all of the animals are well fed, Milton says. "They eat a lot better than we do."

The shark tank is one of the most popular features, as is the river otters' display, which includes viewing areas under water and of their surface playground. Small children delight in interacting with an animated otter manipulated by an actor behind the screen who can see the audience and respond appropriately.

Children also are sure to be enthralled by "Eugene," a puffer fish who loves hanging out by a window in his tank to greet visitors.

Other galleries highlight fresh water fish from South American rivers, including red piranha, and The Deep, which features bioluminescence. The Deep gallery also has leggy sea dragons, creatures that look other worldly; corals under black light to show what they would look like in the deep ocean; and jellyfish.

A particularly fun area is Lord Stanley's home, where visitors can see a rare blue lobster and take a selfie by a hockey goal. Milton explains that he was caught in New England and brought to a lobster and clam bar. The owner decided the crustacean belonged in St. Louis, after the Blues hockey team beat the Boston Bruins for the Stanley Cup championship in 2019. A naming contest ended with Lord Stanley as the winner.

A children's play area with changing themes, talks by staff members and a conservation and education center run by the aquarium's foundation all add to the day's experience.

Union Station's owner, St Louis-based Lodging Hospitality Management, operates other attractions, including a ropes/zipline course on the second floor amid the train shed pillars. Also inside are Mirror Maze, a carnival-like fun house, and two of the three restaurants begun by LHM. 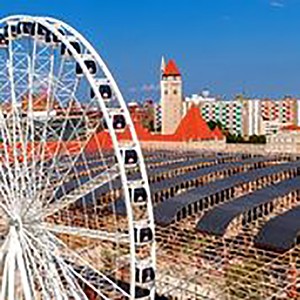 The Wheel, a 200-foot-tall Ferris wheel, takes riders on 15-minute spins in climate-controlled gondolas at the St. Louis Union Station.

Outside in the old train yard are a mini-golf course, a carousel and a pond with koi to feed. An evening light show emanates from the water and an old-fashioned soda fountain/candy store offers "freak" milkshakes.

Dominating the skyline is a 200-foot-tall Ferris wheel with 42 climate-controlled compartments for six people each. The wheel is open 365 days a year, costs $15 and takes 15 minutes for a gentle ride of three revolutions. Milton says riders can see 20 miles on a clear day.

The renovated Union Station hotel offers 560 rooms, some of which overlook the aquarium, and a grand lobby reminds visitors of the 1894 station's significance in city history.

The aquarium is open 9 a.m. to 5 p.m. every day except Fridays and Saturdays, when it closes at 8 p.m. Milton says the least busy times are early in the day Monday through Thursday.

Admission is $25 for adults, $20 for seniors and $18 for children 3-12. Children under 3 are free. Milton recommends buying an annual pass, which can pay for itself with two visits. For those planning to ride the Ferris wheel or try the other attractions, a combo ticket also can save money. The ropes course has a separate fee for timed admission.

Parking in two nearby lots is $3 an hour, but the Explore St. Louis kiosk near the entry doors offers a $5 all-day parking voucher.

For more information and to reserve tickets, go to www.stlouisaquarium.com.

Mary Bohlen is a Springfield travel writer who likes exploring and being tickled by new discoveries.