State commission will recommend funding and other changes 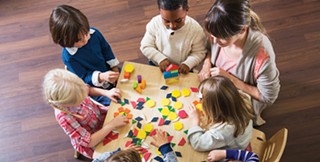 Is a new state agency on the horizon? It's at least a possibility. The Illinois Commission on Equitable Early Childhood Education and Care Funding is set to release its recommendations in March. The commission, created by Gov. JB Pritzker in December 2019, is charged with establishing funding plans that would "provide equitable access to high-quality early childhood education and care services for all children birth to age five."

One theme has been how best to blend funding streams and child care and early childhood education programs administered by the state.

"Our system of early childhood education and care in Illinois has never prioritized equity," said state Sen. Andy Manar, who co-chairs the commission. The Democrat from Bunker Hill led an overhaul of the state's funding formula for K-12 education, which resulted in the Evidence-Based Funding Formula, signed into law in 2017. It's meant to send more state money to under-resourced school districts, all of which largely rely on property taxes.

Is preschool in need of similar treatment? "Yes. Now, we have to recognize up-front that the systems are very, very different. But the idea that money has to be prioritized in communities that need it the most is a central theme," Manar said.

In addition to a needed change in the way preschool is funded, making the early childhood system less complex overall has been a "central theme" of the commission, said Manar. An anticipated recommendation of the commission will be to combine current programs administered by the state "under one umbrella," he said. The recommendations will not be binding, and whether that umbrella is an existing agency or a new one, and whether it comes to pass at all, remains to be seen.

What is known is that quality preschool education leads to better lifelong learning outcomes, and even better health. But rural and impoverished areas often lack affordable, licensed options.

Robin Steans is president of Advance Illinois, a nonpartisan state education advocacy organization. She's a member of the state's early childhood commission, which met Dec. 10. Steans echoed that while equitable funding is a top priority, the subsequent question is how it can best be distributed. She presented the idea of a centralizing efforts into a single early childhood agency.

"The system is horribly complex today," said Manar. It's a "puzzle" of for-profit and nonprofit providers and "a patchwork of programs that have, in many respects, different goals and different outcomes." From the commission, he said, "There will be some recommendations that can be implemented rather quickly by the administration without a change in state law. And then there will be heftier recommendations that undoubtedly will spark vigorous debate in front of the legislature – that will require legislative action."

Meanwhile, "It is going to be very difficult to invest major sums" of new money in the coming budget year, said Manar. Budget cuts loom as a result of the pandemic – with additional cuts due to the failure of the so-called Fair Tax amendment Pritzker spearheaded.