How do pythons see the world? 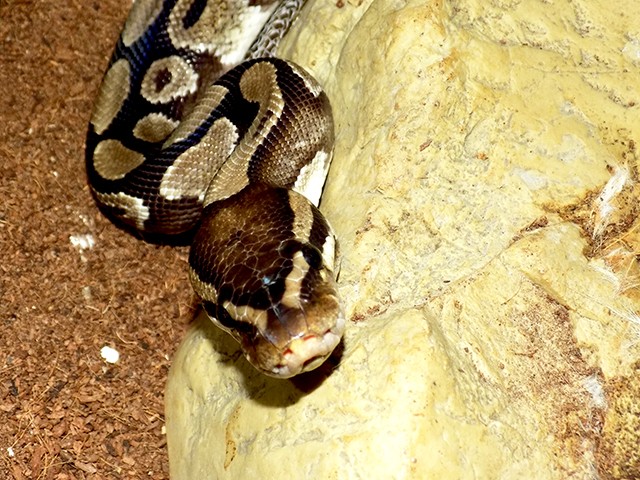 Photo by Bruce Rushton.
Monty the picky python in search of prey.

I write, too much perhaps, about pets.

First, there was Peanut.Then came Champ The Wonder Pug. Lately, I have devoted thought to Monty, who is getting on in years, if not decades.

I’d wanted a snake since I was 12, but only after moving to Springfield more than a dozen years ago did I feel the time was right. Reptiles, after all, require commitment. The classified ad in the State Journal-Register – this was a long time ago – included a price that was waived when I arrived at the home of a man whose 20-something son recently had moved back in, bringing an assortment of serpents with him, including Kenyan sand boas, which have both teeth and a reputation for being surly.

“Truthfully, you may have them all for free,” dad told me.

I picked what looked the sexiest snake in the herd, fat in the body with a thin neck, or what passes for a neck, and a no-nonsense face, which is ubiquitous in Snake World. The common name is ball python, for the creature’s tendency to knot itself into a ball when scared, but royal python, also, is acceptable, and the term preferred by me and maybe Monty, who has no ears.

Pro tip: Snakes can be finicky, so watch it eat before taking it home. Otherwise, you might find yourself on Google, trying to figure whether to force feed and how best to accomplish same. Disposition, also, is important. You want a critter that doesn’t mind being handled and displayed to trick-or-treaters who will either think it is the coolest thing ever or scream and run blindly from your porch and into the street, which is why I’ve stopped doing that.

Snakes are not for everyone and, truthfully, I would not get another. To a point, they snuggle, but they also slither, so if you fall asleep snuggling your snake, don’t be surprised to wake up snake-less. Rest assured, it will be somewhere. Properly confined, royal pythons spend most of their time hiding under fake rocks, and so they are not much to look at. Also, there is the cost of electricity, not insignificant, to mimic warmth of native lands, plus food, which costs more than one might imagine, considering snakes eat pests. A three-rat-pack from the Gourmet Rodent company costs $15 at the pet store, with packaging that includes the mother of all warning labels: Not For Human Consumption, which shows that both rats and overly cautious lawyers have something in common.

Flash frozen rats, once thawed, are, I guess, tasty, but snakes, as I say, can be finicky. Monty tends to ignore black or grey rats while devouring white ones, and since Gourmet Rodent packages are opaque and the contents expensive, I buy in bulk, mail order, and store clear freezer bags full of rats next to the ice cream so I can feed white unless I know he’s really hungry.

Pythons, likely, have excellent vision, according to scientists who’ve studied snake eyes and concluded that serpents can see better than most of us suspect. Which makes me wonder: Is my snake a racist? Compounding matters, if Monty prefers white over dark, against which color is he prejudiced?

From a human perspective, it might seem that Monty is biased against dark rats, since he prefers eating white ones, but I can understand how a rat might see things differently. An acquaintance wiser than myself, years ago, pondered what I hadn’t considered.

“Are the rats frozen?” he asked.

That’s an opportunity-cost question that might matter most. Like humans, rodents do not enjoy being eaten, and so they can put up quite a fight. Some snake owners, nonetheless, feed live prey, perhaps because they think their pets prefer fresh, or maybe they enjoy making python-versus-rat videos that proliferate on the internet, where plenty of pictures of scarred snakes bested by rats also are posted.

Does Monty shy from dark rats because, somewhere deep inside, he fears them, even though dead, more than white ones, and, if so, at what point does hunger outweigh fear? Is it a case of familiarity? White rats, easily, outnumber dark ones by a ratio of six-to-one in any given pouch of frozen rodents, and so Monty, maybe, likes to stick with what he knows best. Who can say for sure? The animal kingdom is mysterious, maybe as much as the world we live in.