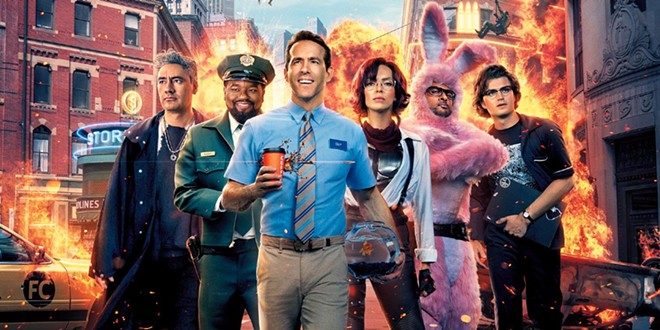 Night House a murky mystery
Like settling for a bowl of cereal of dinner, David Bruckner's The Night House left me wanting more. Though effectively atmospheric and featuring a compelling performance from Rebecca Hall, the film falls short where fleshing out its plot is concerned. The actress is Beth, a woman who's suddenly widowed when her architect husband abruptly kills himself. Reeling and searching for answers, she begins to go through his personal belongings, finding plans for a house that looks just like theirs, only inverted, as well as pictures of a woman who looks very much like herself.

The seeds are planted for an effective thriller, but Bruckner fails to create a sense of urgency, while the script by Ben Collins and Luke Piotrowski is far too vague in explaining the supernatural goings-on. A near-death experience Beth had years prior is mentioned, but the connection between that event and the haunting she's experiencing is tenuous. I don't mind a bit of ambiguity where thrillers of this sort are concerned, but House fails to meet the viewer even halfway, providing only hints of what might be happening, rather than clues from which to draw conclusions. In theaters.

Bland Protégé fails to inspire
Martin Campbell's The Protégé is serviceable entertainment, a disposable film that manages to hit all the expected beats of a big-budget action flick, but with little enthusiasm or innovation. Maggie Q takes on the title role, an assassin named Anna who was rescued as a child in Vietnam by Moody (Samuel L. Jackson), a mercenary who takes her under his wing and, over the years, teaches her the tools of his trade. However, after her mentor is slain, she finds herself on the run, seeking answers as to who killed him and why.

Our heroine eventually returns to Vietnam, leaving a trail of corpses in her wake. The most interesting part of the film is Anna's relationship with Rembrandt (Michael Keaton), a rival assassin working for the man she seeks. The cat-and-mouse game they engage in threatens to give the movie the spark it needs, goosing it along with a hand-to-hand fight scene that's more foreplay than combat. However, moments of inspiration are hard to find here, the action scenes executed in a perfunctory, by-the-numbers manner. In the end, The Protégé proves merely passable and instantly forgettable. In theaters.

Smart Guy unexpectedly rewarding
Much smarter than expected, Shawn Levy's Free Guy is far more than a broadside aimed at the video game culture as it tackles the themes of free will and predestination while fostering a sense of technological paranoia that couldn't be more timely. Ryan Reynolds is Guy, a fella with a rote existence as a bank teller in the burg known as Free City. What he doesn't realize is that he's a background character in a video game, programed to do the same thing every day. However, that changes when he sees Molotov Millie (Jodie Comer), the avatar of a player who happens to be seeking something within the game. Instantly smitten, Guy begins to deviate from his programming in order to pursue her.

While the film contains the requisite amount of mayhem required in a summer action movie, the subtext dealing with creating a life based on heroic choices rather than cowardly ones has an unexpected poignancy. To be sure, the film runs a bit long, hampered by the requisite prolonged third-act fight, but Reynolds' sense of innocence is put to good use here, as Guy ultimately proves to be the Everyman we all aspire to be, whether we're programmed to or not. In theaters.