Running led to a life of fitness 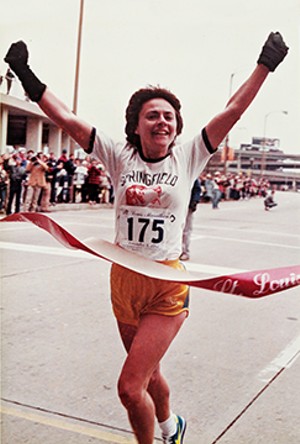 Becky Baum winning the women's division of the St Louis Marathon on Dec. 4, 1983

Many of the women who have participated in the Women’s Distance Festival over the years continue to run and live a life of exercise and fitness. Each has a different story as to how she got involved in running and stuck with it, but they all cite the lasting friendships they have forged and the benefits of running and staying active as they age.

Debbie Huffman codirected the first Women’s Distance Festival with George Anne Daly, and also ran the race, crossing the finish line with Genny Kaufmann. Huffman started running in 1972. Fresh out of college with her degree in education, she was offered a job teaching English at a junior high in Ridge Farm, Illinois, south of Danville. Because Title IX had just become law and schools all over the country were scrambling to find coaches for girls sports, she was asked if she would be willing to coach girls track. It didn’t matter that she wasn’t a runner and knew nothing about coaching track. She said yes and started running the next week. Huffman went on to a long career in education and was also a high school track coach for many years. Huffman says Title IX was the most important legislation passed in her lifetime and has been monumental for women.

When Huffman moved to Springfield in 1977, she ran in Washington Park. George Anne Daly invited Huffman to run with her group. This led to almost daily runs with this group of friends for 35 years. After years of running, she and her friends are now walking together at least three days a week. Huffman has also been going to Capital City CrossFit for the past couple of years. “It’s great to have a coach and learn new fitness techniques and strength-building,” says Huffman. She mixes that with riding a stationary bike in her basement and using a weight bench, daily yoga stretches and hiking at Lincoln Memorial Garden.

Huffman recalls running in Washington Park with Holly Robinson in 1982 when they were both pregnant.  A guy in a car who was smoking a cigarette stopped, rolled down his window and shouted, “You are killing your babies.” Huffman ran two marathons and ran through both of her pregnancies.  She recently discovered that Lisa Jostes Wycoff, her son and daughter’s track and cross country coach at Rochester High School, competed at the age of 14 in the WDF that Huffman directed. Wycoff went on to receive the Genny Kaufmann award.

George Anne Daly says “decade shock” influenced her running journey. Approaching 30, she joined a YMCA in Philadelphia and ran over her lunch hour. Nearing 40, she ran her first marathon and qualified for Boston. Approaching 50, she participated in a sprint triathlon.

When Daly and her husband moved to Springfield in 1974, she joined the YMCA and ran on the indoor track as part of an exercise class. She started working for the state in 1975 and through work and the Y was introduced to a group of Washington Park runners. That began a lifetime of friendships. She and Holly Robinson sometimes ran outdoors at noon and needed a place near their offices to change and shower. 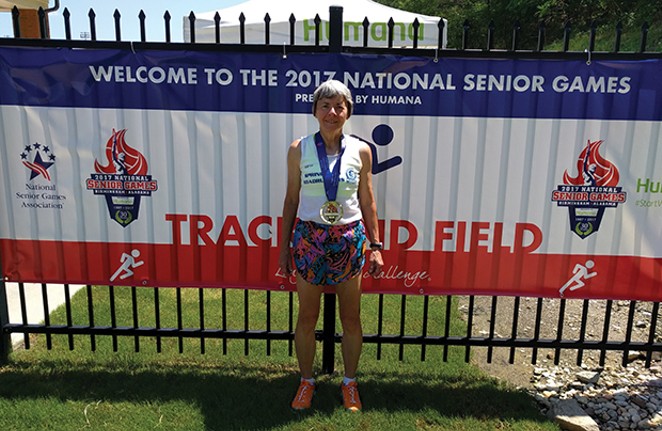 Photos by Becky Baum
Becky Baum with one of three gold medals earned at the 2017 National Senior Games in Birmingham, Alabama.

They soon discovered there were unequal facilities for women. At the time, there was only one locker room at the Y for all females and three for males. They took their concern to the Y board and ultimately a second locker room for women with additional amenities was added. With the help of Louie Giordano, director of the Illinois Department of Personnel, one of the locker rooms at the Armory was made available to women.

“It was a heady, addictive time,” says Daly. “We thought of running as a good addiction. I remember when training for a marathon getting up at 3:30 a.m. to run in the dark, with my dog, 15 miles before going to work.” She ran her last marathon in 1984 and stopped running completely after two knee replacements.

She and her running buddies expanded into other fitness activities, and they worked out at the gym, biked, aqua-jogged and started walking. “I never looked at these workouts as my fitness routine,” she says. “They were my social activities. All the talking during the long-distance runs had led, for me, to lifetime bonds of friendship, caring and support.” At 78, Daly is still going to the gym, walking her three labs and trying to get in five miles daily. Daly, Huffman and Pfeiffer, along with Daly’s dogs, are frequently out walking five miles on the Rochester trail. 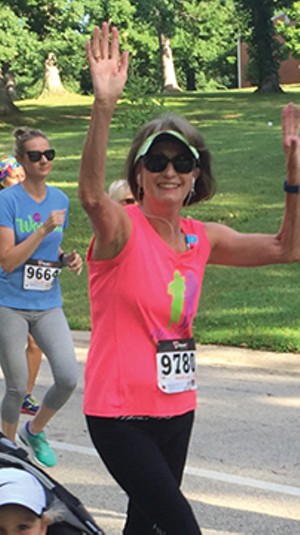 Carmen Chapman Pfeiffer was an avid tennis player when she was a stay-at-home mom. After going back to work, she didn’t have time for tennis and discovered that running in the morning was the most efficient way to get in a workout and juggle work and children. Pfeiffer ran with Huffman and Daly. She competed in the first Women’s Distance Festival, where she placed sixth and Daly placed seventh. Pfeiffer says she was addicted to running for over 30 years. At the peak, she was running 60-plus miles/week. She ran several marathons, including the Boston Marathon to celebrate turning 50.

“Running and working out with my women and men friends of over 40 years has been a blessing and a lot cheaper than seeking professional mental help,” says Pfeiffer. She left running gradually – not from injuries or boredom – but needing to do something else, especially involving stretching and working more parts of the body. Yoga seemed interesting and inviting. She became not only a yogi, but a trained teacher in the 4,000-year tradition of Hatha Yoga. In addition to practicing and teaching yoga, she alternates walking with stationary cycling and the elliptical. “Running was a continuation of a life dedicated to fitness from tennis and racquetball. Yoga is a lifelong journey supported with walking, workouts, biking and hiking,” says Pfeiffer. “My father was a great role model for working out – he rode his bike to work, ran and jogged or walked all his life. Both of my children and their families live in mountains where they ski, bike, walk and hike. It’s a great incentive to stay fit by keeping up with granddaughters.”

Elizabeth Simpson was 42 when she ran the first Women’s Distance Festival. She recalls taking a class at Lincoln Land Community College in the late 1970s, joining a women’s discussion group and reading A Room of One’s Own by Virginia Woolf. “I kept searching for MY Room and finally found running was MY Room,” says Simpson. She ran the five miles home from work every day and enjoyed running in Washington Park during all seasons. “The solitude in running was so wonderful,” says Simpson. “It gave me the empowerment to race.” After her husband died, she hired a coach, continued running, joined Abe’s Army and ran her first 10K. She says that women came to her rescue with the camaraderie of running. At the age of 70 after hip surgery, Simpson joined a race-walking group. She competed in a half marathon in Champaign at the age of 76, did her last Abe’s Amble 10K at the age of 79 where she was the oldest female, and she is still out there at the age of 81 doing two miles.

Becky Baum has been running for more than 50 years. She was a volunteer for the first Women’s Distance Festival and finished first in the second WDF in 1981. Her running journey began in college. While at Ball State University, she started reading about the new “jogging” trend. A cinder track was visible from her dorm room window. She decided to run around it a few times and then started running in the mornings on the streets. She never timed herself and ran in tennis shoes. She moved to Springfield in 1971 and ran on her own. In 1977 she joined the Sunday fun runs in Washington Park, organized by the Springfield Road Runners Club. That’s where she learned others thought she was fast. She was encouraged to run her first competitive race – a four-miler in Pana on Labor Day, 1977. She won the women’s division with a time of 25:07.

In June 1978 Baum was the overall woman winner of the Marathon (Oil Company) Marathon in Terre Haute, Indiana, with a time of 3:09:22. She came in first overall in the women’s division of the St. Louis Marathon in 1983 and came in second overall female in the 1981 Skylon International Marathon that ended near Niagara Falls, with a time of 2:50:08. She ran the Boston Marathon five times and placed fourth in the women’s overall masters division (over 40) in 1988. A year later she was invited to participate as an elite runner and was at the starting line along with Joan Benoit. She’s competed in 18 marathons and many other shorter races. When Baum turned 70 she competed in the National Senior Games in Birmingham, Alabama, where she won several events and set a new record for her age group in the 1,500-meter run. She is now 72, but that doesn’t get in her way. She runs “to stave off old age.” She has read a lot about vigorous exercise being good for both body and mind, and that helps keep her motivated to continue lacing up the running shoes and hitting the roads. 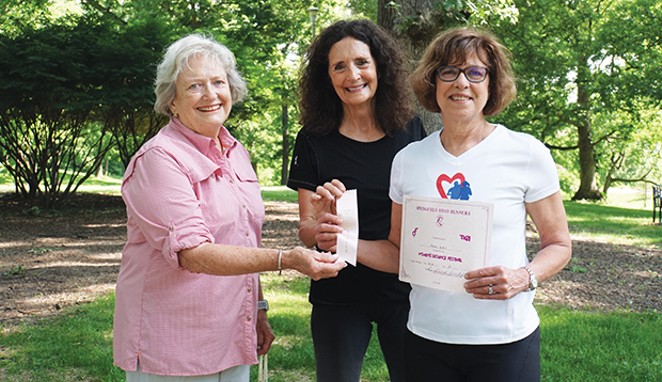 Photo by Lee Milner
George Anne Daly, left, and Debbie Huffman, center, were codirectors of the first Women’s Distance Festival. They’re with Karen Witter, displaying her finisher’s ribbon and certificate from the July 1980 race, signed by Daly and Huffm

Marilyn Kushak started running later in life. After college her priorities were family and career, and she took some aerobics classes. She and her husband, Tom, owned WNNS radio station, which sponsored the Women’s Distance Festival after the first year. Because her radio company was a sponsor, she would participate casually in the event almost every year. Once she retired from day-to-day management at Mid-West Family Broadcasting at the age of 57, she started training and running and engaging in strength and endurance classes. She found the community of runners “wonderfully supportive.”

“In my late 50s and through my 60s, I was energized by their spirit and competitive nature, not only in Road Runner’s races, but the weekly speed group training,” says Kushak. “Abe’s Army was great training and introduced me to Abe’s Amble 10K.” She competed in 5K and 10K races until she turned 70, often winning her age group. She vowed to set the record for the Sizzling Mile for her 70s age group. “With that goal accomplished, I tossed my ego aside, and set a new goal to stay injury-free, yet still stay in the game,” says Kushak. She says it was a game changer when Bill Stokes introduced her to Interval Run-Walk-Run. She set a new goal of finishing her first half-marathon with the support of the Road Runners Half Wits group and has now completed five. She says interval running allows muscles to recover, increases enjoyment, reduces fatigue, inspires further distances and lessens the risk of injury. At the age of 75, she encourages others to stay active and enjoy the experience and health benefits of interval running/walking. “It’s never too late,” says Kushak.

Twenty-three years after she participated in the first Women’s Distance Festival, Karen Ackerman Witter ran the Chicago Marathon, inspired by a group of local women runners. She has long admired the women featured in this article.