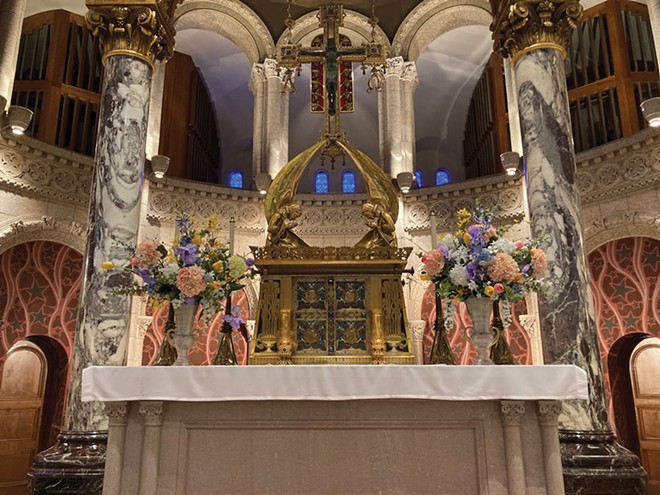 PHOTO BY SCOTT REEDER
The gold-covered tabernacle above was designed in Belgium after images of the Ark of the Covenant. St. Francis of Assisi Church is at the heart of the center.

An Italian saint who has become a touchstone in the culture wars over abortion will have a massive shrine and education center erected in her honor in Springfield on the grounds of the former Chiara Center.

The site at 4875 Laverna Road will be located near what has been the motherhouse of the Hospital Sisters of Saint Francis. The order of Catholic sisters, which has operated medical facilities throughout the world, has worked with Springfield Bishop Thomas John Paprocki to repurpose the facility.

One of the past purposes of the facility was to serve as a spiritual retreat for people from various religious backgrounds. Dan Frachey, who ran the retreat center, said many of the groups visiting were evangelical or mainline Protestant. He added they even hosted a group of Buddhists.

But Mike Christie, chief of staff for the Springfield Diocese, said the facility will now take on a more Catholic flavor.

About 45 sisters continue to live on the grounds in an assisted living and nursing home facility. Their median age is 85.

A shrine and center dedicated to St. Gianna will become the centerpiece of the revamped facility.

In 1962, Dr. Gianna Beretta Moll, a pediatrician, was diagnosed with a benign tumor in her uterus while she was pregnant with her fourth child. She refused an abortion and hysterectomy despite being told carrying the child to term would almost certainly result in her death.

She died one week after giving birth to her daughter, who is also named Gianna.

Saint Gianna stands out in Catholic hagiography because she was a layperson and a mother. She is the first saint in the history of the church to have her husband present at her canonization.

"Just think about it. Her daughter can pray to Saint Mom," said Andrew Hansen, a spokesperson for the Springfield Diocese. The daughter, Dr. Gianna Molla, who is also a physician, will take up residence in Springfield and is working with Paprocki to see that the shrine is completed.

The shrine and the St. Gianna Beretta Molla and Pietro Molla International Center for Family and Life will cost millions of dollars to build, chief of staff Christie said. The exact cost and construction schedule have not yet been determined because the project is still in the planning stages, but Christie added his best guess is that construction will begin in the next year. The project will be funded by money raised by St. Gianna's foundation.

The site is envisioned to be a place of prayer, learning, study and spirituality for pilgrims from around the world.

Molla has said that she chose Springfield because of Paprocki's leadership and commitment to defend innocent life. Ultimately, she said, "It was God who chose Springfield." She said she plans to live on the grounds once the center is open.

The center will include:

• A replica of the spousal home of Gianna and Pietro as it was in Ponte Nuovo of Magenta in Milan, Italy

• A shrine church of St. Gianna

• A rectory for visiting clergy

Steven Millies, a professor of public theology at the Catholic Theological Union in Chicago, said the center is a reflection of politics within the church.

"It's intended to be a gathering place and it's intended to provide a kind of cultural armament for Catholics in the United States and maybe even from other places, who come to visit, then they go out and engage in the culture war. It's not quite indoctrination and it's not quite Dollywood, but it's somewhere in between."

Millies said St. Gianna's choice reflects the long-held teaching of the Catholic Church that during childbirth the life of the infant is to take priority over that of the mother.

"I don't see that changing anytime soon," he added.

He noted that the Catholic leadership most supportive of creating the shrine are among the most conservative in the church. Among them, he said, is Bishop Paprocki, U.S. Cardinal Raymond Burke and Archbishop Samuel Aquilla of Denver.

Christie, of the Springfield diocese, added that while construction on the campus will give Springfield an economic boost, that won't be the most significant impact.

"The bigger impact for the local economy likely will be the travel and tourism aspect of the pilgrims visiting from around the country and internationally," he said.  "One of the challenges Springfield confronts is same-day tourism. We don't have enough visitors staying overnight or for multiple nights.  A pilgrimage site such as this, with international devotion, is a real economic opportunity for the community. As an indicative point, the coverage of Dr. Gianna's announcement of this center in Springfield was coast-to-coast in Catholic media, including front-page coverage in national and international Catholic media outlets."

St. Gianna is known as a saint for mothers, families, health care workers and the pro-life cause.

Also locating on the grounds will be the Evermode Institute, which will be responsible for providing religious education to teachers in Catholic schools. It will be operated by the Norbertine Fathers from Orange, California, who will teach classes both virtually and in person. The first priest is expected to arrive in September.

Bishop Kevin Vann, a Springfield native, currently oversees the Diocese of Orange. He made headlines in 2004 while pastor of Blessed Sacrament Parish in Springfield for stating that he would be "reticent" in giving communion to US Senator Dick Durbin, a former parishioner whose "pro-choice position puts him really outside of communion or unity with the Church's teachings on life."