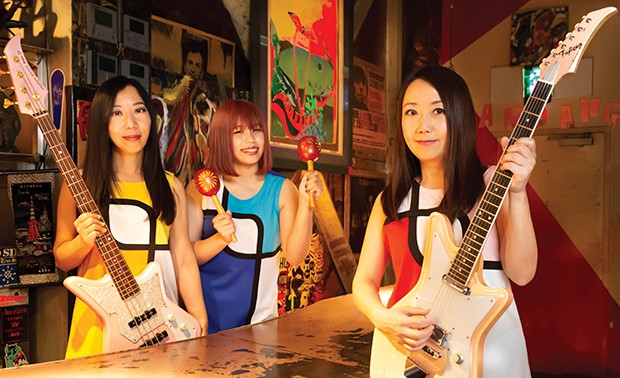 From humble beginnings in their hometown of Osaka, Japan, as a DIY, punk-pop-rock band back in 1981, this group of two sisters, Naoko (vocals, guitar) and Atsuko (bass, vocals), along with Risa (drums, vocals) is still going strong in 2019. With a new album, Sweet Candy Power, out this summer, supported by a current two-month North American tour and followed by nearly two more months in Australia and New Zealand, Shonen Knife continues to have fun playing arresting rock music for discerning audiences. On their way to becoming international ambassadors in music and culture for Japan, they’ve shared the stage with Nirvana, Sonic Youth, the Ramones and Black Flag, recorded a song for the Powerpuff Girls cartoon, made appearances on Lollapalooza, MTV’s “120 Minutes” and “Beavis & Butthead,” all the while recording new albums and touring the world. So yes, you should go see them this Monday night on a wooden stage set in a Hardee’s parking lot on Stevenson Drive in Springfield, Illinois, joined by the amazing Hooten Hallers from Columbia, Missouri.