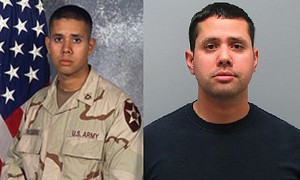 Samuel Rosario is due for sentencing tomorrow.

That he’ll get probation is almost certain. The former Springfield police officer had never been in trouble before he lost his temper in 2017 and challenged a rude youth to fisticuffs that the whole world watched via body cam. The front-yard fight didn’t last long. Injuries were so slight that Rosario was acquitted of battery resulting in bodily harm.

Official misconduct was an easier call for jurors. Everyone knows that cops aren’t supposed to punch people, and so Rosario now is a felon. It doesn’t matter that Robert Humes, shortly after getting his butt kicked, told police that Rosario should be promoted (he’s since sued both Rosario and the city in federal court). It doesn’t matter that Rosario, who saw combat in Iraq, had been diagnosed with post-traumatic stress disorder and was on antidepressants.

Sangamon County state’s attorney Dan Wright went for the easy pelt. The right call was veterans court, a program patterned after drug court – Rosario could have been held accountable while getting a chance to escape a felony tag. That’s what Wright’s predecessor was considering before becoming U.S. attorney. But Wright doesn’t have as much experience, plus he’s facing voters next year, and so he played it safe.

“Sgt. Rosario saved my life.” That was the title of an email I received last weekend from Christopher Pelkey, who recently learned that the former Army sergeant is now a criminal. During his military days, Pelkey and others say, Rosario was the soldier every soldier should be.

Rosario spent a year in Iraq and saw plenty. Within five months, two members of his platoon were killed while tasked with keeping a vital road clear of insurgents and improvised explosive devices. The mission was dubbed Operation Mad Max. Twice, and on the same day, Rosario helped rescue wounded comrades from bomb-stricken vehicles. “Rosario’s knowledge and professionalism ensured two American soldiers were treated and stabilized,” his platoon leader wrote in recommending that Rosario receive a citation. “His swift actions helped save vital limbs and lives. …Under extreme conditions, PFC Rosario sets the highest standard for an American soldier.” A commander once wrote that he was the best radio telephone operator in his company: “Stands alone.”

By the time Pelkey met him, Rosario was a sergeant, safely stateside and less than a year from honorable discharge. Pelkey, a Bible college student turned recruit, was on his way to hell in Afghanistan. He remembers well what Rosario taught him and other green soldiers. “I showed up scared, because we were deploying in six months,” Pelkey recalls. “I was pretty insecure about it all. I knew we’d be seeing combat soon. He was so stern and so firm and so in charge, but at the same time there was just this undertone of ‘I care, I’m only doing this because I love you and I want you to survive.’ Man, he just did it so perfect. We all looked up to him.”

Some lessons were hand-to-hand. “I’ll never forget rolling on the mat, him telling me ‘Here’s how you do it – calm down, you can think this through,’” Pelkey told me. “When I was in Afghanistan, I was fighting for my life. I had to use exactly what he trained me to do, and I’ll never forget it. I had a nine-mil tucked in my pants, a little bit of protection. Someone came in, I had to fight him off – I had to pull my knife. I remember hearing Sgt. Rosario’s voice in my head, telling me to remain calm. I buried that knife deep in that guy. I walked out of that room.”

Sobs punctuate the recollection. Pelkey is in a bad way, and he knows it. “I haven’t done shit since I got out of the military,” Pelkey tells me. “He said ‘I’m going to try.’ He could have sat in his house, chased everyone away, like I did, don’t have no friends, don’t have no family. We all know we’re fucked up, but because he tried, he’s going to be punished. It just blows my mind.”

Maybe Pelkey is lying. All I have is an email and an interview and Army records that show he was sent into deep shit, just like Rosario. But no one disputes that combat veterans face things most of us can’t imagine, even after wars end. And maybe Rosario represents more than just himself.

Wright has said that this case shows that no one is above the law. OK, but Sangamon County sheriff’s deputy Travis Koester, son of a retired lieutenant, remains on the payroll, despite lying in court and tasing an innocent woman who collected $150,000 after suing the country. Originally charged with official misconduct – just like Rosario – Steven Stirmell, a former Jerome cop whose dad was village mayor, pled to a misdemeanor that came with probation and a promise to never again be a cop after he arrested the daughter of Democratic Party honcho Todd Renfrow, then tried walking it back. We also have Joseph Zeid Langan, who groped a woman in his Southern View police cruiser after having previously departed the Springfield Police Department when a used condom bolstered a prostitute’s accusation that he’d had sex while on duty. He ended up with disorderly conduct convictions, plus a promise to never be a cop. He became a police dispatcher at University of Illinois Springfield.

Rosario’s biggest mistake, it seems to me, is not being from here. He came from Texas. If he’d graduated from Sacred Heart-Griffin, or even Lanphier, perhaps this would have been handled differently. Only Wright knows that, and whether he’s proud of his pelt.