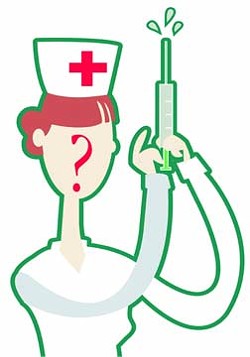 Quinn approved the law on July 26, 2010, mandating that nursing homes kept a minimum ratio of nurses to patients. But that hasn’t happened, according to state Sen. Jacqueline Collins, D-Chicago.

The reform law was supposed to provide for annual increases in staff numbers to help address those problems, but Collins told reporters on Feb. 28 that staffing issues continue a year after Quinn signed the law. Collins co-sponsored the law with Sen. Heather Steans, D-Chicago, and Rep. Barbara Flynn Currie, D-Chicago.

“In the bill, we did raise staffing levels over a period of time,” Collins said. “However, it’s not just the issue of staffing. We know that the critical issue with staffing is about who provides the care.”

In 2009, an investigation by the The Chicago Reporter found that the amount of direct care received from RNs is the factor most highly correlated with nursing home ratings and cannot be below the Center for Medicaid and Medicare Service minimum level of .75 hours – or 45 minutes – of patient care per day.

The report also found that patients at majority white nursing homes often had care provided by registered nurses, or RNs, while majority African-American homes had only licensed practicing nurses, or LPNs, providing care. According to the Illinois Nurse Practice Act, RNs have the sole responsibility of completing resident assessments and creating a nursing care plan, while LPNs are not permitted to complete a patient assessment or initiate a care plan to residents of nursing homes. LPNs provide care under the direction of a doctor or RN.

“Illinois still lead the nation with 26 majority-black homes that received the lowest possible rating from Nursing Home Compare,” Collins said. Nursing Home Compare is a database that provides information about every Medicare and Medicaid-certified nursing home in the U.S.

Collins said that during the negotiations for the reform law, she was assured by the governor’s office that the skilled nursing time issue could be addressed through rulemaking. Collins said the law was originally intended to ensure that 20 percent of staff time be provided by RNs.

David Vinkler, associate state director of the American Association of Retired Persons (AARP), said that the proposed 20 percent of staff time represents an increase over time for patient per day care with the highest amount of time starting in 2014.

Sen. Collins said that minimum staffing levels at nursing homes are supposed to provide at least 3.8 hours per resident per day care, with 45 minutes of direct care by a RN starting in 2014.

“Theoretically, a nursing home could hire all LPNs to provide direct care and not have any RNs actually doing care,” Vinkler said. “So, when somebody needs something that only an RN can provide, like injections or oxygen, which are relatively common in a nursing home, there actually might not be anyone that can do that.

“It’s astounding to a lot of people that we would even have to have this debate,” he continued.

Failing on his mandate