Selling off the family silver

Is the state museum building at risk? 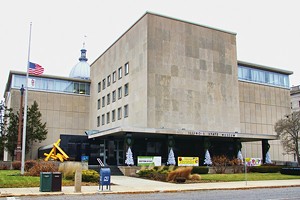 Bruce Rauner’s campaign to destroy the Illinois State Museum risks losing tourist income, the services of top scientists and administrators and priceless artifacts, not to mention any claim Illinois might make to being a civilized commonwealth. Might there be yet one more loss – the loss of the museum building at Spring and Edwards?

I think it’s a very good building in strictly architectural terms, regardless of what’s inside it. (I don’t know who to compliment; none of the accounts of its construction I have read mentioned the name of the architect.) Press accounts in the day said that “the exterior will be of the monumental type” appropriate for the setting, “monumental” meaning that it was clad in the same limestone and polished granite used in every other building, hell in every water fountain in the state complex. (The building is best revealed from a distance, say, from diagonally across the intersection of Spring and Edwards.) But it is strikingly Modern in being handsome rather than beautiful and boasting public space that tries to explain itself to visitors rather than impress them – a connoisseur’s building.

Rauner already has endorsed selling off the family silver to pay the rent by pricing out the Thompson Center. The site has profit potential; surely a well-heeled lobbying group would pay handsomely to be able to build offices so close to the Statehouse that they could blow kisses to favorite lawmakers through an open window. However, that building – nearly windowless and with extra-high ground floor spaces on a cramped lot – was built specifically for the museum, and it would be as tricky to repurpose as Helmut Jahn’s glass big top in the Loop. But while the State of Illinois can do wonders with dropped ceilings and drywall, converting the museum building for conventional bureaucratic uses is pointless if Mr. Rauner gets his way, because there won’t be a conventional bureaucracy to house.

Seriously, that building’s specialized layout might prove to be its doom. It would take imagination and daring to convert such a building, and the state has never shown much of either in its property dealings. It also would take money. Mr. Rauner’s only revenue policy so far as I can tell is to ask a rich person for money to run state facilities; this, to borrow a favorite phrase of the governor, is not sustainable. While there’s been no talk of razing the 55-year-old building, Richie Daley gave no warning before he ordered City of Chicago backhoes into Meigs Field after dark to tear up the runway after he became frustrated with the opposition to his plan to shut that airport down.

I think it more likely that the museum building will suffer a fate similar to that of the Illinois State Armory four blocks away. As I pointed out in this space in “Protecting the protector,” the armory has been starved of maintenance while state officials dither about what to do with it. When it came to the armory, the state behaved like your neighbor who let the roof of his house fall in because he keeps expecting to win the lottery so he can afford a new one. There were once “plans” to replace it, but plans to build anything in the Capitol complex are in fact little more than hopes.

The other day the SJ-R’s Tim Landis reminded us that a 2012 Illinois State Capitol Master Plan envisioned the armory as a new home for the Illinois State Museum. That would have solved three problems – 1) what do with the armory now that public safety is threatened not by men bearing arms but money, 2) how to provide the museum with a larger setting for its anthropological and natural history exhibits and 3) how to provide proper exhibition space for the state’s art collection, by converting the present building into an art museum.

Is it nuts to worry that the state museum building might be torn down? I don’t like to think so. I prefer to think that dithering will in this case serve the public interest, that Illinois will eventually emerge from Raunerism as from a fever, and we will get our museum back bit by bit. But then it was nuts two years ago to worry that the museum inside it might be closed. One of the themes that runs through the anthropological exhibits of the shuttered State Museum is the collapse of past cultures in what is now the state of Illinois. It would be a pity if future Illinoisans don’t have a museum where they might learn about the collapse of this one.

The power of the minority