Selling off a metaphor

Should the State of Illinois sell the Thompson Center? 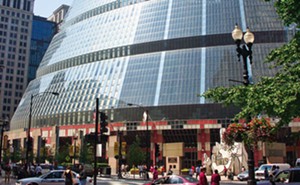 The Thompson Center was designed by Helmut Jahn, then of Murphy/Jahn, Architects. Jahn is a very successful and intermittently capable architect. His design for what was first known as the State of Illinois Building – a building open to all meant to house a government open to all – was a noble gesture. Unfortunately, metaphors usually make lousy buildings. Architect Jahn created a marvelous public space, but gave Illinois a poor public building that had problems from its opening, and cost double the original estimate to boot.

The Thompson Center’s lousiness made it influential in Illinois, in a perverse way. Two years after the then State of Illinois Center opened in 1985, the City of Chicago undertook its own major building project – a new central library. This is Chicago, remember, so it was a big project; the finished building ended up in the Guinness Book of World Records as the largest public library building in the world.

Rather than commission an architect privately, as the Thompson administration had done, the city called for a public “design/build” competition. (Jahn’s was one of the five firms to submit a design for the library.) Critics complained at the time that the aim of the process was not good design but risk management – and the risk the city wanted to manage was that of ending up with a Thompson Center. Stung by complaints that Jahn’s building didn’t look like anybody’s idea of a state government building, too many of the library competition’s judges opted for the design that looked most like everybody’s idea of a public library. The result was not merely a flawed building, in my opinion, but a failed one.

Should the Thompson Center be sold? The egregious Blagojevich also wanted to sell it, which is good evidence that it is a bad idea. More to the point, can it be sold? It’s problematic as office space, but what else could it be used for? A hotel? A mall? More than one wag has suggested that an aging spaceship on Randolph would make a good home for George Lucas’ museum of kitsch.

Officials in Oregon’s biggest city are facing the same dilemma with their main office building. The Portland Building, by post-modernist Michael Graves, opened three years before Jahn’s building. Whimsical on the outside, the building inside is dark, it leaks and it is cramped. People don’t like to work in it, and the city doesn’t like to keep spending money to maintain it. As the State of Illinois has done with its building, the City of Portland neglected Graves’ building for years, ignoring major structural problems that now will take some $100 million to fix. The alternative is to tear it down and build something new that would cost probably four times that much.

In an interview last summer, Tribune architecture critic Blair Kamin referred to the Thompson Center as state government’s de facto Capitol in Chicago. It isn’t, really; it has no ceremonial or no legislative chambers, and the decisions that determine Illinois’ political, social and economic agendas are not made at Clark and Randolph but in the office suites in the corporate towers that surround it. What the Thompson Center is, sadly, is not Chicago’s Capitol but Chicago’s Stratton Building.

Nonetheless, the Thompson Center is a major building, and for all its faults it is a fitting venue for the people’s business in Chicago – indeed, in some ways it is such a venue because of its faults. (Not all the metaphors that a building expresses are intended by the architect.) Selling a building like this instead of fixing it is no different from cutting a social program instead of reforming it. As solutions, both are simple, and achieve short-term returns at the cost of long-term gains – in short, they are business solutions. Let’s hope Illinois’ new CEO learns to be a governor before he makes a deal for it the rest of us will regret.