Seeing is believing – isn’t it? 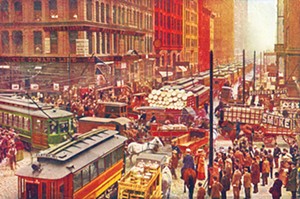 Everyone likes picture books, and for mostly good reasons. Picture books about history are especially intriguing, in the same way that pictures of cities you’ve never been to are intriguing. That said, it is not possible to tell the history of any place in pictures, and Gerald A. Danzer, author of Illinois: A History in Pictures, concedes that. No matter how many pictures you have, and how well chosen, a picture is too vulnerable to multiple interpretations, or to no interpretation at all, to tell a coherent story. That’s why his book, which came out in 2012, was less a history of Illinois in pictures than a history of Illinois with pictures.

I was looking the other day at Danzer’s book, specifically at the recently released paperback version from the University of Illinois Press. The book’s more than one hundred “pictures” – in fact photographs, engravings and lithographs, paintings and drawings, maps – are accompanied by a conventional chronological narrative summary of the state’s history (accompanied by timelines). In his preface, the author explains that this text was meant to provide “a historical context to connect the images with the thoughts and actions that have defined this place as Illinois.” Only the text does little connecting, as it is not keyed to the images. So we have two histories, one in words, the other in images. The first is more coherent, the second more interesting.

The text portion of the book reads like a school primer in more ways than one. Its treatment of seminal events in the state’s past is decorous to a fault. Consider our Native American peoples. That population was decimated by imported diseases, targeted by  guerilla warfare and finally dispossessed and herded west so Euro-Americans could get on with the business of subdividing their lands for sale. About this ruthless ethnic cleansing Danzer – having noted that the Northwest Ordinance of 1787 pledged that Indian land would never be taken without consent – says “the vision of the future enunciated [in the ordinance] did not seem to have coexistence with the Native Americans as a priority.” No, it did not, just as racial politics in Chicago from the 1920s through the 70s did not have racial intermarriage as a priority.

Danzer’s final chapter, recalling Illinois since 1990, is more a tourism brochure than a history, but then Illinois no longer attracts the nation’s best illustrators and artists because the controversies, the characters, the great events, the heroic public works are all elsewhere. And the reader is obliged to complain that while the text is indexed, the images and their legends are not.

Many of these images will be familiar to even casual students of Illinois history, among them John Caspar Wild’s lithograph of Mormon-era Galena, Kar Bodmer’s painting of a prairie farm from the 1830s and Olof Krans’ painting of the Bishop Hill colony. I was pleased to see so many examples of the work from the pre-photograph era. Engravers and pen-and-ink artists adorned with Illinois scenes the county histories and the catalogs and magazines like Harper’s and the Illustrated London News and Frank Leslie’s Illustrated Newspaper. As for the modern era, I am always dazzled by the work that came out of Chicago in the early decades of the 20th century – the Illinois as Oz on the cover of an Illinois Farmers’ Institute “pocket books of facts,” or the “The Spirit of Black Partridge Seeking Old Fort Dearborn” that was commissioned in 1922 for the cover of a child’s history given away at a local amusement park or H.H. Petit’s gorgeous aerial view of the Century of Progress exposition in 1933.

One lessons from Danzer’s history is that our era is hardly the first to manipulate images to effect. The illustrators of subscription county histories gave us images of impossibly prosperous and tidy farms, with farm wagons hauled by what look like thoroughbred Arabians and cattle sporting first-prize ribbons. This is not idealized reality, rather it verges on fantasy. Pictures can be worth a thousand words, but they are not always true words.

But then, what is “true”? Another good example from Danzer’s selection is the depiction of a traffic jam at Randolph and Dearborn in Chicago’s Loop in May of 1909, showing streetcars, freight wagons, carriages and pedestrians getting nowhere fast. The image was much-reproduced in various versions and media; the one Danzer picked appears to be a painting taken from the photo or (less likely to my eye) a colorized version of the photo.

Danzer, professor emeritus of history at the University of Illinois at Chicago, notes that the madness was probably “staged.” “Contrived” is a better term; apparently the photographer persuaded traffic cops to simply stop directing traffic for five minutes, then recorded the ensuing chaos. Not exactly a false image then, and one that is probably truer to the reality of Chicago’s mad growth in that era than any other.