Timothee Chalamet as Paul in Dune.

Denis Villeneuve has made no small plans where his adaptation of Frank Herbert's Dune is concerned. You'd be hard-pressed to find a film with such an epic scope both visually and narratively as the director rises to the challenge of realizing this sprawling story. Politics, religion, ecology and social mores all play a part in this tale set in the distant future where the regal Atreides family has been charged with governing Arrakis, a desert planet that contains Spice, the most valuable resource in the universe. A powerful hallucinogen, it allows for interstellar space travel that's vital for trade.

Court intrigue is prevalent as the citizens of Arrakis – the Freman – do not trust their new leader Duke Leto (Oscar Issac), though they see something in his son, Paul (Timothee Chalamet), suspecting he may be the messiah they've been waiting for generations to appear. It's heady, complex, invigorating stuff supported by grand visuals that are a wonder to behold. Villeneuve has created not only a sci-fi epic for the ages, but a vital reminder of why we go to the movies. This sweeping, immersive experience needs to be seen on the big screen. In theaters. 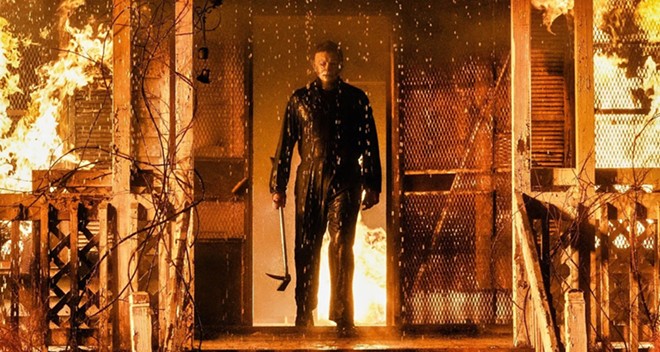 The question I had while suffering through Halloween Kills was "Why?" Why does Michael Myers kill? Why, after slaying one unfortunate, does he proceed to drive five more knives into the corpse? Why, in fact, was he in this couple's house? They had nothing he needed. Why also is Michael immune to gunshots, fire, excessive beatings and all manner of fatal activities? Also, why is it that a mob of Haddonfield citizens mistake a mental patient for Michael – when it is obvious to anyone with two eyes it isn't – and drive him to his death? Why are movies like this made?

Well, the obvious answer is money, as the franchise inexplicably continues to rake in the cash, the same reason star Jamie Lee Curtis, who's on board in a glorified supporting role, hangs around. This is a vile, nonsensical exercise in wanton mayhem and gore, the sort of movie that gives horror films a bad name. This is nothing but a display of ugliness, an excuse to see us at our worst. Haven't had enough of that lately? In theaters and streaming on Peacock. 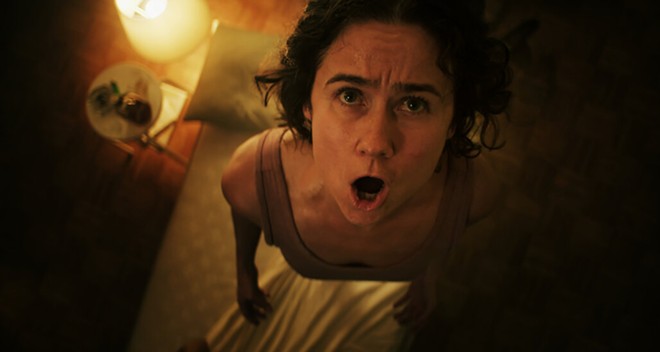 To be sure, Molly (Cecilia Milocco) has had a rough go of it. In the past year, she's tragically lost her lover, had a nervous breakdown as a result, and ended up institutionalized. Still vulnerable, she's gingerly reentering the world, armed with meds, a doctor who checks in with her and a new apartment. She's tentatively trying to find her footing. However, when she tries to sleep in her new digs, she hears a persistent knocking from above. She checks with and then interrogates her neighbors about the sound and all she gets are looks of disbelief. And what of the woman across the way who she sees commit suicide? Did it happen or was it all in her mind?

Knocking, a Swedish import, is a slow-burn thriller that gets under your skin and festers. Director Frida Kempff keeps viewers on their toes, as we can't tell whether what we see is really happening or just in Molly's head. This perspective is off-putting and keeps us on our heels, which is the point. We're effectively in Molly's shoes, an unsettling experience that drives this 78-minute exercise in existential dread. Available through Video on Demand.