Scott Pilgrim plays its own tune 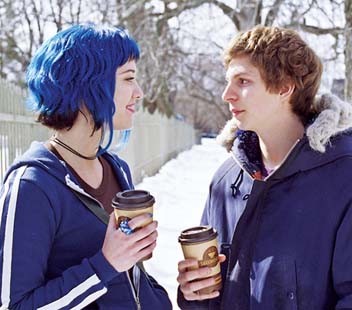 There’s a sense of charm about Scott Pilgrim vs. the World that separates it from all other comic book adaptations and most every other film this summer. Sporting memorable, sympathetic characters, a fresh irreverent tone and fun, fresh performances, the film is a breath of fresh air that tears through its narrative at a breakneck pace, gleefully telling its offbeat love story.

Scott (Michael Cera) is a 20-something who changes girlfriends as often as his underwear. His current squeeze, Knives Chau (Ellen Wong) is about to be kicked to the curb as our hero has been thunderstruck by Ramona Flowers (Mary Elizabeth Winstead), a leather-clad pixie who steals his heart with her hip indifference and come-hither eyes. Scott doesn’t realize he has to defeat her seven evil exes, each of whom have superpowers, in order to live happily ever after.

The superhero premise yields some interesting visual moments but adds little to the story. Only one of Scott’s enemies is dispensed with any sort of panache and we’ve seen this sort of derring-do before. However, what makes the film work is its characters. There’s a quirky chemistry between Cera and Winstead that’s winning, while Kiernan Culkin steals every scene he’s in as Scott’s gay roommate, Wallace. Never without a pointed quip, the actor has great fun delivering deadpan zingers, as does Alison Pill as one of Scott’s exes and the drummer in his band, Sex-Bob-Omb.

The band’s blistering alt-rock numbers drive the film, while director Edgar Wright (Shaun of the Dead) creates a comic book dimension in which sound effects float in the air, folks are cast about like rag dolls and scene transitions are as quick as moving from one comic panel to the next. In the end, the film amuses and dazzles us but what we’ll remember is Scott’s plight, a love quest that turns poignant and has us hoping all the trouble he’s gone through proves worthwhile.