You are what you eat 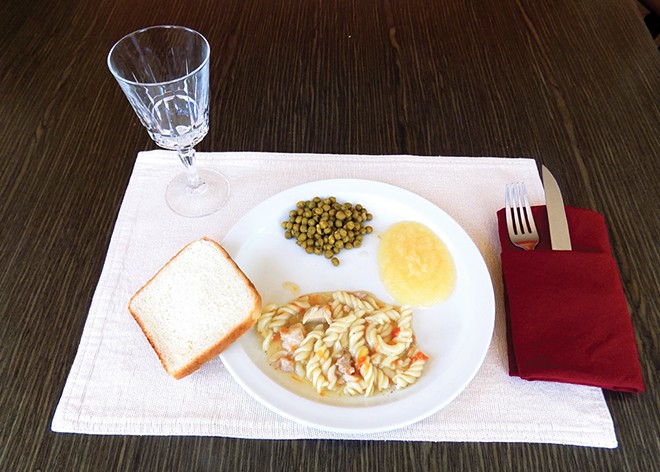 
After his cancer diagnosis, the late Warren Zevon advised those he would leave behind to enjoy every sandwich.

He never dined in the school cafeterias of my youth.

On good days, there was chili served with cinnamon rolls. On bad days, it was mystery meat casserole or hockey pucks masquerading as hamburger patties or fish that reeked of fish. Mostly, there were bad days, or maybe I'm a picky eater.

They say that there is no such thing as a free lunch, but, in fact, there is, leastwise, for students in Springfield School District 186. More than half the district's kids come from low-income households, and so everyone qualifies for free meals under federal rules. Not everyone takes advantage. On any given day, the district, with more than 14,000 students, has distributed about 1,500 grab-and-go lunches since schools closed in March.

The numbers are hard to figure, given so many people are broke while the district's Facebook page features a photo of a turkey sandwich that looks straight from Panera Bread Co. School board members, lately, have become food critics. "Kids throw away a lot of food, I don't care what you say," Judith Johnson told colleagues at the latest meeting. Students, she'd said at the previous gathering, shouldn't be getting carbohydrate-laden junk food.

Johnson's brethren protested, but not too much.

"My kids have been getting those meals: They're school meals," offered board member Anthony Mares last month. Last week, board member Micah Miller said the food is fine – like Mares, his kids have been eating school lunches that the district says are the same now as ever. "In our case, if they're not eating it, it's because it's too healthy," Miller declared, as if he'd taken a wrong turn and ended up at Golden Corral. "They're getting a variety of fruits and vegetables. Ham and cheese, turkey and cheese, PB and J's. We've never had anything bad."

What's good and what's bad is a matter of opinion, and opinions vary. Television food shows have competitions aimed at deciding who is the best chef. Why not in Springfield? And so I called in some favors and set up a blind taste test: Which institution serves the best food, the school district or the Sangamon County jail?

Inspiration did not come from the blue. I once spent a day in jail as an undercover journalist and was surprised by two things: the absence of fouls while playing basketball and the reaction of inmates when lunch was served. The menu included macaroni-and-cheese, salad and some sort of cake. A trading frenzy broke out, with prisoners offering desserts in exchange for entrees or side dishes or vice versa. Once bargains were struck, deals were consummated by scooping up food with bare hands. I gave away my tray, but the stuff smelled better than what I remembered from school, and not much was left over.

Perhaps signaling pandemic ennui, three judges, including two lawyers and a lobbyist, were not difficult to round up last week. The school district's iron chefs had prepared tater tots and corn dogs. I suppose fried potato shreds or corn-dog batter might qualify as vegetables. The jail, by contrast, had all food groups covered, with offerings of apple sauce, peas and bread. The main course, chicken and noodles, sported chunks of carrot that livened an otherwise beige presentation with flecks of orange.

The corn dogs were de-sticked on the theory that judges would figure they didn't come from jail, where guards can't be too careful when it comes to shivs. It didn't help. Even before taking a bite, judges guessed they were eating food cooked for kids, corn dogs being corn dogs. Aside from a lack of mustard (or any other condiments, not to mention salt or pepper), there were few complaints. Not as good as fair fare, the panel decreed, but certainly edible. "I don't know who this is, but it's better than I expected," one panelist concluded. "I love tater tots."

Jail apple sauce proved a star. Every judge ate every bite. "Tastes straight from a Mott's jar," said one, who suggested that a touch of cinnamon would make it even better.

Like a lot of kids, one of the lawyers refused to eat his peas on general principle, but the other two judges, while not raving, did not retch. "The peas and bread are fine," one said. Not so the chicken and noodles, which judges agreed had a break-your-spirit aura.

"It's got a bad mouthfeel," one judge pronounced. "There's no texture. There's no crunch." Another was more direct: "It's like eating other people's snot." No one got to a third bite.

The verdict was unanimous: When it comes to cuisine, students have it better than inmates. But I still say most folks are better off cooking at home. Bon appetit.