Investment needed to preserve one of nation's first Black orphanages

In 1898, Eva Carroll Monroe opened one of the first Black orphanages in the nation, 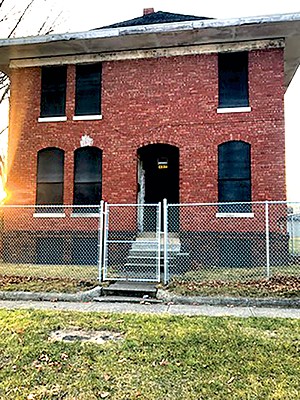 Photo by Vincent “June” Chappelle
The Lincoln Colored Home, which is on the National Register of Historic Places, is in need of renovation and repair.
which she ran for 35 years. It's a facet of Springfield's history that doesn't get the attention it deserves.

Mary Frances – a professor, artist and activist who lives in Springfield – set out to help rectify that last year with a documentary titled Eva Carroll Monroe and the Lincoln Colored Home. During a webinar last month, she explained why she felt called to create the film. "I had gone by the (Lincoln) Colored Home. I didn't know what it was and I did a little research and I found hardly anything about Eva."

Eva Carroll Monroe was born during Reconstruction in Kewanee, Illinois, in 1868. Her dedication to serving others stemmed from the loss of her mother. Monroe, only 12 years old when her mother died, was left responsible for helping to rear her younger siblings.

During the turn of the century, many African Americans fought to recover from the trauma of enslavement while grappling with white supremacy. It's a tumultuous battle still being fought, due to systemic oppression – particularly in places in and near the Bible Belt, places like Springfield.

Monroe faced adversity to care for Black people within the community when she opened the Lincoln Colored Old Folks and Orphans Home in March of 1898, with the help of her sister, Olive, and monetary assistance from Mary Agnes Lawrence, mother of Susan Lawrence Dana. Monroe created a haven for Black youth and elders who would have otherwise been forgotten in the streets or sent to facilities with questionable care.

So how can we ensure that this piece of history, and others like it, will be preserved? The first person I posed this question to was Shawn Gregory. He's one of the city's two Black city council members, and the home is in his ward. Gregory said he would like to see it get similar attention as some of the other historic sites in town. Gregory said if turned into a tourist destination, it could also help drive traffic to the east side, which would be especially beneficial given the railroad project along the 10th Street corridor.

"There hasn't been as much action as there needs to be on these particular homes," said Gregory, who wants to see other historic places on the east side restored as well, such as the John Wycliffe Taylor Home. It served as a school for Black children in the early 1900s.

Frank Butterfield, director of the Springfield office of Landmarks Illinois, said the Lincoln Colored Home – while currently in poor shape – could still be brought back to life. "To the average passerby, the building might look very rough and beyond rehab." However, "buildings in the first decade of the 20th century were often built with resilience that we don't see today," Butterfield said. "I truly believe that it is one of the most significant structures in Springfield, particularly in connection with Eva Carroll Monroe and her work."

Lt. Gov. Juliana Stratton – the first African American woman to hold her position – learned about the home while visiting the Route History Museum in Springfield last summer. The museum explores Black history in Springfield and along Route 66.

"The Lincoln Colored Home is an important part of both African American and state history," said Stratton in a statement to Illinois Times. "Monroe should be more widely hailed for her compassion and dedication to serving others. The Lincoln Colored Home itself is on the National Register of Historic Places and, while it stands in need of repair, it remains a visible reminder of the power of collective impact in caring for our most vulnerable children."

The home is currently owned by the estate of the late Lyman LaRue Hubbard, Sr. – a former Tuskegee Airman whose family has resided in the greater Springfield area for more than 165 years.

In 2016, a 4-H club adopted the home as a project. Lee Hubbard, Lyman's son, told the State Journal-Register he applauded the efforts and wanted to get traction to repair the home – an effort important to his father who died in 2012. "It still has the same magic about it," Hubbard told the newspaper. "It is so worth saving."

Black historical monuments are just as important as the plethora of others that serve to tell the history of the white status quo. They are spaces that, for years, were havens for people who faced ostracism and racism.

It would be validating to see places such as the Lincoln Colored Home get the care and respect that historical white spaces receive. Are we to let the legacy of Monroe and others fade into the distance? Or will something be done in order to preserve them for future generations to know their greatness?