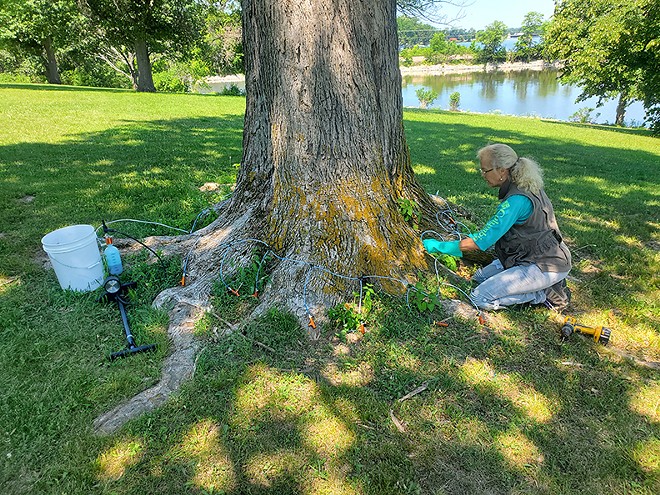 The blue ash is an uncommon Illinois ash species. Unlike green, white and black ash trees, the blue ash has some natural resistance to the emerald ash borer. Sarah Lindholm, biologist with Springfield's CWLP Division of Land and Water Resources, and Guy Sternberg, Starhill Forest Arboretum, are teaming up to treat some majestic blue ash trees, at Cotton Hill Park on Lake Springfield and in Elkhart, with the hope of saving them.

There are 12 old-growth blue ash trees at Cotton Hill Park, 32 old blue ash trees within the Elkhart Hill Grove Nature Preserve in Logan County and some additional blue ash trees on private property adjacent to the nature preserve. The next closest notable grove of blue ash is a small population near Bloomington. "Few others exist in Illinois, and probably none are as spectacular as the Elkhart Hill Grove nor as easily visible and striking as the old trees at Cotton Hill Park," says Sternberg. Sternberg estimates these trees were growing prior to the Civil War. This will be verified through future age determination using dendrochronological examination. "At Elkhart Hill, the blue ash trees tower over huge sugar maples that form the forest canopy and shade the famous bluebell understory found there," says Sternberg.

Blue ash trees are more resistant to the emerald ash borer because they have some genetic similarity to Manchurian ash, an Asian ash species that is resistant to the beetle. The beetle population is expected to diminish soon, due to the loss of most of the ash trees they feed upon, but currently they are at their peak. The intent of treatment is to build on some of their innate resistance to the borer and give them a boost to survive after the population of emerald ash borers declines.

The treatment lasts at least two years and involves injecting a new EPA-approved formulation of emamectine benzoate insecticide. The product is absorbed by the tree's vascular system and spreads throughout the tree, killing the beetle larvae and preventing development of more. There is no hazard to other organisms or the environment because ash trees are pollinated by wind, and none of the insecticide is exposed on the outside of the tree. A single treatment could give the trees the boost they need to prevail once the beetle population begins to decline. "We have great hope for the future of these treated trees, and we will be watching closely as the Great Borer War unfolds," says Sternberg.

Sternberg also is working with the U.S. Department of Agriculture to identify sites for release of small predatory insects that are known to control the borers in their home range, but it will take some time for these predators to become established. They have been under controlled containment observation for many years to ensure that they will not cause problems for non-target organisms. Four species are approved to be released. For more information, go to https://tinyurl.com/xf9zyu.

Sarah Lindholm is a biologist with Springfield's CWLP Division of Land and Water Resources. She has also been providing additional technical assistance as a volunteer for Starhill Forest.

Guy Sternberg worked at the Illinois Department of Natural Resources for 32 years. He is a certified arborist, "retired" landscape architect and owner and manager of Starhill Forest Arboretum, which holds one of the most extensive oak genus living reference collections in North America. He promotes awareness and appreciation of historic trees. Along with his wife, Edie, he has propagated and grown thousands of species of trees. He is known internationally as an expert on oaks. Sternberg has recently written and presented programs about trees for a changing climate. He is an advocate for communities planting a diversity of tree species to provide greater resiliency against pests, environmental stressors and climate change.

Karen Ackerman Witter has a master's degree in ecology and started her long career in Illinois state government at the Department of Conservation, which is where she first met Guy Sternberg. She has long admired Guy and has consulted him frequently about the massive old oak tree on her property and her three emerald ash borer-infected ash trees, which are scheduled to be cut down this summer.