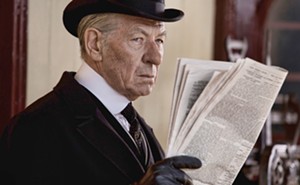 One would think that, what with Sherlock Holmes being the fictional character who’s appeared in more theatrical films than any other, the well would be dry where coming up with new ways to portray and explore him are concerned. And while Mitch Cullin isn’t the only one who’s imagined the detective in his later years with his novel A Slight Trick of the Mind, it could be argued that he did so in the most meaningful and effective manner. Mr. Holmes, the adaptation of that novel, proves to be a delight, not simply because of the prickly, poignant turn by Ian McKellen in the title role but in effectively bringing the character into the modern world, grappling with his place while trying to reconcile his past.

The time is 1947 and Holmes is living in retirement in the rural environs of Sussex, tending bees and helping his widowed housekeeper Mrs. Munro (Laura Linney) raise her son Roger (Milo Parker). Though in his 90’s, he stays active, attempting to get to the bottom of why many of his bees are dying, as well as trying to recall details of his final case, an affair he can’t remember completely but knows its resolution was unsatisfactory. Realizing that his memory has faded and continues to do so, Holmes consults with botanist Masuo Umezaki (Zak Shukor), who recommends prickly ash, a plant found in the devastated ruins of Hiroshima, where both travel to seek it out.

Director Bill Condon seamlessly weaves images from the post-WWII era with those in Holmes’ past as we see his foggy memories play out before us while he strains to put all the pieces of the elusive case together, one that found him following and observing a wife (Hattie Morahan) dealing with bouts of depression. The parallels to this case and Hitchcock’s Vertigo are obvious and one can’t help but draw comparisons between the mental state of James Stewart’s Scottie Ferguson and Holmes. Has his memory faded or is there a bit of repression at play?

This is one of the many questions the film poses across its three storylines, and anyone familiar with how these tales are constructed won’t be surprised that there are more than a few red herrings in the mix. However, events that you might be tempted to call “dead ends” do have their own meaning and impact as the movie ultimately revolves around the inescapable connection between memory and identity and how they dictate how we see the world and ourselves, both past and present.

It’s no surprise that McKellen is great here, bringing a sense of weariness, frustration and ultimately poignancy to the role. Seeing Holmes struggle, as well as vulnerable, is virgin territory and the film plumbs it as much as possible, always anchored by the actor’s humanistic turn. Linney is quite good as well, but as usual I was left hoping for a more fully written role for the actress while Parker proves impressive, sharing the screen with the veteran cast with an ease that belies his age. His scenes with McKellen are an absolute delight.

Condon, Cullin and McKellen pull off the impressive feat of paying homage to Holmesian conventions yet simultaneously deconstructing the character. The detective goes out of his way to discount the many embellishments Dr. Watson and others have made, the most humorous coming when Holmes stumbles into a movie theater to see a film adaptation of one of his adventures, scoffing at the inaccuracies throughout. (The actor playing Holmes in this movie-within-a-movie is Nicholas Rowe, who portrayed the character in Young Sherlock Holmes.) However, as the character objects to the fiction that has sprung up around him, what proves to be the most difficult thing for him to grasp is his own humanity. In applying analysis and logic to solve every mystery that’s come his way, the fact that he cannot fathom the mystery of human emotions – particularly his own – proves to be the movie’s ultimate irony as well as its most emotionally overwhelming aspect.