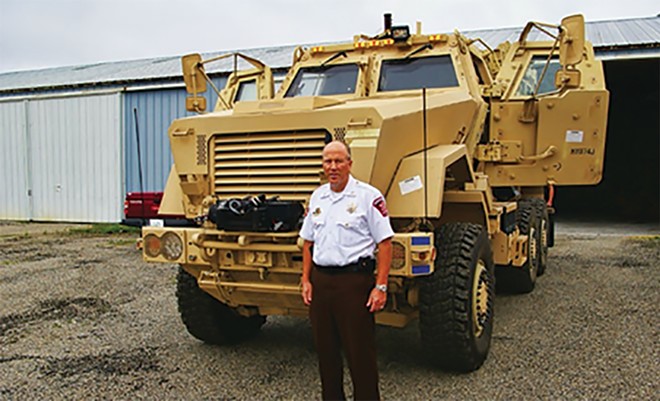 Photo by Bruce Rushton
Sangamon County Sheriff Jack Campbell in 2014 with an armored vehicle that now belongs to the LaSalle County sheriff's office.

Sangamon County Sheriff Jack Campbell wants an armored vehicle but fears that he may be out of luck.

In September, the sheriff's office paid someone to travel to Nevada to kick tires on an RG-31, a veritable subcompact in the world of surplus military vehicles that the Department of Defense sells to police departments for practically nothing – pay transportation costs, the feds have said, and it's yours. Campbell figures that he could bring the vehicle he covets to Springfield for $1,500.

It would replace a mine-resistant ambush-protected vehicle (MRAP in military nomenclature) that the sheriff's office acquired in 2014, then got rid of under former sheriff Wes Barr, who deemed a 27-ton, 11-foot-tall vehicle designed for combat zones unnecessary for a central Illinois police agency. The LaSalle County Sheriff's Department, about 140 miles north of Springfield, is happy to have the MRAP jettisoned by Barr. The vehicle designed for Middle Eastern conflicts is, LaSalle County sheriff's officials say, adept at keeping cops and civilians safe, and it has required practically no maintenance – just gas and go.

"We didn't pay anything to get it," says Jason Martin, chief deputy with the LaSalle County Sheriff's Office. "It's an amazing tool for us to have. ... It's gone out on floods, it's gone out in winter storms. Obviously, the snow doesn't stop it. We've had a shots-fired call."

LaSalle County's MRAP, once owned by the Sangamon County Sheriff's Office, is considerably larger than the vehicle that Campbell has picked out from a Nevada storage lot. An RG-31 weighs a bit more than seven tons and has four wheels; the MRAP given up by Sangamon County and now used by LaSalle County has six wheels and weighs nearly four times as much, more than some Sangamon County bridges, local authorities once worried, are rated to hold.

While the department has picked one out, Campbell says that he's not sure that it ever will arrive. The acquisition process, he says, has bogged down. Between the federal government under Joe Biden and a criminal justice reform bill now on Gov. JB Pritzker's desk that limits the type of surplus military gear police departments can acquire, Campbell says that his department might have to live without a mine-proof vehicle. "We're told that this is kind of on hold," the sheriff says.

The bill awaiting Pritzker's signature prohibits police departments from acquiring tracked armored vehicles – an RG-31 and the MRAP owned by LaSalle County have tires and so would appear allowable under the bill passed by the General Assembly during the recent lame-duck session. The bill also bars police departments from acquiring bayonets or grenade launchers. "We don't need any bayonets – we checked our supply," Campbell quips. The sheriff adds that he isn't interested in grenade launchers, either, and he criticized legislators for banning stuff that cops don't want or need.

"It seems like they've tried to resolve a situation that didn't exist," says the sheriff. Campbell says he worries that the bill will prevent local police agencies from acquiring surplus military gear he hasn't yet imagined.

Meanwhile, the LaSalle County sheriff's department says that it will continue using its MRAP as need arises, which isn't an everyday thing. So far, it hasn't required more diesel fuel than maintenance, Martin says.