How a volcano in Indonesia brought settlers here 200 years ago 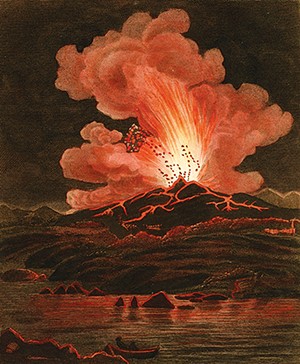 The Tambora volcano in Indonesia erupted in 1815, causing global climate change and economic disruption, which by 1819 had led new settlers to the Sangamon country.

Sangamon County's humble beginnings seem so distant as we approach the bicentennial of the founding of the county on Jan. 30, 1821. Our founders owed their survival largely to the fertile soils created by glaciation, primarily during the Illinoian Period of 191,000 to 130,000 years ago. Native Americans introduced early settlers to corn and several varieties of squash, which became dietary essentials. And the utilization of corn in distillation of alcohol became one of the most traded items and facilitated economic exchanges when other forms of currency were scarce. Honey from wild bee populations substituted for cane sugars and was commonly traded. The Sangamon River and its tributaries, prairie grasses and stands of timber greeted new arrivals. Timber margins extended up to a mile wide along creeks and rivers. Prairie grasses stood nine feet tall at the end of the growing season.

Most of those traveling to the Sangamon country came from the south, entering near Divernon. This access to central Illinois was by an old, well-traveled road known as the Edwards Trace. The portion of the route from Edwardsville to central Illinois was named after Ninian Edwards, the territorial governor. During the War of 1812, Edwards led troops north, passing Clear Lake east of Springfield, to attack the village of Black Partridge at the north end of Lake Pimitoui on the Illinois River, near Peoria. This route has a historic record of use from the 1700s into the 1800s and even may have been used in prehistoric times, based on artifacts found within its corridor. The Edwards Trace was a segment of a much larger north-south route paralleling the Mississippi and Illinois River valleys.

Global events influenced the founding of Sangamon County. In 1815 on the Sanggar peninsula of Sumbawa, Indonesia, the volcano Tambora erupted, causing a global catastrophe. Thus began a series of cascading but seemingly disconnected events. Sulfurous gasses and volcanic ash engulfed the atmosphere, blocking out huge portions of the sunlight, cooling the earth and creating the last historic famine of the western world. The year 1816 became known as the "year without a summer," a year where every month observed a killing frost along the Atlantic seaboard and Europe remained cold and wet. Grain prices rose around the world and Midwest farmers sold all their surplus grain. Lack of feed for livestock pushed Robert Pulliam and others into the Sangamon country, where cattle were fed prairie grass through the winter of 1817.

With high grain prices came purchasing power for the farmer. Thousands borrowed to purchase more land to create larger farms to raise more crops. This worked well until the climate returned to normal in late 1818-1819, when the world food supply stabilized. Notes came due at the banks and land office and low corn prices could not pay the notes. This bust created our first national depression, called the "Panic of 1819." Farmers fled the southern states where there were debtors' prisons. Many came to live on the un-surveyed Kickapoo lands of central Illinois. For most of Illinois history, settlement had been one of natural progression, one farm to another. During this depression there was a leap of 75 miles north beyond government-surveyed lands. Many families came to Sangamon country. Most Native Americans left central Illinois after the War of 1812, but small clusters remained in the Sangamon country. The federal government allowed them to hunt and fish but not grow crops. This was until the public purchased lands, beginning in 1823. The interactions between Native Americans and settlers were generally peaceful. Trading of goods, food, children playing and game hunting were shared between the two communities.

Josiah Meigs, head of government lands, saw the squatters as bad. To him all who did not apply to purchase land were to be arrested, according to an article published in the Edwardsville Spectator. A stinging reply was published in the Spectator to his harsh words by a citizen of the Sangamon country. "Now at the moment when every sympathy of the heart should be enlisted in favor of the poor men least who is unable to purchase – when crying families drives to the public domains the only refuge from starvation – he (Josiah Meigs) comes out with orders to have suits brought to recover damages for the waste committed, and also, to have penniless settler driven from his cabin."

At the county's inception, the buffalo and elk had essentially been extirpated, but deer and small game were plentiful. With time the diminution of wildlife caused reliance on domestic livestock, or forced continued migrations to new territories.

The land we know as Sangamon County was initially governed as a portion of Madison County, with the county seat in Edwardsville. All services were provided by the county, such as sheriff, justice of the peace, marriage licenses, courts and taxes. Sheriff Whiteside of Edwardsville was known to have come to this area to collect taxes, and finding no money in the settlers' possession, gathered all the animal skins being stretched and dried on cabin walls as a form of payment. The amount was said to be several packhorse loads.

By 1819 enough people had settled in the Sangamon region to petition Madison County for a maintained road from Edwardsville to Clear Lake, east of Springfield. Jacob Judy, a surveyor, with the help of local citizens, flagged the Edwards Trace with marker posts set one mile apart, and road commissioners were elected locally to maintain the road. By 1819, the quality of the road was noted by Ferdinand Ernst, a German traveler, as being a "fine well-traveled road." By the election of 1820 population expansion caused two political townships to be formed – Springfield and Forked Prairie. On Jan. 30, 1821, an act proposed by Representative Nathaniel Buckmaster, the state of Illinois created Sangamon County.

At its birth the county was much larger than today. It originally covered all of Sangamon, Menard, Logan, Tazewell, Cass, Mason, Scott and parts of Christian, Woodford, Marshall, McLean and Putnam counties. The first act performed by government in the county was to mark the location of the temporary county seat. This act was carried out by Zachariah Peters and William Drennan by placing a stake near John Kelly's field, at what became the corner of Second and Jefferson streets in Springfield, where a monument now stands. 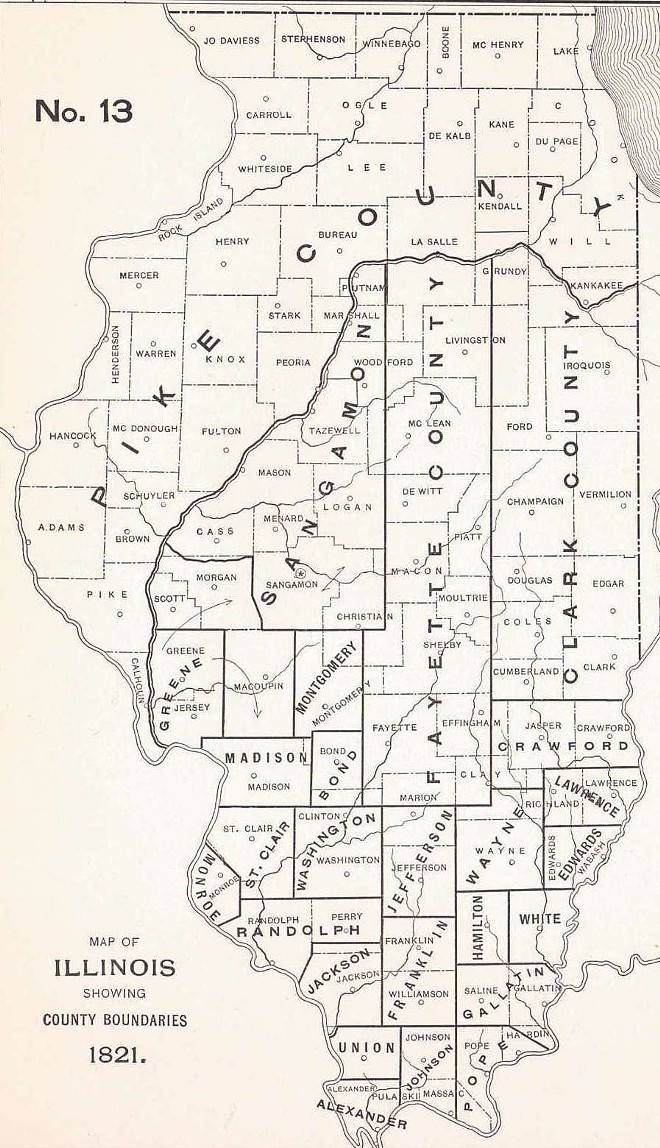 This site, chosen for public utility, became the site of our first courthouse and the center of the community. Most county sites were chosen to be centrally located so no one would have to travel more than a day to do county business. Sangamon County in its infancy was much larger than today but with the rapid filling, it was to be divided into many other counties. Sangamon County with its current boundaries is the result of its last division in 1839.

David M. Brady, "The panic of 1819 : Its cause and effects in Illinois history." This was a program presented to the Sangamon County Historical Society Oct. 17, 2006.

David Brady grew up in Divernon, where he worked many jobs that built relationships with its senior citizens. They enjoyed telling tales of Divernon's glory days as a coal mine community. This was the spark that helped stir David's interest in history. He also worked at Prairie Archives for 12 years, which put him in touch with historians and writers. This encouraged him to research and write Illinois history. He is retired and lives in Springfield.