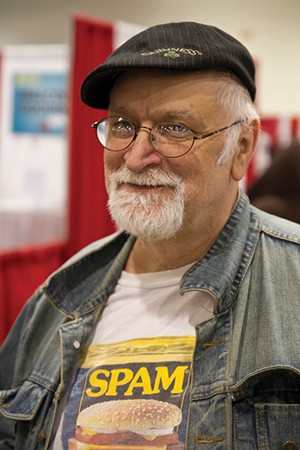 Sam grew up in the village of Dawson, Illinois. Toward the end of the Vietnam War, he was a member of the U.S. Air Force stationed in England. His horizons were widened by the experience and he returned home with a passion to live a life less ordinary.

At Southern Illinois University Carbondale Sam studied film, his first love. He later became part of the annual King Richard's Faire in Wisconsin, living on the grounds with the rest of the workers and merchants. Many with King Richard's would migrate to other fairs, and Sam drove a vehicle shaped like a giant swan through the mountains as the caravan traveled to the eastern part of the country. It was there that Sam slogged through cranberry bogs as part of a nighttime search party, tracking the magician's missing civet cat in a race to find it before the local hunters.

We were both students at Sangamon State University, now the University of Illinois Springfield, when we met. He had returned to school to earn a master's degree in English and was a prolific poet. Sam could also capture candid photos of people. His eye was the camera's eye, and it was a perspective he incorporated into his poetry and painting.

He enjoyed music, and every Saturday we threw together an eclectic playlist for our Sam & Danz at Dawn radio show. The biggest joy we shared was attending pop culture conventions. Sam loved talking to actors, artists and musicians, learning about their passions and inviting them to be guests on WQNA's Fly Over Zone.

Although Sam had a curmudgeonly exterior, he was a deeply caring soul who found his work with Brother James Court residents rewarding. His unassuming manner and his genuine interest in people let this wandering star make lasting friends.

His large group of family and far-flung friends cannot believe we won't see him again.