Holidays are over. Let's eat plants. 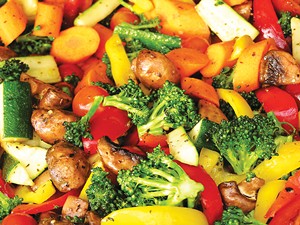 I've been accused of being a bit of a Scrooge whenever I climb onto my soapbox and pontificate about the evils of sugary holiday treats. I promised my wife that over the holidays I would stop telling the grandkids that every sugar cookie or piece of candy they consume brings them one step closer to developing juvenile diabetes and just let them enjoy the magic of Christmas. (Full disclosure: I allowed myself to indulge in one cup of brandied eggnog and a couple of pieces of my toffee. And a not-so-tiny wedge of Stilton Blue cheese with a couple glasses of port.)

But the holidays are behind us and now I am ready for a period of atonement. For the next several weeks the meat and sweet-centric menus of the holiday season will give way to a diet of predominately root- and leaf-centric winter salads. I'm not talking about a plate of lettuce topped with a few cherry tomatoes and some bottled dressing, but rather hearty, flavorful, crunchy, nutrient-dense plant-based complete meals.

These are some of the dishes I'll be making during the month of January.

Peel squash, cut in half, and remove seeds. Cut into one-inch cubes and place in a large bowl with sage, garlic and 4 tablespoons of olive oil. Season with salt and pepper and mix well. Roast for 30-35 minutes, stirring occasionally, until squash is tender and lightly browned.

In a skillet over medium-high heat melt butter with remaining tablespoon of olive oil. Sauté the mushrooms until they have cooked through and their moisture has evaporated, about 5-10 minutes. Season with salt and pepper.

In a small bowl or jar combine mustard and balsamic vinegar. Whisk in olive oil. Season with salt and pepper.

In a large bowl combine the squash and mushrooms with the arugula and cheese. Add enough dressing to coat and gently toss together.

Leaves from 1 bunch of flat-leaf parsley, rinsed and dried

*Place into a bowl over water with a little apple cider vinegar to keep from discoloring.

In a blender, purée 1 1⁄2 teaspoons salt with lemon juice, mayonnaise, maple syrup and jalapeno. With the motor running, slowly drizzle in the olive oil until it emulsifies.

Scrape dressing into a large bowl and add the celery root, apples, parsley, tarragon and lemon zest. Toss to combine and season with salt and pepper.

4 medium beets with tops and stems

For the quinoa salad:

Wash the beet tops well and separate the stem from the leaves. Reserve the leaves. Slice the stems crosswise into a small dice, and set aside.

Preheat the oven to 350 degrees.

Place the beet roots in a shallow roasting pan. Add a ¼-inch of water. Drizzle the beets with olive oil and vinegar and season with salt and pepper

Cover pan tightly with foil. Roast the beets until tender, about 45-60 minutes. Let the beets cool slightly and peel.

Combine the quinoa and vegetable stock in a saucepan and bring to a boil. Reduce heat and simmer 15-20 minutes until liquid is absorbed. Season with salt and pepper and set aside.

Peel the roasted beets, slice into bite-sized pieces, and set aside.

Add the sautéed greens and stems into the quinoa and mix well. Taste and season with salt and pepper. Divide the quinoa salad into 4 serving bowls.

Top the quinoa salad with the beet roots and top with the crumbled cheese.


An ironic footnote: While Dr. Peter is trying to adhere to a predominately plant-based diet for the month of January, he has 60 pounds of world-famous Benton bacon taking up half of his refrigerator. When his boss at the restaurant said that he could order Benton bacon from one of their suppliers, Peter asked him to order six packages, assuming they were one-pounders. When the order came in, to his shock and dismay, he discovered that he had received six restaurant-sized 10-pound packages at the wholesale cost of $480.

For something different, Cassoulet