Round up the music 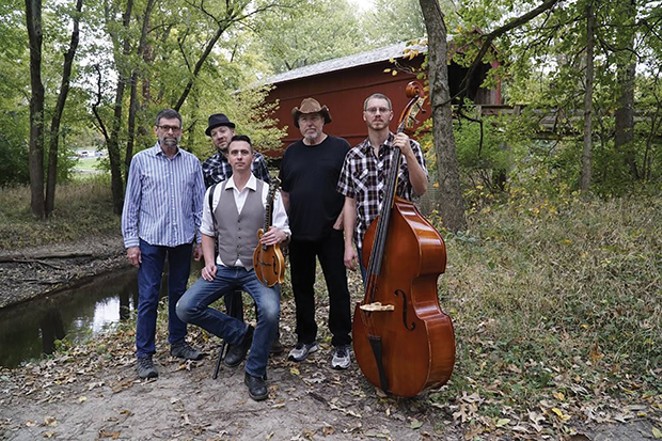 Square of the Roots play on Sunday afternoon at 1pm during the Joe & Jerry Tribute hosted by Penny Lane and Perfunctory This Band at Douglas Park.

The first full weekend of September gets us going into the fall mode and mood with an array of outdoor festivals featuring live music, including an Oktoberfest, an Art Spectacular, a Family FunFest, a Traditional Music Fest and a Joe & Jerry Tribute, along with our usual suspects at local venues.

On Saturday from 12:30-10:30 p.m., this September Oktoberfest (sometimes it’s good to get a jump on things) is the second year for the gala hosted by the Knights of Columbus 364 Hall out on Meadowbrook Road and Iles Avenue. Building on last year’s success, the fest, like a good Oktoberfest should, features primarily German beer, food and music. The bands are top-notch real German polka and waltz combos, including the world-famous and Chicago-based Eddie Korosa & his Boys from Illinois, the German Heidelberg Band from Quincy, and Joe Polach & the St. Louis Express out of the Lou. Go get your Deutschland on!

The Art Spectacular happens during the afternoon in the Washington Park Botanical Garden near the magnificent Thomas Rees Memorial Carillon on Saturday and Sunday. Along with an original juried art and crafts fair are children’s programs in the kid’s place, plus glorious songs played on one of the finest carillons in the world in between marvelous music by various local musicians. So spend some time with the grass and the trees and the birds and the bees as well as music and art for a fun afternoon frolic.

A first-time offering for 2018, the Downtown Springfield Family FunFest is a self-describing event, occurring on the north side of the Old State Capitol Plaza on Washington Street. Formally a fundraiser for the Prevent Child Abuse organization, this fest is geared strictly toward kids and families, with dance groups, zoo animals, bouncy houses and all that kind of stuff. For the live music part, popular kids’ educators and entertainers Tater Tots Rock perform at 2 p.m. and local hit cover band Fun DMC comes on at 4:05 p.m. with all kinds of fun acts in between. Come have a good time to help a good cause.

Lincoln’s New Salem State Historic Site near Petersburg hosts the annual Traditional Music Festival this weekend. On Friday and Saturday nights from 6 to 10 p.m. nationally touring bluegrass bands play in Kelso Hollow on the Theatre in the Park stage. Then, during the day on Saturday and Sunday, folk musicians gather in the historic village on an assortment of instruments for impromptu jams. Clogging aficionados can cluster at noon Sunday near the village entrance for clog dancing.

Sunday takes us to the 24th annual Jerry Garcia Tribute Party in Douglas Park with live music in the bandshell from 1 to 9 p.m. Also known as the Joe & Jerry Fest in honor of Joe Utterback, a founding father of Penny Lane Gifts, you can rest assured that tie-dye apparel will be in fashion, along with dancing in the grass, patchouli fragrance in the air, and other lovely things associated with the peace and love vibe of the Grateful Dead and 60s hippie movement that won’t be going away anytime soon. On the Saturday night before the fest, Perfunctory This Band, host and headliner for the Sunday party, stage a Perfunctory Family Reunion at the Butternut Hut as an annual get-together and fundraiser for the event. Please sally forth into the realm of decency and goodness where folks will understand where you’re coming from, even if you don’t know where you’re going or where you’ve been.