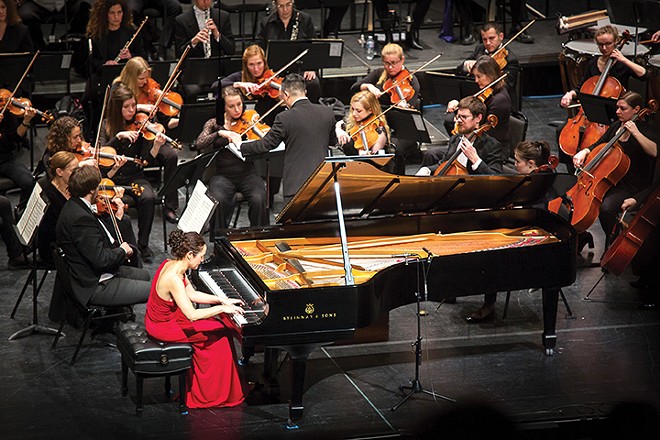 
The Illinois Symphony Orchestra returned to the UIS Performing Arts Center Saturday, Feb. 15, with a spirited Valentine's Day-themed program entitled "Love Notes." Things got underway with an enthusiastic performance of Richard Strauss's 17-minute tone poem "Don Juan" (1888), introduced in amusing fashion by ISO music director Ken Lam, who illustrated each stage of the titular Spanish seducer's journey – from boisterous womanizing to the throes of true love and eventual consignment to the fires of Hades – with brief demonstrations of the piece's major themes from ISO musicians. Lam's rapport with the musicians and the audience were on full display and the piece, which Lam described, not inaccurately, as a "bit of a sonic overload" more than lived up to its extended introduction.


The musical romanticism continued with a suite of excerpts from Tchaikovsky's crowd-pleasing ballet, "Swan Lake" (1877). Lam's enthusiasm was palpable during the performance. He occasionally did little dances while conducting the orchestra through some of the more rhythmic sections. Tchaikovsky's sumptuous, recognizable melodies came to life, with all onstage clearly enjoying themselves.


Lam described Rachmaninoff's 1909 "Piano Concerto No. 3" – the focal point of the second half of "Love Notes" – as a sort of Mount Everest for pianists. It was certainly an effective showcase for the evening's special guest, Taiwan-born piano virtuoso Sandra Wright Shen, a world-renowned soloist whose debut compact disc featured a performance of the epic composition. Program notes for Saturday's concert described the concerto as "famously difficult...requiring incredible skill and stamina from the pianist, and no less work for the conductor and the orchestra." Shen and the ISO proved themselves more than up to the task, with an execution ranging from delicate and gorgeous keyboard work to dazzlingly bombastic passages with the orchestra flexing its considerable sonic muscle.


Following an appreciative standing ovation for the Rachmaninoff piece, Shen returned to the stage for a brief, beautiful performance of Schumann's "Romance Op. 28 No 2 in F Sharp Major," which the composer had dedicated to his wife, Clara – an appropriate finish for a romantic and musically bountiful evening.


The ISO will return on Saturday, March 21, with "Spring Celebration," featuring more Schumann and Strauss as well as a Dvorak violin concerto to be led by reputedly "badass" (per culturemap.com) Israeli guest soloist Itamar Zorman.