"Being Blago" highlights his post-prison life 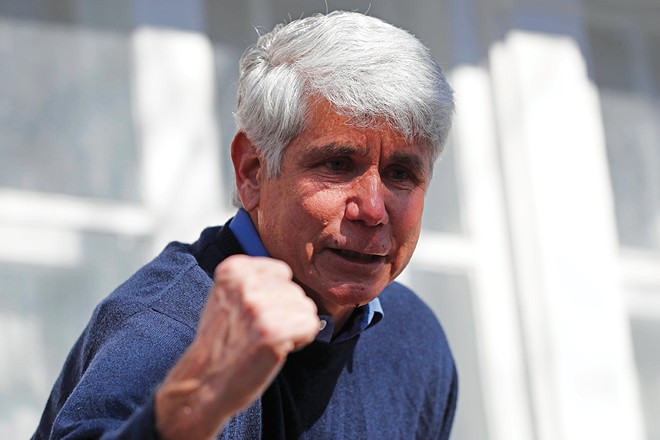 They defied the odds and stayed married.

When a married man enters prison, he almost always leaves it alone, particularly when he serves a lengthy sentence.

But Rod and Patti Blagojevich held it together, not just through his almost eight years in prison but through two federal trials, seven elections, a years-long feud between Rod and his in-laws and an impeachment.

Any one of these things would strain a marriage, but add them all together and it's remarkable any marriage would survive – yet alone one where neither spouse has a reputation for having a forgiving nature.

The former governor said Las Vegas oddsmakers were laying 9 to 1 odds that they would divorce before he was a free man.

Turn on Hulu and tune into the miniseries, "Being Blago," and you'll see Patti sitting on a park bench talking about the circumstances where she would walk away from her husband. If he enters politics again, she's gone.

I covered Blagojevich for a chain of five newspapers from the beginning of his first gubernatorial bid to the final vote removing him from office. At times he could be downright mean.

So, when I saw the four-part miniseries on Hulu, I wasn't prepared to like it. Instead, I found myself fascinated. Patti was introspective and candid, traits not on public display when she was first lady.

And Rod? Well, not much has changed there. I scheduled a half-hour interview with him and he talked for an hour and 15 minutes. And he was as combative as when he was in office.

In a nutshell, he says he never broke the law. Donald Trump, who shortened his sentence, is wonderful. JB Pritzker, Barack Obama and, most of all, Mike Madigan, are complete jerks.

More interesting was the insight the miniseries gave into his post-prison life. He's been selling birthday greetings and other video cameo appearances for $80 to $100 a pop. So far, he's done more than 2,500. (Do the math, that's more than $200,000 – greater than his annual salary as governor.)

In addition to his cameo appearances, he works for a trucking outfit based in Lyons, Illinois, which Blagojevich prefers to call a "logistics firm."

"Well, I'm a consultant and I work on what's called strategic development, helping to grow the business. The CDL 1,000 logistics company is a $75 million business right now and growing dramatically. ... I've actually been able to bring in a little business and more work for them."

The former governor declined to say how much he gets paid.

During the miniseries he said he did make mistakes. When I pressed him about those mistakes, he said that perhaps he had been too combative while in office.

But when I asked him if it had been a mistake to fire the wife of Mike Madigan's chief of staff from her state job or assign state-employed relatives of uncooperative lawmakers to empty rooms with nothing to do, he said he wished he had done more of that to bring reform to state government.

He expressed unrequited love for Springfield. He noted the only family vacation he took as a child was a day trip to see the Lincoln sites. And he said he loved running in Washington Park. But he said he and his wife's decision to raise their daughters in Chicago angered many in the capital city.

"It's fundamentally a Republican town. It ended up where I would do that parade before the State Fair every year, and I'd work the crowd, and you've got to have a thick skin because a lot of people were not very friendly."

He said he was harassed even during his daily run in Springfield.

"It's a beautiful Sunday morning and I'm running one direction, a young woman's running in the other direction. ... And, of course, I'm going to acknowledge the woman who's running. And I say, 'hello.' And she just starts yelling at me. It was amusing. I didn't take it personally. But when I would then turn around and come back, there was a house on my running route and they started putting signs on the lawn that would attack me. And sometimes it got to the point where they would celebrate the Cardinals beating the Cubs in a game because they knew I was a Cubs fan."

The house belonged to Jo Johnson, who was then the lawyer for the Senate Republican Caucus. She has always been a die-hard Cardinals fan and those signs had nothing to do with Blagojevich, she said. But she did start posting Republican signs to taunt him.

"I would get home from work and put the signs out and watch for him. ... And maybe I did yell at him. I stayed back on my porch, so that his security guards wouldn't get upset, but they were laughing their asses off. And I would just say, 'You're wrong. You're mean. You're horrible.'"

The signs became a frequent talking point for the governor when he met with legislative leaders.

Upon learning that "Being Blago" was No. 2 on Hulu's charts, Johnson said, "God, people are idiots."