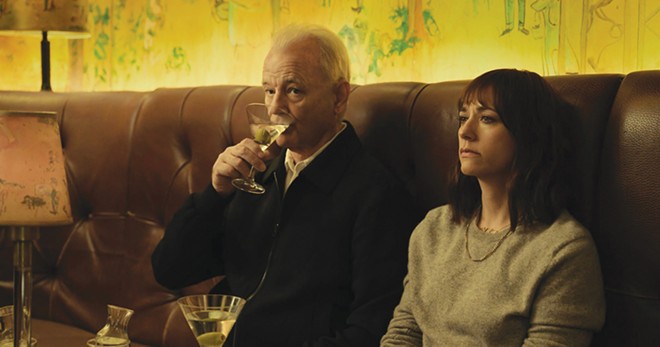 I'd be hard pressed to think of another film where a director had fashioned a part so attuned to the strengths, stylings and idiosyncrasies of one performer as is the case in Sofia Coppola's On the Rocks. A star vehicle if there ever was one, The Bill Murray Show would not be an inaccurate alternate title as it features the comedian in a tailor-made role that allows the performer to revel in all of his glory. Charming, witty, disarming and relaxed, the retired art dealer Felix fits the actor like a second skin, so it's no wonder his turn proves to be the saving grace in this Woody Allen knock-off that is not without its charms.

Big Apple author Laura (Rashida Jones) has it all. Two beautiful daughters, trendy digs in Soho, a big advance to write her first novel and a loving, successful, supportive husband in Dean (Marlon Wayans), who happens to be away from his family a great deal due to work. If it's not late nights, its sudden trips out of town or impromptu phone calls that take up his time, so much so that Laura begins to think he's straying.

She makes the mistake of mentioning this to her father, Felix, who had his own problems remaining faithful, his divorce from Laura's mother causing deep pain she's never truly given voice to. Comparing Dean's behavior to that of his past misdeeds, Felix soon determines his son-in-law is cheating and convinces his daughter to accompany him on various stakeout missions, most taking place in various parts of Manhattan, one being an impromptu trip to Mexico.

Coppola does a wonderful job capturing the magic of New York City, albeit the one where the upper 1% and those about to enter that rarified air live. It's a mystical place of privilege where sending your kids to private school is the norm, attending art openings is a weekly affair and being able to drop everything to jet to a foreign land with your father to see if your husband is being unfaithful is not out of the ordinary. And while this casts a veneer over the proceedings that seems particularly nettlesome at this particular moment, Coppola's sharp writing and her star's charisma ultimately trump any concerns the viewer may have regarding this representation of the cultural divide.

To be sure, this is Murray's show, as he's given full rein in each scene he's in to be...well, Bill Murray. There's no separating the actor from the character as we see him employ his trademark wit and deadpan delivery to charm former clients, woo strangers or, in the film's best scene, talk his way out of a traffic stop by telling warm anecdotes about one officer's father whom he just happens to know. It's that kind of movie, and you just go with the conceit so that we might step back and revel in all things Murray.

To Coppola's credit, there's a subtext at play here that reveals itself in the third act which lends an unexpected poignancy to the film. Sly like a fox, Felix has had an ulterior motive where these madcap escapades with his daughter are concerned, his intent not so much to catch his son-in-law red-handed but to provide context for his own past indiscretions. The revelatory heart-to-heart that ensues finds Jones and Murray at their best, as they let all pretense fall away and get to the heart of the matter. Rocks' comedic moments may drive the film, but it's the love and healing between Laura and Felix that makes it tick.