Road to recovery leads to becoming a rabbi 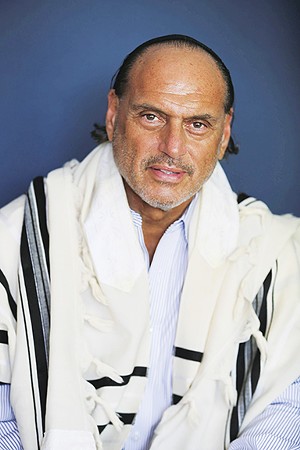 Arthur Stern's first full-time position as a rabbi is at Temple Israel in Springfield. For Stern, it's a major shift in his profession. And for the faith center, it symbolizes a shift in philosophy.

Stern draws from a storied past when it comes to his approach to religion. About 30 years ago, at the age of 32, he got sober after years of fast living and hard drugs. "I was a functional drug addict and alcoholic for many years," said Stern. "There's tons of functional alcoholics and drug addicts out there who go to work every day and have careers ... and that was certainly me. Then it escalated to a point where my whole life was collapsing."

Stern's road to recovery involved being let go from a high-profile job for an insurance company. It was the kind of job that came with fancy company cars and big paychecks. But he ended up living in a homeless shelter and attending Alcoholics Anonymous meetings.

"AA led me back to Judaism, because I had really lost touch with God," said Stern. "When I got sober I got a very solid spiritual foundation." Stern started going back to synagogue and praying again. He learned to talk with God in his own language. "I don't think the voice of God ... ever would have come in and said, 'Go be a rabbi,' if I hadn't done all that work."

In an unofficial way, Stern's ministry began at the homeless shelter in Minneapolis where he stayed, and where he also began to work. He would help at mealtimes, and saw the heart-rending situations others were in. It was a testament to the plight many go through because of addiction and mental illness, which Stern said are often linked. Seeing parents line up with children every day was particularly hard. "I used to grab ice cream bars and bring them to the kids at their tables and sit and talk to them."

Stern was born in the "Orthodox Jewish section of the Bronx" – as he described it – and was raised in Connecticut before his time in Minnesota. He's now in California, pending a permanent move to Springfield. After 10 months in the homeless shelter three decades ago, Stern worked for a rehab facility, and then continued a successful career in insurance. He also did a lot of studying, and has a dizzying list of degrees. The most recent one is from the Academy of Jewish Religion at the University of California, Los Angeles. He was ordained this past spring.

Stern also holds a doctorate in psychology, and a master's degree in spiritual psychology. Spiritual psychology practitioners believe, "Everybody already has all the answers they need inside of them, sometimes they just need a little guidance getting there," Stern said. He said it provides a more intuitive and holistic approach than traditional psychology.

Stern is also interested in an expansive approach to faith. He's eager to perform interfaith ceremonies, such as weddings, for those who request them. His appointment signifies a shift at Temple Israel away from the conservative tradition. Stern said one thing that attracted him to Springfield was the temple looking to transition into an unaffiliated, nondenominational status, a change he considers important "in order to resonate for the future in Judaism."

"If I can help light a fire inside of somebody to be a little more spiritual and a little bit more Jewish today than they were yesterday, then we're moving in the right direction," said Stern, who said the welcoming and warm nature of those affiliated with the congregation was another sign he is on the right path.

Of course this change comes with a transition for Rabbi Emeritus Barry Marks, who retired in June after nearly five decades at Temple Israel. He's been mentoring Stern. Like Stern, Marks had relocated to the Midwest from a coastal area for his first rabbinical position. He had first gone to Danville after graduating from school in New York. "When we graduated, they wanted us to take pulpits at small congregations that could not otherwise engage a rabbi," said Marks.

Marks was a co-founder of the Greater Springfield Interfaith Association, formed in 1978. Marks said he hopes his legacy includes a "passion for learning" about the heritage of Judaism, as well as a strong sense of community. He and his wife, Nancy Sage, are lifelong members of the congregation. Marks said while they'll continue to reside in Springfield, he hopes to spend more time traveling.

Stern has been doing a lot of that himself lately as he works toward settling down in Springfield. He'll be spending much of September here, for holy days which he will conduct via Zoom from the synagogue. One of the new traditions he hopes to impart is monthly tellings of "hashkafa stories" – stories where the hand of God has touched conregants' lives. "It happens all the time if we just keep our eyes open and we're paying attention," said Stern. "I think everything happens for a reason."