Riding a train to country-music fame 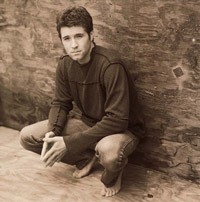 From seemingly out of nowhere, he comes. He lands on the stage of the Grand Ole Opry and receives an encore for his first performance. A song is released to the nation's country music radio stations and he finds himself on the charts sandwiched between heavyweights Toby Keith, Kenny Chesney, and Alan Jackson. Now he is on the road (not again -- yet), playing to the masses. Who is this mysterious man? Call him Kid Country, a.k.a. Josh Turner, 26-year-old singing, songwriting sensation of the neo-hillbilly world. His smash hit single, "Long Black Train," was inspired by listening to the Hank Williams CD-box set one night during his college days in Nashville.

Turner compares the writing of the song to a revelation received by an Old Testament prophet. "It was unusually dark. About halfway home, I had this vision of this wide-open space with this train track coming down the middle and out of the darkness came this long black, dark shiny train. I could see people standing on the side watching the train go by. I asked myself, what was this vision of people standing by. I knew this was a metaphor of temptation. It was really powerful," he recounts. "That night I got home. I got my guitar out. I sat down on the bed, and the song just poured out of me." However the tune was procured, it has propelled his career from a kid's fantasy into a full-blown adult reality.

Just to let you know how these overnight sensations occur, the Grand Ole Opry show was on Dec. 21, 2001. In 2002, Turner was signed to MCA records and work began with producers Mark Wright and Frank Rogers on a full album. The record was released in October and "Long Black Train" received a certified gold status (sales of 500,000 copies) by the end of 2003. The success of the single has got Turner out on the road as MCA prepares another song off the CD for radio airplay. Kid Country is out to rock the world.

Josh Turner will perform "Long Black Train" and other songs from his MCA debut at Nashville North in Taylorville at 6 p.m. Sunday, March 21. Tickets are $23.50 and available by calling 287-2103 or visiting Nashville North USA's Web site at www.nvnusa.com.