Gem of the Ocean, by August Wilson, indispensable America playwright 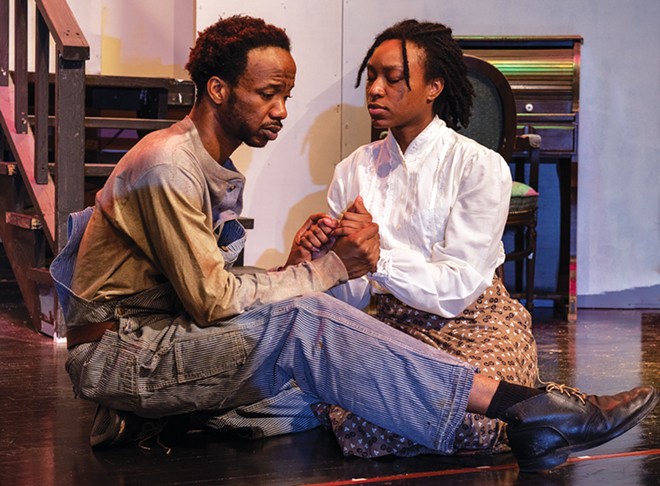 Photo credit Matt Franklin.
Reggie Guyton as Citizen Barlow, who carries a burden of great guilt, is comforted by Mariah L. Brooks as Black Mary in the Springfield Theatre Centre’s production of August Wilson’s Gem of the Ocean. Guyton also directs the show, one part of Wilson’s extraordinary cycle of 10 plays addressing the African American experience over the course of an entire century.

The late August Wilson (1945-2005) remains one of America's most important playwrights, leaving behind enormously entertaining work that is a triumph of history and theatricality.

The Springfield Theatre Centre's production of Wilson's Gem of the Ocean at the Hoogland – directed by Reggie Guyton – is a major event, a must-see for anyone who cares about the theater and about our troubled nation and community.

Wilson's ambitious and extraordinary project was 10 plays, called the Century Cycle, chronicling the African American experience in the 20th century, written between 1982 and 2005. They were set in the working-class Pittsburgh neighborhood where he grew up. Gem of the Ocean is chronologically the first. Successful as individual plays, winning Tony Awards and Pulitzer Prizes, the opus is a massive poem addressing the struggles and the strength of family, the uniqueness of Black culture, and the fight to value and preserve it.

Wilson often said he didn't write for Black or white audiences but about the life experience itself. "And contained within that human experience are universalities," he told the Paris Review. "You create the work to add to the artistic storehouse of the world, to exalt and celebrate a common humanity."

Wilson said his credo was to "Confront the dark parts of yourself, and work to banish them with illumination and forgiveness. Your willingness to wrestle with your demons will cause your angels to sing."

Like all great art, Gem of the Ocean shows us ourselves – no matter who we are.

Gem is set in 1904 when slavery was still a living memory. Hope lives in the home of Aunt Ester ("an-cestor"), 285 years old and survivor of the horrors of the slave ships. Her house is a refuge and portal, a place of wisdom and strength. She uses her conjurer's gift to heal the soul-sick Citizen Barlow, who feels the death of another weighing on his heart.

Guyton, a performer at the Abraham Lincoln Presidential Museum and a well-regarded director (His production of the musical Memphis was a triumph.) both directs and plays Citizen. "Gem is a hopeful and beautiful story about an 'everyman' with the odds against him," Guyton told us. "In the play, he really does get his soul washed, redeemed by becoming one with the community. Audiences will appreciate the reality of the period, but see that no matter how much has changed, many underlying issues remain, although seen from a different perspective."

Other characters include a former guide on the Underground Railroad, Ester's assistants, and as antagonist, a self-made entrepreneur and constable who plays, cynically and self-importantly, by the white man's rules.

In the theatrical climax, a ritual rebirth, Aunt Ester places Citizen aboard the slave ship named "Gem of the Ocean" to relive the ancestors' suffering and visit the legendary City of Bones at the bottom of the Atlantic, where the souls of those lost on the dreaded Middle Passage reside.

"I love scenes with texture and layers and nuance," Guyton told us. "And you get all of that in August Wilson's work, which is both straightforward and concrete and also abstract and celebratory."

Vincent Chappelle plays Eli, who has a key role in this scene. "That redemption moment is definitely going to be a tearjerker," Chappelle said. "It will break your heart but make you think about your life, the lives of people you care for, our journey through the world, and the journey of our ancestors. We learn we can get through with guidance and community. And humor along the way helps."

"This show is a big deal," Guyton says. "It's not often you get to see a show this complex and rich about the Black experience – and during Black History Month. There's a lot to dissect, so we scheduled a talkback session after the show on Sunday, Feb. 20, with Tiffani Sanders as moderator."

Audiences will have the unusual chance of seeing this accomplished theater artist tackle similar themes in back-to-back shows. Guyton will be staging the musical Ragtime at the Muni this summer. Ragtime is set in the same period as Gem and also examines the American experience, including the place of African Americans.

Guyton sees his work on Gem and Ragtime as a continuation of his work at the museum. "All the work is entertaining, but deals with serious issues, as much spiritual as political. How do we live life? How do we build and preserve a community? And it's about memory. Reminding us that history is not just in the past. It's still affecting all of us every day."

Grasp this rare opportunity to see the fascinating Gem of the Ocean. You will find it revelatory, cathartic, hilarious – and you will thank yourself for going.