The glorious Dana-Thomas House – built in 1904 by Frank Lloyd Wright for Susan Lawrence Dana, owned by the Thomas Publishing company for over 30 years, purchased by the state in 1981, and restored painstakingly in the 1980s – will be open for special behind-the-scenes restoration tours on third Saturdays, April through July.

The tour guide will be Michael Jackson, preservation architect for the Illinois Historic Preservation Agency during the 1987-1990 restoration.

Jackson applauds the Thomas family for “being stewards of the house.” They made only minor changes – added lighting, painted the walls white and removed the deteriorating exterior frieze. “They left us an incredible gift.”

The restoration occurred in two stages: the initial Historical Structure Report (HSR) analysis which took three years, and the actual restoration from 1987-1990.

Wilbert Hasbrouck, Chicago architect, was chosen for his extensive preservation work and knowledge of Wright. (Hasbrouck, who just died in February, published the Prairie Review Magazine from 1964-1981.)

Jackson explains: “We had to review what the house looked like in certain years, choose a specific date and then restore the house to that look.” Teams of experts pieced together a puzzle.

Photos from 1911 by Ernest Wasmuth helped. These showed placement of furniture, rugs, draperies and decorative items. (See the Wasmuth photos alongside current photographs taken by Doug Carr at http://www.dana-thomas.org/photogallery.)

Color photo by Doug Carr
The Dana Thomas House at Fourth and Lawrence as it looked in 1911 (left) and today.
But, since the photos were in black and white, Jackson says, “We had to do detective work to figure out colors.” Paint samples were taken – from behind light fixtures and inside closets.

At the front door there was once an iron gate, which Dana had removed by 1910.

Piecing all of the analysis together, the team chose 1910 as the restoration date; then the actual restoration began. Every surface of the house – walls, woodwork, windows, exterior – was restored.

“The white walls were stripped to the bare plaster. We determined that the original walls had a mottled look which we created by using an undercolor application with an overglaze,” Jackson said. Wright used several colors and there are now two colors in each room.

The woodwork that had darkened over time was stripped. A reddish stain was found on an unexposed piece of woodwork. “We determined that not only was the woodwork this reddish color but also the furniture that Frank Lloyd Wright designed. All the furniture was then restored.” According to Jackson, the furniture restoration created controversy when some said these original pieces had become antiques and should be left alone. “But the integrity of the house was needed,” Jackson says, “and so to create the look of 1910 meant refinishing the furniture.” Only the music cabinet in the gallery, with its light oak finish, was not restored so visitors can compare it to the other 100-plus pieces of Wright-designed furniture.

Storm windows had to be installed to protect the interior while the Melotte-Morse studio removed and restored the original art glass windows.

The exterior looks like stone, but it is concrete. “Concrete was new in 1903 and so Wright used a new material when he designed this house.” Refinishing the exterior was “messy, dirty work” says Jackson, “because the original tuckpointing had been filled in and all had to be cut out.” Making a new frieze was possible after the original cast was found in storage; the greenish color was achieved by layering paints to match the patina of the original copper eaves and gutters. 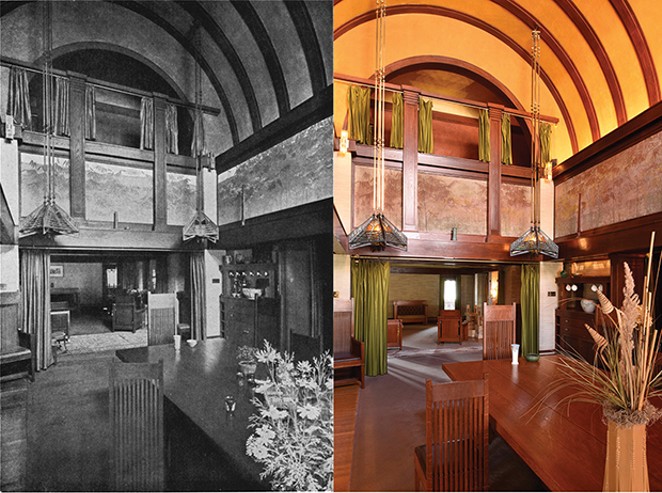 Color photo by Doug Carr
A view of the dining room with the table fully extended and showing the barrel vaulted ceiling and the gallery where musicians often played during Susan Lawrence Dana’s many parties. Left: The same view in 1911.
Amazingly, the architects discovered only one serious structural issue. On the first floor is a library; above it is the gallery. The beams in the library ceiling had sagged and couldn’t support the upstairs gallery. “The [replacement] steel beams were so large we had to roll them in from the front porch,” Jackson explains.

New fabrics and carpets were selected to be as close to the originals as possible. There once had been an outdoor walkway with a section of thick glass serving as a skylight for a dark basement area. Over time the walkway had been covered over with concrete; that was removed and the glass was remolded and replaced.

Every detail had to be considered. Even though the stove in the kitchen and a bathtub aren’t original, they are from the time period. Jackson found a tub in a Minnesota salvage shop.

“Frank Lloyd Wright used a level of thought to connect spaces and people,” Jackson said, and his sumac design throughout the house is “a masterpiece in American decorative arts.” The butterfly design in the Victorian parlor’s fireplace also connects to other parts of the house. “Susan wanted this room left as is, and Wright designed around it, but he used the butterfly design over the entryway to the house,” Jackson explains.

To restore such a large space –12,600 square feet over 16 levels – took hundreds of laborers and hundreds of hours. But today Springfield is known for having one of the most intact buildings designed by Frank Lloyd Wright.

Cinda Ackerman Klickna loves the Dana-Thomas House. While she was writing this article, she was sad to hear of the passing of Wilbert Hasbrouck, the Chicago preservation architect.