Bringing brick streets back from the grave 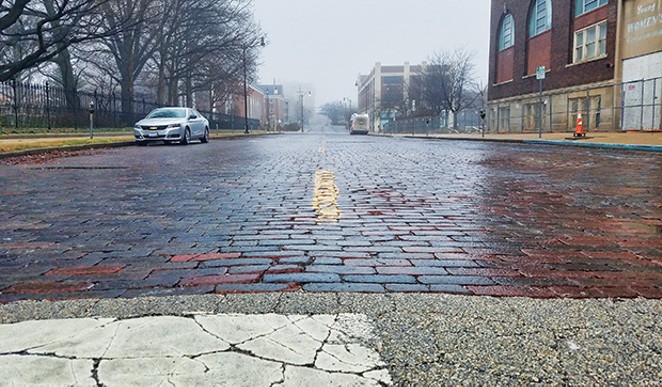 PHOTO BY DAVID HINE
The brick section of Jackson Street between Fourth and Fifth streets.
Springfield has no yellow brick roads leading toward Oz – I know because I looked for one for 40 years. It used to have plenty of red brick ones, though, gorgeous streets the color of aged wine.

Bloomington is thought to have been the first Illinois town to pave streets in brick, in 1877. As usual, Springfield lagged in taking up this innovation. In 1892, the editors of the old Illinois State Journal noted that visitors to Springfield “complain greatly of our rough streets, and this information given abroad is more or less a reflection on Springfield’s ‘up-to-dateness.’” All other street-building materials having been tried without success, they wrote, “brick now seems to be the only hope. . . . It would be wise for our new city council to cover themselves with glory by having some of streets of this city covered with brick.”

Presumably the city government did a better job covering itself with glory than it did coverings its streets with bricks. Pavers were made from shale rather than ordinary brick clays, then fired twice or vitrified at higher temperatures than building bricks. The material is capable of resisting decades of wear by iron-rimmed wagon wheels. A properly laid street made of bodacious brick can last 150 years or more. (The oldest state highway segment in Illinois, in Ogle County, was made of brick in 1915, and it is still in use today.) But by World War I Springfield’s bricked streets had already become worn out or uneven. The press speculated that City of Springfield employees responsible for overseeing their construction had signed off on inferior materials or work by contractors.

What I recall as the Great Repaving began in the 1960s when residents desiring smoother and quieter streets demanded that theirs be covered with asphalt. There are those who believe that this was a massive blunder. Rainwater seeps down through brick streets instead of running off to overwhelm storm sewers. The surface demands that drivers slow down, which not only reduces accidents but reduces the severity of the accidents that do happen. When the substrate fails they’re hard on cars. but you can bust a strut on a potholed asphalt street too. They’re expensive to repair properly, but they last longer too. So they’re cheaper in the long run.

Yes, but city councils don’t think about the long run. Bloomington has fewer than four miles of brick left. So does Urbana. Champaign has some eight miles left. Springfield, as I understand it, still has about a dozen miles of brick streets, such as Jackson between Fourth and Fifth or Lincoln between South Grand and Laurel.

In fact, Springfield has many more than 12 miles of brick streets. They’re still there, under the asphalt. Among the manifold absurdities of converting Capitol Avenue between 19th and Second streets into a prairie Pennsylvania Avenue was giving the street a new old-brick surface, because brick streets just say, “tourist site.” That reach of Capitol was a majestic river of brick, a veritable Mississippi into the 1960s at least, when it was asphalted. That original pavement reportedly was torn out and, inexplicably, landfilled. (Owners of salvage companies put their kids through schools on what they make selling old street pavers.) As a result, the contractors spent millions to install an imitation historic street to replace the real historic street that was thrown away in order to install the imitation.

Did I say that it was Rod Blagojevich’s idea?

A few years ago Bloomington adopted a Brick Streets Strategic Plan to preserve that city’s three and a half miles of brick streets; “The longevity of Bloomington’s remaining brick streets attest to their durability and economic value,” declared the city. “Though costly to install and patch properly, these streets last for generations and add significant beauty and history to the area.” Rockford also has an ordinance to preserve and protect its brick streets. A few miles down I-74, in Urbana, the city council decided 30 years ago that brick streets were to remain brick streets.

In Springfield, the public works department has undertaken to fix extant brick streets when it has the money, but that is a matter of policy, not law. Rather than preserve brick streets, the city code demands that when contractors tear up 50 feet or more of brick street to do underground utility work, the brick is to be “replaced with Portland cement concrete.”

Some towns are not only protecting their surviving brick streets, but bringing old ones back from the grave. Brick streets are being disinterred, using what amounts to giant radiant heaters that soften the asphalt so it can be scraped off without disturbing the brick.  If only every dumb thing city councils do could be fixed so easily.