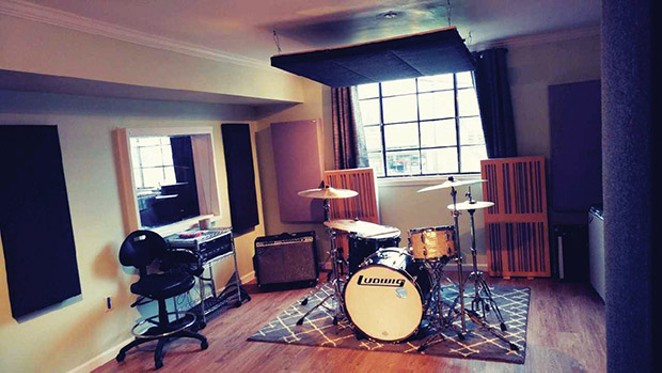 PHOTO COURTESY SOUTHTOWN SOUND
Where the magic happens inside the newly renovated Southtown Sound Studio.
“It’s a great day,” said B.J. Pearce, studio manger of Southtown Sound. “We really have a lot going on for us right now.” The newly renovated recording studio located in the building directly behind Dumb Records near the corner of 11th Street and South Grand Avenue had its grand opening on Sunday, March 26, concurrent with the Black Sheep Annual Art Show (See “Art at the Pharmacy and Black Sheep,” IT, March 30). “We’ve done some recording already,” Pearce explained, “but this is the first time we’ve been officially open to the public.”

Southtown Sound is in the same space once occupied by the defunct Southtown Studio, where longtime Springfield musician and polymath Brandon Carnes (Looming, Big Storm, Diaper Rash, Fuck Mountain, etc) both lived and worked before relocating to Pittsburgh, Pennsylvania, last year. Thanks to money raised during an $8,000 crowdfunding drive conducted via kickstarter.com, the surroundings are almost completely unrecognizable from Carnes’ time there. In fact, if not for the telltale view of the Black Sheep Café parking lot, Southtown Sound might pass for a completely different space. With crowdfunding dollars going to improvements such as drywall and insulation, wall and ceiling repairs, a slick new paint job and a newly installed floor, it’s no wonder.

In addition to Pearce, the new studio’s other two primary operators are senior audio engineer Kyle Noonan and journeyman engineer Mario Cannamela. All three young men have extensive and complementary experience performing and recording music. Their plan for Southtown Sound is to make it both a solid member of the Springfield music community and a destination for musicians from all over the map.

“We’ve had people from all over the area visiting today,” Pearce said during the grand opening. “People from Chicago and St. Louis. It’s exciting.” One of the premiums offered in exchange for donations was studio time, which will keep Southtown Sound busy for at least a couple of months. “Bands which donated to our Kickstarter received prepaid time in the studio as a premium,” Pearce explained. “We’ve also had a flood of bands, ranging from hip-hop to metal to jazz to folk, all trying to get their foot in the door and book time here.” There is an expectation that touring bands performing at Black Sheep Café will take the opportunity to record at Southtown Sound.

In fact, one of the studio’s first recording sessions was Looming, featuring Brandon Carnes. Looming was founded in Springfield and bred at the Black Sheep Café but now finds its members scattered all over the country. The locally popular band has been gaining fans nationally and will release its second album on California-based No Sleep Records later this year. When they passed through town on tour last month, they stopped off in the studio for a two-song live session.

Between decade-old music venue Black Sheep Café and venerable indoor skateboard ramp Skank Skates, along with specialty retail spaces Dumb Records and Boof City Skate Shop, the corner of 11th Street and South Grand Avenue has taken on the feel of a self-contained community, with its own sense of civic pride, something the founders of Southtown Sound are excited to be part of. “We hope the studio is going to reflect well on Southtown as its own little city within a city,” Pearce said.