Communal reading as tells a city’s story to itself 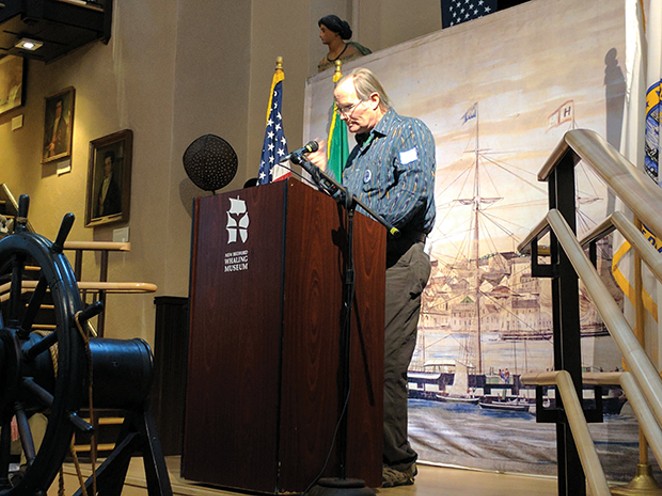 Unless we are blessed with snow, December hereabouts can be a grim month, which might have been one of the reasons that Vachel Lindsay decided to shuffle off this mortal coil on the fifth of that month back in 1931. Which melancholy reflection started a chain of thought that took me (mentally at least) to the famed whaling port of New Bedford, Massachusetts.

Every January, the whaling museum in New Bedford hosts a Moby-Dick Marathon, during which guest speakers and local volunteers take brief turns reading aloud every word of Herman Melville’s 1851 novel. The mass reading attracts fans of Melville, fans of whaling and patriotic New Bedfordians, who are spared the necessity of reading for themselves a novel that is more than 200,000 words long, rather a lot of which are about knots. Grown-up fun.

People reading together is not itself especially novel. On a cold February day in 2011, hundreds of Springfieldians gathered at the old depot on 10th Street to recite, in unison, Lincoln’s farewell to Springfield. The intention was not, as in the blab schools of old, for the reciters to learn the address, but to get themselves into the Guinness Book of World Records.

Such silliness was not edifying, although it did suggest to the rest of us why Lincoln might have wanted to leave town in the first place. (See “’A neat and appropriate address,’” Feb. 24, 2011.) The New Bedfordians began their gag as a promotion too, but it’s easy to see how communal readings might achieve higher ends, even if they are inadvertent to the noble purpose of museum promotion. Communal readings affirm the value of the work, but the experience of reading and listening to the work also binds the listeners to the work, to each other, and to the community which (in the case of the New Bedfordians) figures as a setting for both the work and the art. 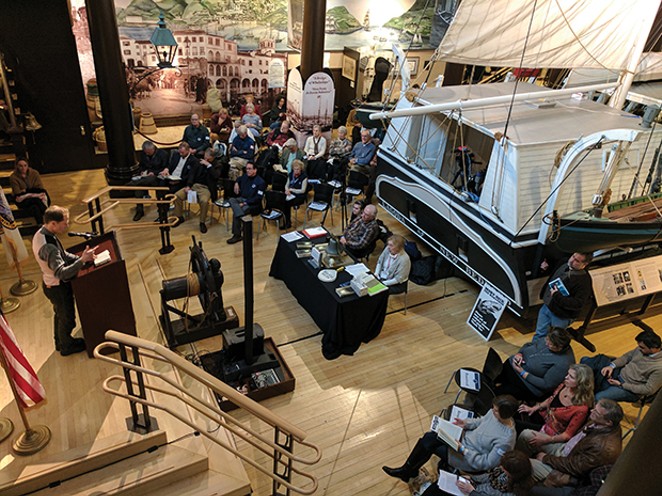 Photo courtesy New Bedford Whaling Museum
The Moby-Dick Marathon begins in the Whaling Museum’s Bourne Building next to Lagoda, a half-scale model of a 19thC whaleship.
Is there a book about the Springfield area that might make work such miracles? Lincoln’s letters seems a likely choice, as is the Autobiography of Peter Cartwright. So are the three chronicles of pioneer life (in Pike, Tazewell and Montgomery County) written by Burland, Farnham and Tillson, respectively; the last could be read at New Salem, assuming Ebenezer Rauner doesn’t sell it to a downmarket motel chain. Then there are curiosities such as Marshall Kirkman’s historical novel, The Romance of Gilbert Holmes (1901); young Holmes is on the run from villainy and danger in central Illinois during the 1830s and emerges unscathed from enough wrecks, attacks, murders and explosions to exhaust a comic book hero.

Or – and here we get back at last to Vachel Lindsay – Springfield might gather to read City of Discontent by Mark Harris, the fictionalized biography of the poet. Lindsay chased his own whale, in a manner of speaking, and like Ahab died in the chasing. Springfield was both the villain and lover in that strange story, which is not a history of Springfield or even of Lindsay, although it comes very much closer to the former than the latter.

Through the open window comes the Springfield smell, an odor Vachel has known nowhere but here, an unnamable and unidentifiable smell, the odor of no single thing, the compound of a hundred or a thousand objects. . . . It is an admixture which in a laboratory might be analyzed and found to be so much coal and so much corn and so much Brewery and so much railroad and thus and thus many people, proportionately, and nowhere but in the Springfield air are the proportions identical. . . . It assures him he is home again, and here he would like to remain and . . . walk among the people he knows and has always known, and stroll on Fifth Street and on Capitol Avenue, and stand by Willis and fight for a lake and public water, and stand by Duncan and fight for Duncan’s right to be heard.


I can easily imagine his townspeople gathering (at his house, perhaps) to make their own tramp through Harris’ book. It could be fun, and a way to meet people you didn’t suspect existed in Springfield, and learn about the artistic life and the progressive-era reformers whom he saw as civic saviors. Spaulding, Dallman, et al didn’t do all they wanted – reformers never do, which is why we keep needing them – but they did a lot, even in a Springfield that was in many ways more benighted than today’s. And that is something worth knowing.

When Christmas in Springfield was no big deal