About the article
This article is the product of a collaboration between Illinois Times and the Better Government Association. The BGA is an independent, nonpartisan and nonprofit government watchdog that specializes in investigative
reporting with media partners throughout the state. The BGA’s Rescuing Illinois Project is an ongoing series of in-depth reports examining state government and its impact on the public.

Governor Bruce Rauner’s bid to establish statewide “right-to-work zones,” one of the major initiatives of his emerging state economic development plan, could become a rallying cry in Illinois’ city halls and county seats. But it’s a long way from becoming a reality, a BGA Rescuing Illinois examination finds.

In calling for right-to-work zones, Rauner urges residents of municipalities or counties to vote on whether workers should be required to join a union and pay dues within selected borders.

Such districts will “empower” employers, giving them an incentive to open businesses or expand existing enterprises in economically depressed areas, Rauner contends.

Organized labor has the opposite viewpoint, describing Rauner’s plan as “right-to-work-for-less zones” and blatantly anti-union. Moreover, they argue the zones are unconstitutional and will run into significant legal barriers in Illinois, as they have in Kentucky, the one state where the zones have been tried.

“We would view this concept as being entirely illegal,” said Sean Stott, director of government affairs for the Laborers’ International Union. “We’re assuming the governor is going to be encouraging local governments to pass illegal ordinances, and we’ll be taking them to court...and we won’t be the only ones.”

Rauner’s tactics
Indeed, Rauner has a lot riding on these “right-to-work zones,” which mark his first significant step in a self-proclaimed public agenda to “shake up Springfield” while also improving Illinois’ economic prospects.

A focal point of his plan appears to be curtailing the power of organized labor in the private sector and also the public arena, where unions dominate much of state government’s workforce.

In his recent State of the State address, Rauner called the right-to-work or “employee empowerment zones” a “win-win-win proposal” that will “give employees the freedom to choose whether or not they want to join a union.”

Since Illinois with its heavily Democratic legislature is unlikely to pass a statewide right-to-work law, Rauner is embracing the concept of right-to-work zones that are being explored nationwide as a way to subvert state legislatures.

A week before the State of the State address, Rauner touted the idea in a speech in the union stronghold of Decatur. But it’s unclear how the Rauner Administration plans to advance its right-to-work zone agenda. Rauner’s office declined to comment for this story.

In Kentucky, where six counties have passed such legislation, Attorney General Jack Conway, a Democrat, issued an opinion on Dec. 18 that stated the measures violate federal law. Last month a group of labor unions sued regarding the ordinance passed in Hardin County, Kentucky.


Where would it happen?
Right-to-work zones could be popular with private or public employers in places with big unionized workforces, like the Caterpillar plants in Decatur and East Peoria or the College of DuPage in Glen Ellyn.

Experts note that there is little or no chance of right-to-work zones cropping up in Chicago. Although Republican Rauner and Democratic Mayor Rahm Emanuel are friendly, organized labor remains politically potent in Chicago and the mayor, who is locked in a runoff election against challenger Jesus “Chuy” Garcia, has gone on record as being opposed to “right-to-work” tactics.

The idea could however be popular in Republican-leaning suburbs or downstate municipalities and counties that are less beholden to labor.

Todd Maisch, president and CEO of the Illinois Chamber of Commerce, said Illinois border areas not far from right-to-work states – Indiana, Michigan, Iowa and Tennessee – would have particular competitive interest in instituting the zones.

Right-to-work zones might be proposed to cover industrial manufacturing centers, transportation hubs or public sector employment hotspots like colleges or prisons. Rauner has made much of his antipathy to public sector unions.

However, right-to-work zones for the public sector might become less relevant if the controversial executive order that Rauner announced on Feb. 9 survives expected legal challenges. That order would exempt public employees from paying their “fair share” of union dues, an amount they are currently required to pay even if they opt not to join a union.

While proponents, including Rauner, often describe right-to-work as allowing employees to choose not to join a union, it is in fact already illegal to force someone to join a union as a condition of employment. 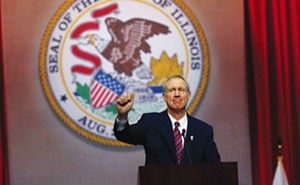 Jon Russell is director of ALEC’s program for cities and counties. Russell said that in Kentucky, where ALEC has advised leaders, the measures are meant to cover private sector workplaces like the General Motors Corvette plant in Warren County, the first in the country to pass such an ordinance.

Brent Yessin is a Florida attorney who started lobbying and nonprofit organizations promoting right-to-work zones. Proponents will be pushing the zones in Ohio and Pennsylvania, along with Illinois, he said.

“It is a grassroots locally driven process,” Yessin said. “It’s not a cookie-cutter approach. I can’t just take what I did in Kentucky and do it in Illinois. But still there are some lessons that are applicable. It’s a movement that will continue to grow.”


The argument for right-to-work
Proponents of right-to-work laws say they will attract new businesses since employers won’t have to deal with labor unions.

Unions can still organize in right-to-work areas, but since workers are not obligated to pay dues, there is little incentive for them to do so.

Kim Maisch, director of the Illinois chapter of the National Federation of Independent Business (NFIB), applauded Rauner for promoting right-to-work zones, calling it a “bold move.”

Todd Maisch said the Illinois Chamber of Commerce supports right-to-work laws, though they are not a high priority. His group is more focused on reforming workers compensation and tax policies. He said right-to-work laws could be advantageous to businesses, but the likelihood of legal opposition could be a big deterrent, especially for cash-strapped local bodies.

“Unfortunately it’s one of those issues where until the courts speak there’s no reason to get too far ahead of yourself,” he said.

“We’ve seen organized labor try to pass a lot of things via ordinance at the local level,” like minimum wage laws and responsible bidders ordinances; those issues are covered under different federal laws than union organizing.

“We find it ironic they oppose the other side utilizing that route,” she said.


The argument against right-to-work
Unions say that in right-to-work areas, wages, benefits and protections decrease as a result of lower union representation.

An August 2014 study by researchers at the University of Illinois and the Illinois Economic Policy Institute found that after controlling for other variables, right-to-work laws reduced workers’ wages and salaries by 3.2 percent on average.

They also found that right-to-work laws reduced the portion of workers with pension plans and health insurance by 3 and 3.5 percent, and reduced union membership by almost 10 percent.

“Workers suffer significant wage loss over time,” said study coauthor Robert Bruno, a professor of labor and employment relations at the University of Illinois. “They will lose thousands of dollars in income, their average wage will fall, fewer workers will have health care coverage and retirement benefits, the coverage they do have will be weakened.”

Ed Stuart, an economics professor at Northeastern Illinois University who has studied the issue, said there is little proof that right-to-work provisions create jobs.

“The bulk of the current research is that taxes and wage rates have literally nothing to do with economic development,” he said. “What drives regions and cities and states are the quality of life, the quality of schools, the education of the population and the amenities – parks, museums. Instead of trying to bring jobs and then people, you bring people and they create jobs.

Kari Lydersen is a Chicago-based author and freelance writer who writes about government and public policy issues for the Better Government Association and other media outlets.

Kari Lydersen, a regular contributor to AlterNet, also writes for the Washington Post and is an instructor for the Urban Youth International Journalism Program in Chicago.
Read More about Kari Lydersen