Rango, a dynamic tribute to westerns, a lost genre 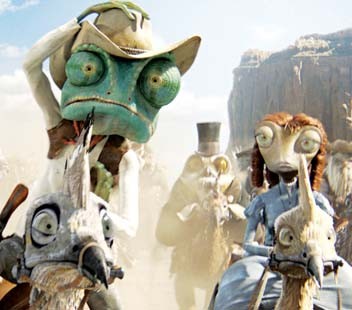 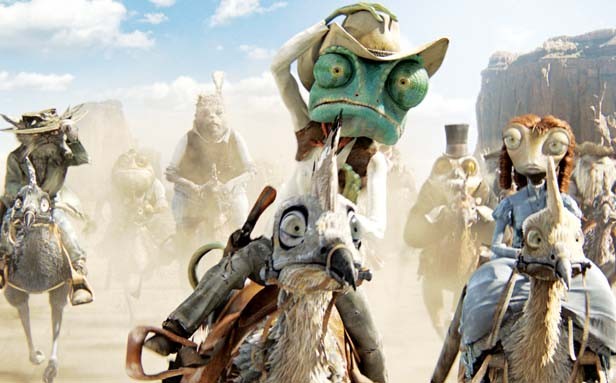 Johnny Depp stars as a chameleon with an identity crisis in Rango.

I’m not sure who the audience is for Gore Verbinksi’s Rango. The western has been out of vogue for so long that I don’t think kids, teens or that precious 20-32-year-old demographic know the difference between a six-shooter and a spittoon. I’m pretty sure they won’t catch the film’s allusions to Chinatown, all things Sergio Leone or Clint Eastwood’s early screen persona either. Well, it’s their loss I suppose. Still, no matter how Rango fares at the box office, it will find a warm place in the hearts of animation lovers, as it is a visual masterpiece that combines an astounding sense of design with a meticulous attention to detail that makes for something magical.

Rango (voice of Johnny Depp) is a chameleon who longs to be an actor but he’s really just a ham in search of an audience. He gets just that after a freak accident catapults him from the safety of a cozy terrarium into the cruel Nevada desert, where he stumbles into the ramshackle town of Dirt. Trying to find his footing, he’s asked the question every lizard suffering from existential angst longs to hear – “Who are you?” Thus, a chance to reinvent himself is served on a silver platter and Rango begins to weave a series of tales in which he casts himself as a ruthless gunslinger. Before you know it, he’s been made sheriff of Dirt and come under the watchful eye of the mayor (Ned Beatty), who may know more about the town’s water shortage than he’s letting on.

Verbinski has never been a narrative stylist and the film suffers, as most of his do, because of his penchant to take 20 minutes longer than necessary to tell his story. As written by John Logan, I’m not sure all of the pieces add up. Be that as it may, you need to brush aside any narrative concerns and bask in the astounding visuals on display. Perspectives are skewed (check out Rango in a glass Coke bottle), a Daliesque dream is glimpsed and the world of Leone’s westerns is recreated in loving animated detail and populated with imaginative and captivating creatures. Hired gun Rattlesnake Jake’s (Bill Nighy) scales glimmer in the sun and his tail’s been fitted for a revolver, Roadkill (Alfred Molina) is a quixotic armadillo who spouts salvation in cryptic riddles while the Spirit of the West (Timothy Olyphant) is a cinematic deity that connects the present with the past.

Suffused by Hans Zimmer’s Ennio Morricone-inspired score, the film is skewed more towards adults who can handle the story’s twists and marvel at its wondrous world. Here’s hoping those who see it will be inspired to explore Once Upon a Time in the West, A Fistful of Dollars, and other Leone features. This is a loving tribute to those films and hopefully Rango will serve as the impetus for another generation to discover and appreciate them.