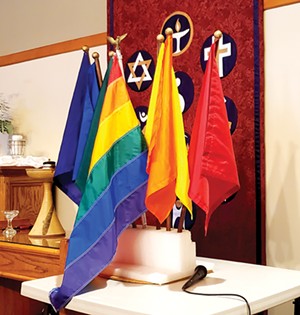 Gay members of the central Illinois community are working to better include other LGBTQ people in events and organizing. As the acronym to represent gender nonconforming and nonheterosexual members of society stretches to include the myriad of queer identities – many now prefer LGBTQIA to include intersex and asexual people – some in the Springfield area are similarly working to become more inclusive.


Faith leaders and community organizers gathered at the Abraham Lincoln Unitarian Universalist Congregation in Springfield last month for a forum on that topic. On hand were representatives of a dozen or more social service agencies and advocate causes. Topics included PrideFest (of which there are now multiple in the region), HIV testing and other offerings for vulnerable LGBTQ people.


The day of listening and conversation was hosted by the Coalition of Rainbow Alliances (CORAL) which is working at better communication. CORAL, an umbrella organization that exists to coordinate the LGBTQ community in central Illinois, recently undertook a survey of stakeholders regarding communication methods between leadership of the organization and its affiliates. The nonprofit plans to use the results to restructure over the next five years addressing some of the themes identified in the interviews – such as raising public awareness, coalition-building and increasing lesbian representation.


"People get caught in their own objectives, their own silos and that becomes more isolating," said CORAL member-at-large Rob Weis, who worked on the report with Timothy Bill. It was undertaken last year with the help of a grant from the Junior League of Springfield. CORAL was established in 2000, and current president, Jim Barr, said the idea was to help existing groups coordinate efforts, especially as the overall amount of organizations began to decline. "We need to be vigilant. And we need to be proactive," said Barr in reference to LGBTQ rights. "Plus, we want to be very service oriented." The organization is pushing participation in the census and at the polls as priorities this year.


According to the report, CORAL is seen as consisting of the "older, wiser, patriarchal" members of the local LGBTQ community. Weis said the group is trying to reach out to younger, more diverse members. At the recent forum it was noted that more inroads should be created for queer people of color.


CORAL has made significant steps toward better inclusion of younger members. Its PRISM project provides professional development opportunities to queer folks in the Springfield metro area.

PRISM – Professionals in Springfield Metro – has members mostly in their 20s and 30s. It hosts events related to career development and networking. Dustin Patton is a co-chair of PRISM and works as a pharmacy tech. He moved to Springfield from a rural town and learned about CORAL through outreach from a member. Now he's taking on the role of inviting new members.


"I love connecting with people, helping someone better themselves," said Patton. "It's been a rewarding experience to help my community and to get to know my community." Events have included social hours and yoga thus far, and are open to LGBTQ people of all ages. A new annual tradition is a kickoff party the night before the Springfield PrideFest, which will be celebrating its 10th year on May 16.

As the cause of LGBTQ rights and representation marches into the next decade, CORAL is actively working to remain relevant and supportive. Some potential next steps include a community calendar and website to increase visibility of efforts and events. Barr said the goal is getting "more people involved so that we can truly say we are a diverse group and an inclusive group."


• For more information on how to get involved with CORAL, you can join its Facebook group: facebook.com/groups/CoralSPI


• CORAL will host its annual gala on Saturday, March 28. More information can be found at: tinyurl.com/qnp75bt