Questions not limited to hat 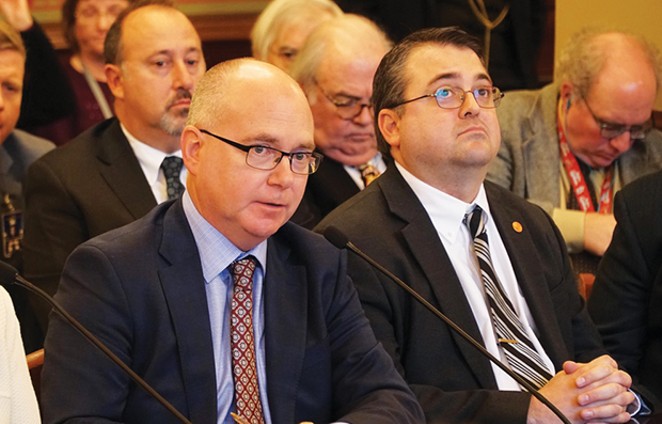 A stovepipe hat that purportedly belonged to the Great Emancipator isn’t the only artifact at the Abraham Lincoln Presidential Library and Museum that needs further research to flesh out provenance, museum officials acknowledged Tuesday under questioning by state lawmakers.

Eleven years after an appraiser raised questions about the authenticity of the hat and other items that were part of a $23 million purchase of artifacts by the museum’s private foundation from a member of the foundation’s board, ALPLM director Alan Lowe and state historian Sam Wheeler said that the institution has not studied the provenance of a clock that purportedly was in Lincoln’s law office and a fan that Mary Todd Lincoln allegedly took to Ford’s Theater.

Prior to the 2007 purchase, appraiser Seth Kaller in an email to foundation and museum officials predicted, correctly, that provenance questions would be raised about the hat, the clock and the fan. Quoting from Kaller’s email, State Rep. Jeanne Ives, R-Wheaton, on Tuesday asked those questions when officials from the foundation and the ALPLM appeared before the House Tourism, Hospitality and Craft Industries Committee.

“I’m just very curious about what you’ve done further and whether or not this collection is as authentic as it’s supposed to be,” Ives said.

Wheeler said that the museum has spent two months researching whether the hat is authentic, with inquiries extending as far as the National Archives in Washington, D.C. He said that his staff has read through thousands of newspapers in a so-far unsuccessful attempt to prove the hat actually belonged to Lincoln.

“When it’s going to be completed, I don’t know,” Wheeler said. “We’re really early in the process.”

The hat’s authenticity was publicly called into question five years ago, when the Chicago Sun-Times reported that a story of Lincoln giving the hat to a political supporter in Washington, D.C., was dicey because there was no evidence that the recipient had been in the nation’s capital while Lincoln was president. Provenance questions heated up last summer, when WBEZ radio in Chicago reported that DNA testing on the hat and an evaluation by historians, both done quietly, failed to prove the relic ever graced Lincoln’s head.

Wheeler and Lowe said that the museum plans to further study the provenance of the clock and fan. Mary Todd Lincoln gave the fan to someone who lived near her in Chicago, Wheeler asserted during the hearing.

“More research, frankly is warranted there,” Wheeler told lawmakers in reference to the clock, which was assigned a value of $325,000 in an inventory of nearly 1,500 documents and artifacts that the foundation bought from Louise Taper, who was then on the foundation board, in 2007. Unable to pay off a bank loan used to purchase the items, the foundation is asking the state for more than $9 million to settle the debt.
After the hearing, Lowe said that the museum will further study provenance of both the fan and the clock, but the hat comes first.

“We will proceed to those next two after we do what we can do with the hat,” the museum director said.
Why has it taken more than a decade after Kaller raised questions for the institution to closely examine provenance issues?

“In large part, that’s because we run a very busy institution,” Lowe answered. “Every day, we’re running a museum and library. Sam (Wheeler) and his staff have a ton of other things to do in terms of overseeing the research and collections at the library. We focused first on the hat. We will turn to the clock and fan. That’s part of what we do, but it’s not the only thing we do.”

Rep. Tim Butler, R-Springfield, criticized the museum foundation for what he said has been a lack of transparency. He also blasted a visit to the museum by FBI agents who conducted DNA testing on the hat.

According to the WBEZ report, the 2015 visit was kept under wraps. Lowe has said that he wasn’t informed about the DNA testing until this year, and he has criticized the foundation for not telling him sooner.

“I have tried to be helpful,” Butler said. “What has happened in the last several months is an absolute shame.”