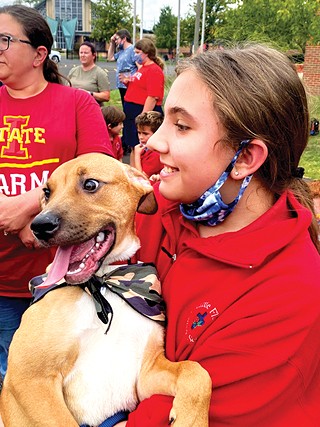 photo by Scott Reeder
The author's daughter, Caitlin, with Johnny.
"He's half Labrador retriever and half German shepherd," the volunteer said as she handed me the wiggling puppy. I looked into the mutt's shiny eyes and just shrugged.

A few months ago, my wife, a veterinarian, went into work on her day off to spay and neuter dogs from a local animal rescue. Since I already had an obligation that morning, she took our 10-year-old daughter, Caitlin, along.

"We'll just put her in an empty exam room with the puppies awaiting surgery while I'm back in the operating room," she told me.

Beforehand, the two of us told her that we already had enough pets, and we weren't going to adopt another. She could play with the pups but none of them were going home with us.

After spending a morning with one particular puppy she named Johnny, Caitlin was smitten. My wife, Joan, caved first and said she could have him, "if Daddy says it's OK."

I then became the subject of a two-week-long lobbying campaign that would put any Statehouse advocate to shame. Daily, sometimes hourly, Caitlin would present her case for why she needed that puppy. She even emailed me a PowerPoint presentation on why the dog should join our family.

I kept thinking if I held out long enough, she would lose interest and somebody else would adopt the pooch.

But her ardor remained undiminished and nobody else wanted that mutt. So, I gave in. When I went to pick him up, the volunteer said they knew little about him other than he and his littermates were found abandoned and that she just felt sure he was a Labrador/Shepherd mix.

But after he came home, he didn't grow much, and he seemed far too small to be either of those large breeds. Every night he would curl up by the dinner table and we would debate his pedigree.

My sister-in-law said she thought he was part Rhodesian ridgeback. My wife suggested pit bull. I felt sure he was part coonhound. But Caitlin would give him a hug and just say, "I don't care."

The ongoing debate reminded me a bit of a journalism dilemma.

Typically, reporters covering a trial will describe a jury by its racial and ethnic composition. Since reporters cannot talk to jurors during a trial, it becomes a guessing game. Is she Italian or Hispanic? Is he Black or biracial? Is Juror No. 10 an Indian American? Or maybe he's Middle Eastern?

We live in a nation where identity is increasingly ambiguous.

A few years ago, I asked a Chinese-American friend and a Korean-American friend who they considered to be the most famous Asian American. They both said: Tiger Woods. But it's doubtful a stranger looking into a jury box would ascribe someone with Woods' complexion that identity.

A few years ago, I took a DNA test and learned I was 99% of European extraction and 1% Native American. Other than being able to brag that I may be more Native American than U.S. Sen. Elizabeth Warren, I'm not sure what that test accomplished.

Genetic tracking isn't limited to humans. One can send a sample of a dog's saliva to a laboratory and learn its genetic makeup too.

So, after enduring multiple dinner-table debates about Johnny's pedigree, we mailed in a sample. The result: He's 17 different breeds.

He was only 1% Labrador and didn't have a drop of German shepherd blood. And despite my speculation and my sister-in-law's, there was no Rhodesian ridgeback or coonhound to be found in his lineage.

After hearing the results, Caitlin hugged her pup and said, "I don't care, I love him."

If only more people would view others that same way.

Scott Reeder, a staff writer with Illinois Times, can be reached at sreeder@illinoistimes.com.